When Jameel Rahim Shareef walks up to say hello you are immediately overcome with a sense of gentility, kindness and warmth. The Syracuse native who grew up living in Pioneer Homes (a part of Syracuse Housing Authority), has overcome challenges far and wide in order to make it where he is today: a young man on a full-ride scholarship who is making his name in sports journalism.

He is also a hard-working steam plant employee, and most of all, a passionate and grateful son who credits both parents as his backbone. If there’s one thing Shareef is certain of, it’s that one day he will help to give it all back. 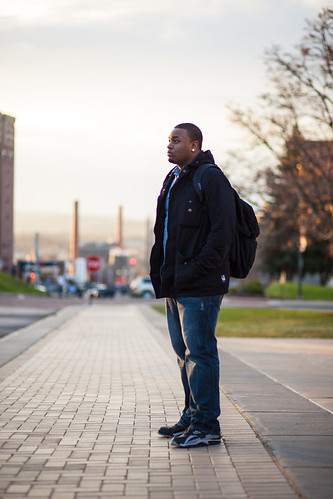 While studying at SU, Jameel Rahim Shareef also writes articles for Football Nation. In this photo, the steam plant is visible in the distance. | Jason Greene, Staff Photo

“I credit anyone who gave an effort to support me,” Shareef said. “Giving me different opportunities that I didn’t really have.”

Shareef’s mother, Tina, describes her only son. “He’s a very humble person,” she said. “I always wanted my kids to be better than myself. If they want to do better themselves, they need to seek someone they could see as a positive role model to look up to.”

It was through the help of mentors and positive influences like Shareef’s mother and father, along with The Stand’s own board member and music columnist, Reggie Seigler, that Shareef was made aware that he could apply for the Co-Generation Steam Plant Scholarship. A total of four applicants applied, according to Shareef. The requirements for an applicant are to be a resident of the Syracuse Housing Authority.

In late April 2010, Shareef was notified that he would be the recipient of the four-year scholarship that would pay tuition and housing. It also offered him a chance to work at the plant, which is just down the hill from the university.

“I was really excited,” Shareef said of the moment he found out that not only was he accepted into SU, but that he would be attending free of charge. At the time, the Henninger High School senior was a football player and thought he would continue his athletic career while in college. However, that idea began to take a different path when he was placed into the Communication and Rhetorical Studies program. After what Shareef describes as a “difficult” first year adapting to the academic rigor, he began to find solace in his program and decided to buckle down.

“I had planned on playing football here,” Shareef says, “… but I decided to focus on my grades and look into reality.” The CRS program provides him an opportunity to fuse his passion for sports with his newly discovered love for writing.

Christopher Perrello, an SU professor in the CRS program, finds that students like Shareef are the ones who excel both in and out of class.

“I’ve witnessed Jameel’s growth over the semester in regards to his interpersonal communication and writing skills,” Perrello said. “Perhaps most impressive is (his) dedication to his course work, which illustrates his value in higher education.”

In addition to being a full-time student, Shareef has worked the past three summers as a part-time entry supervisor at the steam plant. He monitors maintenance workers on the field with a gas monitor when they are entering manholes on the SU campus. The responsibilities and work ethic are things Shareef says he’ll hold with him.

“I’ve learned to be consistent and wake up at a decent time,” he said, “…to find people that I can connect with both in and outside of the workplace, people you can talk to.”

Tim Winterfield is Shareef’s supervisor. “He’s a great worker, always smiling and upbeat,” Winterfield said. “You know he’s just one of those guys that is going to make it.”

Those he works alongside during his work week in summers have become some of his many supporters.

“They ask how I’m doing and about school,” Shareef said. “When I was writing articles during the summer, they would ask me about it and then go and read it.”

The articles Shareef refers to are those he has written for national sports websites Football Nation and Pro Player Insiders. He found them through SU and decided to submit articles for both — positive that his lack of professional writing wouldn’t give him a chance to write for either. Now on his 10th article for each website and more than 4,000 article views on Football Nation, Shareef is on a path to his dream career as a sports journalist. 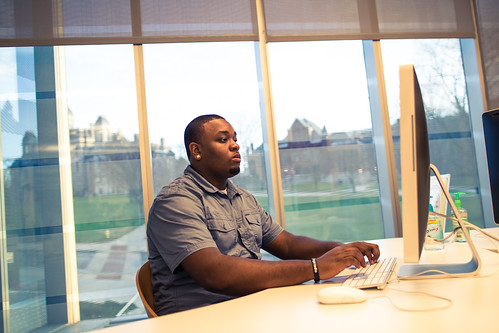 Jameel Rahim Shareef, a junior at Syracuse University, is a Say Yes Scholar and recipient of the Co-Generation Steam Plant Scholarship. His career goal is to become a sports broadcaster. | Jason Greene, Staff Photo

“I’d like to see myself at ESPN or working with some NFL network affiliate or a local broadcast company,” Shareef said. The Bengals mega-fan also wouldn’t rule out working for his dream team in Cincinnati if the opportunity were to arise. In fact, Shareef is hopeful he can help inspire others from the South Side that such opportunities are not out of reach if, according to him, “you stay focused.”

“You have to surround yourself with people that have the same goals as you,” he said, reflecting on the guidance he received in his youth. For example, through the Tenant Assistance Program, he realized the right path to take.

Shareef is determined, as his mother describes him, to help others as he has been helped himself.

“He’s a gift,” she said. “Wherever he ends up in the long run they’ll end up loving him just like the others because you can’t help but like and want to have him in your company, that’s just how he is.”