In the cafeteria of Bethany Baptist Church, more than 200 students, parents and teachers sang, danced and rapped all for the same purpose — to learn how to be better writers.

Cork started the workshop by posing a simple question to the students: “I need to see a show of hands,” he said, “who’s going to college?”

Immediately, a sea of hands shot into the air. 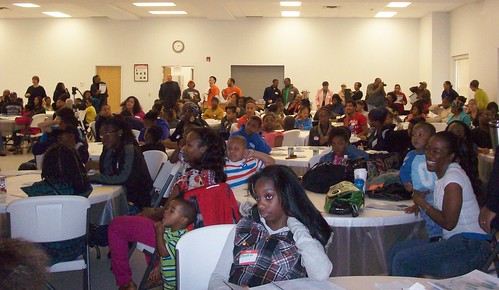 This was largely the purpose of the workshop — to prepare Syracuse City School District students in third through eighth grades for their academic futures, including the upcoming New York English Language Arts exam, a test that measures students’ reading and writing skills.

The workshop was co-sponsored by Syracuse Say Yes to Education, an organization that works to increase academic performance of students in urban areas.

Cork’s presentation included music, singing, dancing and rapping. He interacted with many students, parents and teachers, and kept the audience thoroughly engaged by including well-known music and pop-culture references throughout the presentation. On multiple occasions, Cork had everyone out of their seats and dancing.

During his musical workshop, Cork weaved in lessons related to essay writing, including tone, capitalization and punctuation.

“We say ‘No’ to errors because mediocrity is not an option,” Cork told the students.

He emphasized that many times, students need “more than just a grade” in school. Cork said it is important that teachers encourage their students and offer them occasional compliments, in order to prevent students from giving up on themselves.

In 2009, Cork held his workshop with 10 different Syracuse schools, as well as the greater community. He said after his workshop, students in the participating schools improved their academic performance by 10 to 20 percent. The schools that he did not work with, Cork said, either maintained the same performance level, or got worse.

Syracuse resident Vanessa Ross, 51, brought her granddaughter to Cork’s workshop. She said she was impressed with the way Cork interacted with the students. 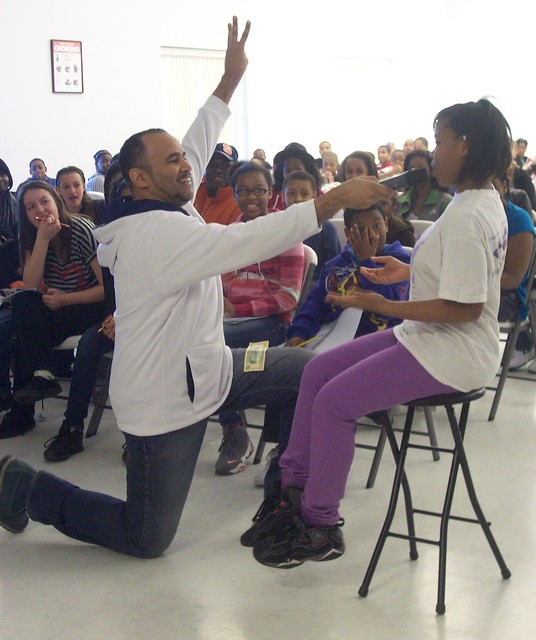 Erik Cork asks a student to name 10 excuses students give as to why they don't have their homework. She answered, and he gave her $10.

This was especially impressive, Williams said, because Saturday was the first day of the students’ Spring Break. To see so many students sacrifice their time to come and learn was outstanding, she said.

Williams said although Cork used a lot of humor throughout his workshop, she hopes students took away some of the necessary skills to better prepare themselves academically.

She said she thinks Cork’s workshop was important to hold in Syracuse, as the students in the school district have been drastically underperforming.

“Part of our mission is to be a support to the community, and we know the situation with our students and the graduate rates is basically at a crisis level,” Williams said. “And we want to be able to give the community an opportunity to show that they are concerned about their children. This is our village.”