A sea of brown cardboard boxes covered the second floor of Beauchamp Branch Library on a recent Saturday, decorated with cascading ribbons and hand-drawn logos. These weren’t ordinary packing containers.

Every branch of the Syracuse City Library system hosted the Cardboard Challenge on Oct. 11, inviting children from across the city to showcase their own makeshift games, complete with corrugated ping pong and fishing. The event was inspired by Caine Monroy, a Los Angeles child who designed and managed his own cardboard arcade in 2011, which sparked a viral documentary about his project. Local library officials said the Cardboard Challenge also was a push to get more youth off the streets and into reading environments. 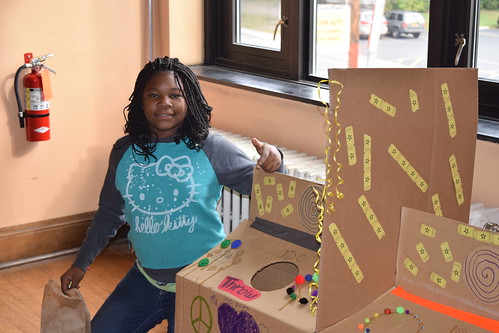 Sierra Kubinda, 12, was one of the participants who created her own cardboard arcade cabinet at Beauchamp Library Oct. 11, 2014 during the Cardboard Challenge. | Mike Mahardy, Staff Photo

“The kids came in with their own ideas,” said Anne Gregory, a children’s librarian at Beauchamp. “They figured out creative ways to make these projects work, and we’ve had a lot of impressed people come through here.”

Between 40 and 50 people attended –– an overwhelming number in the small space, but a great problem to have, she said.

The creations ran the gamut of classic arcade installations. One child created a knee-high platform to play air hockey; another participant fashioned a small box into a miniature soccer field, complete with plastic balls that players could hit with their fingers. And Sierra Kubinda, a South Side resident who frequents Beauchamp, made her own version of Skee-Ball.

Sierra is a 12-year-old member of PEACE, Inc., a nonprofit at 217 S. Salina St., that works to strengthen family relationships, provide children with foster care and pair children with big sisters and brothers. Sierra was paired with Lisa Baker, from nearby Manlius, six months ago; the two collaborated for a total of four hours to create Sierra’s Skee-Ball cabinet.

“We had a totally different idea when we started,” Sierra said. “But then we figured out we could make this into a Skee-Ball game, and made a few changes to make it more fun and interesting.”

The contraption was composed of several boxes, then covered with decorations that spanned the entire color spectrum. Players rolled plastic balls up the sloping board, over bubble letters spelling “Sierra” and “Lisa,” and into targets Sierra drew on the upper half. Hit the smiley face: 10 points. Hit the peace sign: 50. More daring players had the option of tossing the balls into a small hole on top, and the ones who struck the target received a 100-point payoff.

“She was the brains behind the project, I was mainly there for encouragement,” Baker said. “It was a really good chance to spend time together, and for Sierra, and the other kids, to flex their creative muscles.” 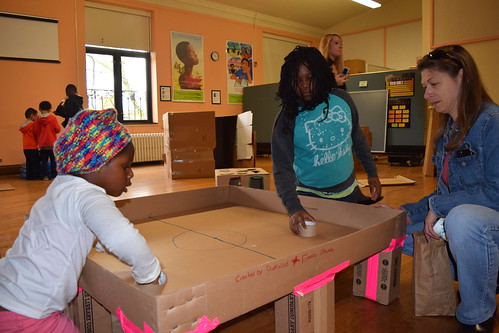 Anyone who visited Beauchamp could play. And it wouldn’t be an arcade without prizes. Sierra won 300 points for catching a cardboard fish, with a cardboard rod, from a blow-up pool. The points netted her a kazoo, mini dinosaur figurines and even a navy blue T-shirt.

The Cardboard Challenge, and the librarians who orchestrated the citywide event, had other aims in mind as well. Janet Park, branch manager of Mundy Library at 1204 S. Geddes St., said she was hoping to not only attract residents for the two-hour attraction, but also to encourage future visits.

Park said she and the other librarians wanted to see new children join the library environment. By creating the arcade atmosphere, complete with all of its rewards and stimulating activities, Park said she wanted to get the kids hooked on reading as well.

A lot of children visit Mundy, so the “interactivity on display” would hopefully foster more creative pursuits, Park said. “It’s not like watching TV,” she said. “It’s something they can dream up.”

Park, Gregory and the rest of the librarians who coordinated the Cardboard Challenge said this was the first time the branches had a simultaneous event across the city. It took a lot of planning, Park said, but the librarians wanted to create an empowering environment.

“There’s an entire network set up to facilitate this content creation,” Park said. “Maker spaces, 3D printers, new ideas –– anything we can do to move these things ahead. It’s really worthwhile to have planned things like this within our network.”

After Sierra’s fourth trip to the prize table, behind which librarians were handing out bags of popcorn and 300-point T-shirts, she played familiar tunes such as “Rudolph the Red-Nosed Reindeer” and “Happy Birthday” on her new kazoo. She stood next to her creation as the plastic balls rolled out of the hands of adults and children alike.

“Today, people are playing my game,” she said. “Not the other way around.” 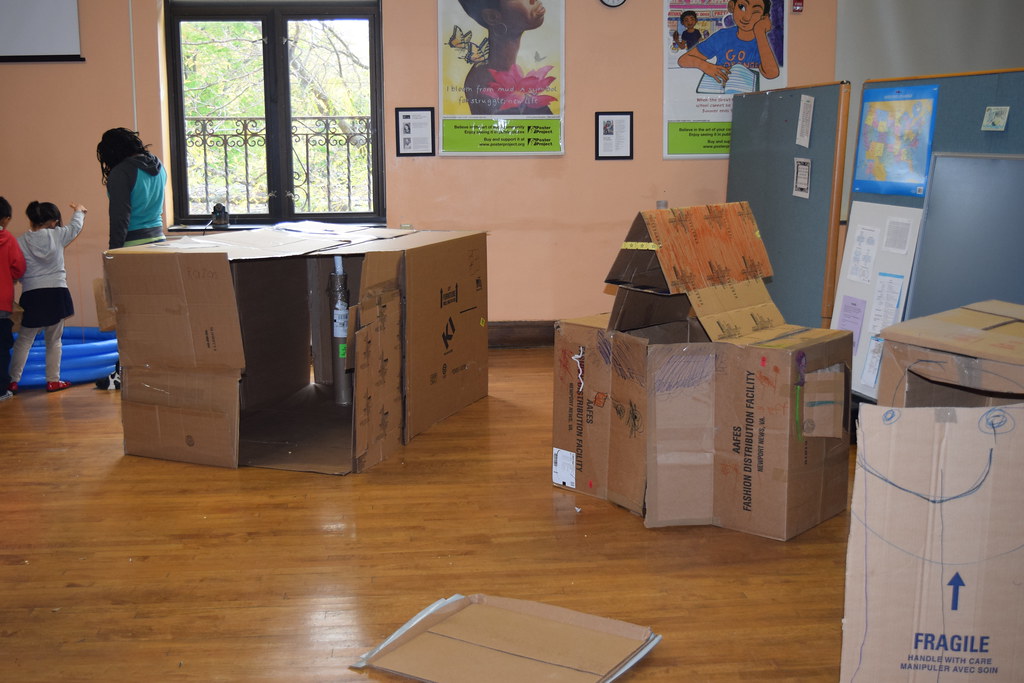