For Kayla Corron, missing work is devastating. “I had kidney stones so I had to take work off all last week,” said Corron, 23, who works at the Dollar Tree on West Seneca Turnpike on the South Side.

The day before Valentine’s Day she was back on the job, inflating hundreds of heart-shaped balloons.

“That’s $150 I was out of so that’s why I’m short on rent and I can’t pay my phone bill,” Corron said. She shook her head in grim resignation and released another balloon into the pink cloud forming above her. “And now I lost money. It sucks.” 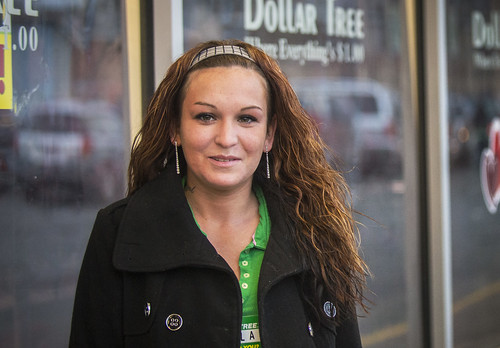 Kayla Corron, a single mother going to college and working a minimum wage job, says she thinks the raise in minimum wage would make a positive impact in her life. | Joshua J. Wahl, Staff Photo

Corron works five days out of the week at the store making minimum wage. The other two days she spends at OCC studying to become an RN. And when she’s not working or studying, she devotes her time to her 4-year-old son.

Weeks ago, in his State of the State address, Gov. Andrew Cuomo proposed increasing the minimum wage from $7.25 an hour to $8.75 an hour. President Barack Obama — in his own State of the Union several weeks later — called for an increase in the federal standard to $9 an hour from $7.25. Federal law is $7.25 an hour, minimum; states must meet that, or exceed it.

Not long after Cuomo’s address, Democratic Assembly leaders introduced a bill that exceeded Cuomo’s call; it would raise the minimum hourly wage to $9 in 2014.  Assemblymen Bill Magnarelli, D-Syracuse, and Sam Roberts, D-Syracuse, support the bill.

Not everyone agrees raising the minimum wage is a good idea. Eileen Brophy is the president of Brophy Services, a janitorial service based in Syracuse that employs 115 people. Although all of her employees make above minimum wage, she said if it increased she would in turn be inclined to raise their salaries as well.

Increasing what she spends on their salaries would force her to raise the prices she charges clients, and for a business that is not a complete necessity to its clients, this could be a detriment, she said.

“I think to a business like mine, and any other janitorial industry, this is going to be very hurtful,” Brophy said.

The corporate office of the Dollar Tree could not be reached to comment on how an increase in the minimum wage might affect its business.

Don Dutkowsky, professor of economics at the Maxwell School of Citizenship and Public Affairs at Syracuse University, said he can see how an increase in the minimum wage could harm small businesses in a state he says is already unfriendly to them. However, he said the positive outweighs the negative. 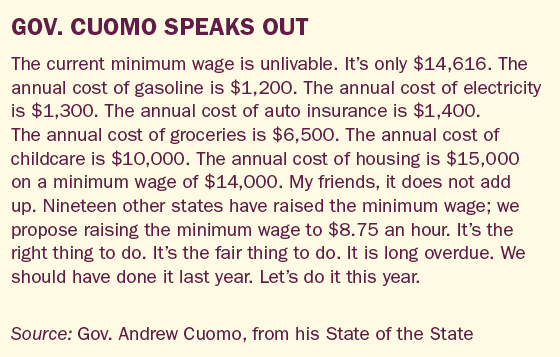 “It encourages people to seek jobs with the idea that, ‘OK, if I work 40 hours a week and play it right, I can be out of poverty,’ ” Dutkowsky said.

At the same time, however, he has two qualifiers he thinks would be important to include. The first: finding another way to help businesses make up for what it could lose by raising wages. The second: limiting the increase to employees 18 years old and above.

Not so, according to 17-year-old Alexandra Huckle, who has two jobs — one at the Rite Aid on West Seneca Turnpike and the other as a night janitor. The high school senior says she pays all of her own bills, preferring to be independent of her parents. She would like to see a raise in her minimum-wage salary, but she also says she doesn’t think it would make very much of a difference.

“I think it would make it a lot easier, not being cut close with money all the time, I guess,” Huckle said. “But I think that other prices are going to rise with it so I don’t think it would do much.”

Someone working 40 hours a week on minimum wage today makes about $15,000 annually. Increasing the wage would add about $3,000 to that salary. For Corron, an increase in minimum wage wouldn’t solve all her problems, but it would help.

“Just having a little bit more,” Corron said. “Not struggling, worrying when I’m going to get my next paycheck so my car insurance isn’t going to be late or my phone bill’s due and my phone’s going to get shut off.”