Corcoran Seniors Move on to Next Journey

The 46th commencement ceremony for students of the Thomas J. Corcoran High School filled the Civic Center June 23. A new journey is about to begin for Syracuse’s young adults, a chance to take what they have learned and share it with our city. 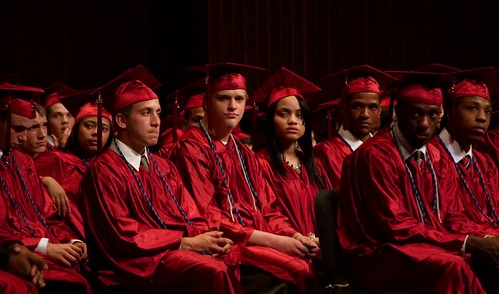 In the excitement of the moment of celebrating the culmination of 12 years of effort, it may be difficult to restrain the emotions that rise to the surface. In years past, Corcoran commencement ceremonies had been hindered by disruptive displays of emotion. Based on the disruptions, Corcoran instituted mandatory etiquette meetings in 2005 for the parents of Corcoran graduates. The meetings were designed to curb disruptions during the course of the ceremonies by presenting a brief tutorial in etiquette.

When asked his perception of how the etiquette instruction would potentially affect this year’s ceremony, Michael Henesy, Syracuse City School District’s coordinator of communications, stated “The parent meetings regarding graduation have been in place for eight years now, so we do not expect this year’s ceremony to be any different.”

The ceremony marking the graduation of the Corcoran class of 2011 flowed effortlessly without so much as a hint of disruptive behavior. Opening words were presented by Syracuse Mayor Stephanie Minor and New York State Assemblyman William Magnarelli. As the focus of the ceremony shifted from the speeches of local politicians to the words of the graduates, the class salutatorian and valedictorian each took the stage.

The class salutatorian, Vasiliy Pechenyy, spoke of the journey from the first days of school to the culmination at graduation, highlighting the journey by saying “We don’t drive hot wheel cars, but drive our very own.”

The class valedictorian, Alicia Cobb, discussed the combined journey of the 2011 class and the closeness of the group. “No one is alone in their journey,” she said to her fellow students.

A controlled eruption rose forth from the crowd as the graduates were announced.  Respectful displays of emotion showing support and pride for those celebrated in their accomplishments garnished the night’s events. Congratulations offered, successes shared, the Civic Center grew quiet once again, holding a marker for those moving forward to shape the city of Syracuse.

– Story and photos by Jeremiah Howell