Timothy Bryant was a single father working as a massage therapist and director at a Syracuse spa when he met a client who was a Syracuse University professor. As the professor learned more about Tim, she suggested to him that a degree in public health might feed his passion for caring for people.

“I had obtained my GED having only completed 10th grade, so college was something I thought was beyond my capability,” Tim said. “I wasn’t confident I’d succeed, but I entered with an open mind, determined to see what would unfold.” 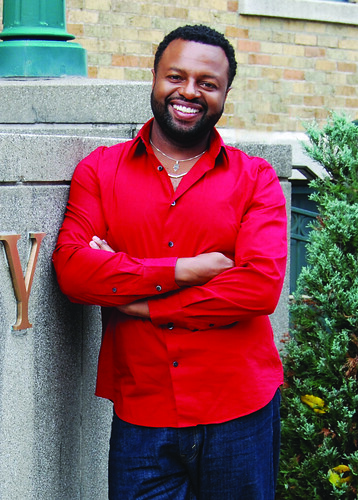 > Timothy Bryant is currently studying public health at SU, and he plans to earn a Ph.D. in sociology. | Provided photo

What unfolded in Tim’s college career would surpass his wildest dreams. Now in his senior year as a part-time SU student majoring in public health, Tim, 47, has made the dean’s list every semester. He has traveled abroad — to Europe, Africa, six countries, and a host of cities, towns and rural settlements.

“The opportunity to travel abroad has been a highlight of my academic career,” Tim said. “I have been immersed in cultures that I would have no other way of fully understanding or appreciating.”

Tim was inducted into Alpha Sigma Lambda, an honor society for non-traditional undergraduate students, in 2011. His crowning achievement came last year, when Tim and three classmates were presented with the Chancellor’s Award for Public and Community Service for a smoking cessation program they designed and implemented at the Syracuse Community Health Center.

Tim’s college experience was made possible through the Arthur O. Eve Higher Education Opportunity Program, which provides academic and financial support for students whose educational and economic circumstances would prevent them from attending SU. University College has the only HEOP program for part-time students in New York state.

“HEOP not only provides the financial means to be able to return to school, it gives students the necessary tools to acclimate into the academic environment and is a tremendous support system for the entire undergraduate process,” Tim said.

Tim’s early years did not set the stage for a bright future. Growing up in a tough urban neighborhood in Jersey City, New Jersey, he was twice the victim of violent crime — once at age 9 and again at age 14. This led to recurrent post-traumatic stress disorder, which cut short his educational pursuits.

“PTSD wasn’t widely understood at the time,” Tim said. “I found myself unable to function socially for several years, and as a result I was unable to complete high school.”

Tim worked to understand and treat his disorder. This led him to massage therapy, in which he’s been certified for more than a decade.

“Part of the work I do is helping individuals heal from grief and trauma through touch therapy,” Tim said. “I also do sports-related massage work, injury prevention and healing, and everyday stress relief.”

This spring, Tim will do his internship in a study that examines trauma associated with gun violence and gang culture in Syracuse.

He plans to eventually earn a Ph.D. in sociology and hopes for a career in policymaking — “something that will directly impact people and the community,” he said.

For now, he’s focused on his undergraduate degree.

“My advice to anyone who has the desire to attend SU is take that leap of faith, keep an open mind, and embrace every moment,” Tim said.

— Article submitted by Mary Beth Horsington, an employee of the University College of Syracuse University
2015-02-09
The Stand
Share !