A one-man recycling operation picks up recyclables from residents

A year ago, Tyrone Cannon sat in his living room joking around with friends, drinking a few beers. “Save your bottles,” he told them. “One of these days I’m going to start a bottle return business.”

Today, he runs Cannon Street Recycling, a door-to-door pickup service for can and bottle returns. 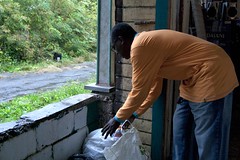 It started with neighbors who would bring bags of cans and bottles to his door in exchange for the 5-cent deposit on returns. Then, Cannon turned his childhood home next door into his “office.” The gutted-out house now serves as a bottle return station and sorting center for his new business.

“That used to be my grandmother’s room,” Cannon said, laughing as he gestured toward a room filled with bottle-filled bags.

In New York state, individuals get 5 cents per can or bottle for their returns. Businesses such as Cannon’s get that back, plus a 3½-cent handling fee.

Cannon has collected enough cans and bottles to cover the floors of four rooms in his sorting center. On an average sorting day, when distributors come to his house for pickup, Cannon can fill one room alone with more than 900 empty glass beer bottles, stacked ceiling high in cardboard boxes.

Each bottle and can is sorted by brand and color. After he sorts everything into piles in the main room, Cannon stuffs everything into oversized white trash bags. He said he easily goes through 300 bags each week.

“There’s no end to sorting, really,” Cannon said. “I would have to shut down completely for about a week or two to really get everything down to nothing.”

He advertises his business using word-of-mouth, depending on his customers to tell their friends and neighbors.

“We like it,” said Janet Bacon, a resident of the Toomey Abbott Towers complex for 10 years. “It’s very convenient.”

Bacon, who doesn’t have a car, typically takes the bus to Wegmans. In the past, she’s tried to combine her bottle return trips with her shopping trips, but she said it’s been a hassle.

“A lot of times Centro won’t let you take a lot of cans on the bus,” she said. “And the [Toomey Abbott Market] doesn’t take them unless you buy their brand.”

“Basically that’s what it is,” Cannon said. “It just cuts out all the inconvenience. It keeps them from having to stand in line and return all the bottles and then go do their shopping.”

Cannon said on a typical pickup day, he gets returns from 10 to 15 people just at Toomey Abbott.

Although he’s always on call, Wednesday and Friday are Cannon’s pickup days. The rest of the week he leaves for sorting.

He tracks every can in his head. When he goes out on pickups, Cannon fills his large white moving truck with trash cans and bags for sorting. After making a count, Cannon takes a wad of $1 bills out of his front pocket and pays out the normal 5-cent return for each can or bottle.

On average, he said he gives $100 worth of bottle returns to his customers each time he goes out on one of his runs.
“It’s more convenient,” said Rasta Muhammad, a resident at Toomey Abbott Towers. Muhammad uses Cannon Street Recycling once every few weeks. A diabetic, he said he goes through 14 to 16 gallons of water each month. This time around, Muhammad returned more than 200 plastic water bottles and soda cans.

“I never went around to other bottle returns to see how they did it or nothing,” Cannon said. “I just did it.”