As they walked down toward Onondaga Creek in dry shoes, a little after 8 a.m. on a sunny September Saturday, Bob Graham and Steve Seleway remembered what the water had looked like when they began hauling trash out of the polluted channel. 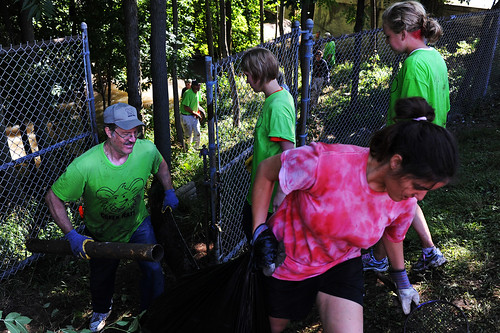 “When we first started, it was like an obstacle course trying to canoe down here,” Seleway said. “There was 100 years of junk thrown in the creek — we were dodging stuff. Now you can just go down and you won’t hit nothing or see nothing much the whole way.”

For nine years, Graham and Seleway have been cleaning up the creek with a motley crew of volunteers, now known as the Creek Rats. They’ve come from all around the Syracuse area — from the South Side to Eastwood and Clay — and have cleaned from the Kelley Brothers Memorial Park in Nedrow down to Kirk Park. In years past, the crews have consisted of as many as 50 people. A few hundred people have joined in over the years.

“If you canoe the creek, you can see the difference. There’s almost no garbage in the sections that we’ve done,” Graham said. “Our goal is to make the water readily navigable so people will start to canoe and kayak it. And the more they do, the more interest and support there’ll be for cleaning it.”

The 26-mile creek starts near Tully and flows into Onondaga Lake. It winds through the South Side for almost three miles, peeking out from beneath bridges when not hidden by trees.

On one September Saturday, the Creek Rats divided themselves into two crews: the land crew and the water crew. The 15-person-or-so land crew drove to the day’s endpoint, a rented trash bin in a parking lot beside Dickerson Street’s bridge, and trudged along the muddy shores with buckets and litter grabbers.

Meanwhile, the 11-person water crew dragged six canoes down a Kirk Park hill, plopped them in the water off a four-foot ledge and jumped right into the silty currents — they were going to get wet anyway.

For the next two hours, they paddled down the waterway, tying their canoes to trees before wading through the waist-high water to snag or pry out a piece of trash. A couple of the trash-filled canoes took on water and almost capsized — but that’s normal, some veterans said.

“When you get to the downtown portion of the creek, there’s just an ungodly amount of stuff in the water,” he said.

The Creek Rats are also working to clean up the creek for the city’s new Creekwalk, a scenic trail that now traces from Onondaga Lake to Armory Square. The path is supposed to expand further southward to Kirk Park in the future, said Andrew Maxwell, the city’s director of planning and sustainability. There’s no estimate on how much the extension would cost yet, he explained, but the city is hoping to receive federal or state money in the coming years to begin design and construction.

People have begun to safely canoe and kayak where the Creek Rats have finished. Bradd Deitz, a South Side resident who’s helped haul the trash for the past nine years, said he enjoys paddling down the creek from time to time and forgetting he’s in the middle of the city.
“The wilderness around the creek is just so amazing,” he said. “Not nearly enough people know about it.”

When the two hours ended on the recent Saturday outing, the water crew returned to the shore muddied, sopped to the stomachs and with canoes filled with trash: two shopping carts (one of which was particularly pesky to pry out), a couple of computer monitors, a child’s bicycle and miscellaneous junk and rusted metal. All together, the haul filled about a third of the trash bin. The haul from this year didn’t fill the two bins it has in the past.

And that’s the repayment for the hard, wet work, Deitz said: admiring what you pulled out and watching as the amount that remains to be hauled goes down.

Graham joked he had another reward in mind.

“I just want my dry shoes,” he said with a tired smile.