Volunteers put in more than 400 hours to pull off celebration

Dr. Rick Wright, MC of the event gave a little history behind what makes Juneteenth so special. On June 18th and 19th, 1865, slaves in the state of Texas were finally set free. The Emancipation Proclamation had set all slaves free two years prior, but not all of the states listened. June 19th , 1865 marked the day when all African Americans had been set free. The Juneteenth 2013 celebration celebrated this day, and people – who have gone many times before or people who have never attended – joined in. 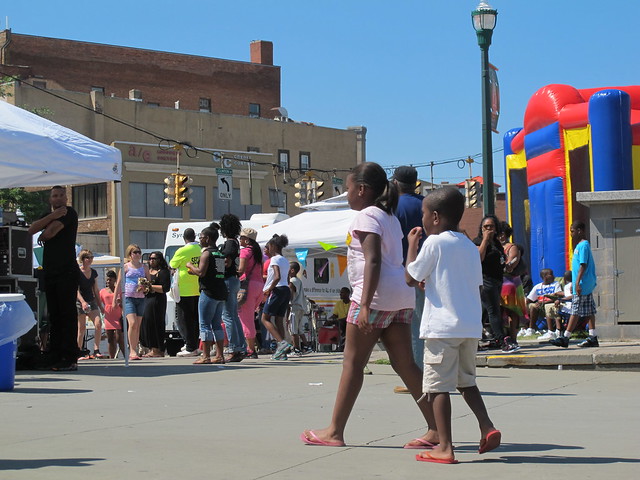 Attendees explore the various offerings during the 2013 Juneteenth Celebration in Clinton Square in downtown Syracuse.

Mari Kjar was already downtown to go to a restaurant and saw the celebration. She didn’t know what they were celebrating, but she said she loved seeing people gathered together – either around the stage or in other places around Clinton Square. Kjar found it interesting to learn about the different cultures. For other people who had celebrated Junteenth in the square, this celebration left many with the same favorite detail.

“We can always get along with one another,” said Jane Russell, a lively woman who could be seen visiting with others or up on stage, always with a smile. Russell has celebrated Juneteenth in Clinton Square three times.

Corrine Saddler feels the same. Sitting on a bench with the echo of music coming from the stage, she explained that she has always come to the celebration. Saddler even recalls when the celebration was held on South Avenue. 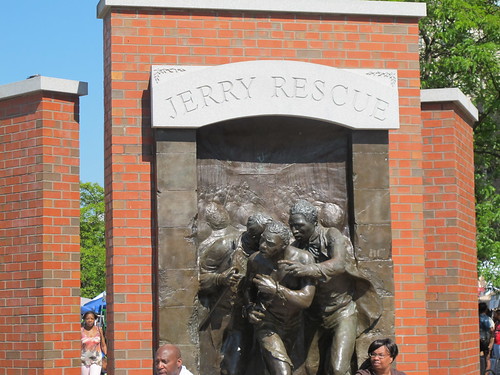 A statute in Clinton Square displays the Jerry Rescue. The Jerry Rescue, on Oct. 1, 1851, involved the daring, public rescue of a fugitive slave who had been arrested the same day in Syracuse during the anti-slavery Liberty Party's state convention.

“To me, it’s more for all of the nationalities. We all are brothers and sisters,” Saddler said. “Juneteenth means the same thing for groups at different pavilions. But there is a need to educate every brother and every sister.”

Chairman of the Juneteenth Board Duane Owens said the event is fully run through  donations and all board members work for free to put together this event. “Volunteers put in more than 400 hours,” he said.

Various pavilions were set up throughout the square including a Kidzone, food court and section with health pavilions.

Mary Shick, who works for the Southwest Community Center, came out with her crew to represent programs that the center offers. The outreach that Southwest Community Center is making is important because one of its focuses is to supports prevention of alcohol or drug abuse. The center is an after-school program that helps different children stay off the path of abuse by providing them with different activities.

“Keep youth busy. If you show them respect, they’ll show you respect,” Shick said. “There needs to be an adult role model,” she added, explaining that if there is a role model to show them that there is more to drugs and other things, then these students will be less likely to abuse drugs or alcohol.

Pamela Weinberg,  director of Youth Services at Center for Community Alternatives, is trying to accomplish something similar. Her group advocates against violence. Homicide in Syracuse this year is at 11 people. Juneteenth was the perfect event to prevent further violence, she said.

“Juneteenth is a great way to spread the word for alternatives to use instead of violence,” Weinberg said.

And what a perfect example the Juneteenth celebration sets. People coming together for one day, and despite their differences in culture or beliefs, they smile, laugh and enjoy each other’s company. Exactly the type of role model Shick was talking about.

— Article and photos by Elyssa Stallcup, sophomore in pre-journalism and mass communications at Kansas State University