Residents of the Oxford Street Inn, a men’s shelter run by Catholic Charities on the South Side, over the years have consistently had a favorite destination to spend the early mornings: the Samaritan Center, a soup kitchen in downtown Syracuse. Their consistency may partly have to do with the fact that there really aren’t many places to go to grab a free meal every weekday.

Mondays through Fridays many of the shelter residents take the half-an-hour trek to make it on time to breakfast, served at the center between 7:30 and 8:30 a.m. One of the issues of the center’s newsletter, mailed to potential donors, read, in rhyme form, “The Samaritan Center, where the elite come to eat.”

On the morning of Dec. 28, when the elite came to eat, they noticed something different. A somber mood permeated the center. Its staff and volunteers were hugging each other. Soon the kitchen’s guests found out the reason why. When their eyes turned their attention to a blackboard on the north-side wall of the dining room, they met an announcement on the blackboard, which read, “It is with sadness that we let you know of the passing of Dan Wade last evening. May he be in fine Irish pastures.” 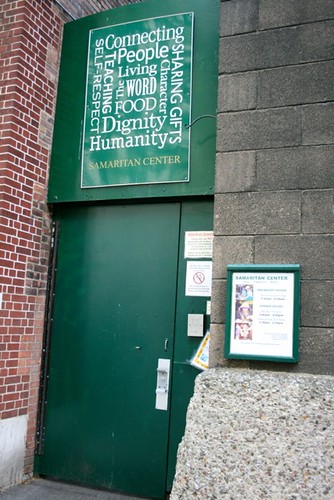 Dan Wade was operations manager at the kitchen up until late November, when, at 75 years old, he decided to end his career.

“He resigned because of lung cancer,” said Lori Lichorobiec, development director at the center. “He smoked.”

Current Executive Director Mary Beth Frey said that Wade had worked at the center for 14 years. He served during her tenure as well as those of former executive directors Randy Wolken, who hired him, and Dale Johnson.

He looked somewhat embarrassed early this year when Julie Gilbert, resource and referral specialist at the center, led the staff and patrons in singing “Happy Birthday” to him on Saint Patrick’s Day. This, along with Wade’s proud Irish stock, help explain the last sentence in the announcement of his death posted on the blackboard.

With an under-the-radar personality, Wade shied away from the spotlight, which at the center meant the counter and table areas. Instead, he sought refuge inside

the kitchen. He emerged from it only for activities such as bringing out a serving tray to replace one out of food or to break up a fistfight between rowdy patrons.

Sister Mary Lawler, a Catholic nun who frequents the center, said she once saw Wade come out to confront a guest who had thrown flood on the floor. “Dan ordered John [the guest] to leave the premises immediately and banned him permanently from the Samaritan Center. Dan then threatened the man with calling Dan’s nephew, a big man, if the guest ever showed up again.”

Frey said that prior to his death, Wade had been on the waiting list for one of the 15 private bedrooms at Francis House, on the North Side. He finally secured a spot in the care-giving facility that “provides a home and a supportive extended family to people with terminal illnesses with a prognosis of six months or less to live.”

–- Article by Miguel Balbuena, Community Correspondent for The Stand