Nearly 700 Central New Yorkers attended the I-81 Challenge Public Workshops held May 3, 4 and 7 at the OnCenter to learn about the interstate highway, its condition, how it’s being used and by whom. Citizens took the opportunity to give extensive and meaningful input about their ideas and desires for the highway’s future design by drawing, diagramming, writing, discussing in breakout sessions and talking directly with workshop staff.

“When people ask me if the workshops were successful, I tell them that we now have a vast number of opinions and ideas to review over the next several weeks,” said James D’Agostino, director of the Syracuse Metropolitan Transportation Council (SMTC). “That was the whole point of the workshops — to find out what the community thinks about the future of I-81.”

The next step for SMTC and New York State Department of Transportation (NYSDOT) staff will be to digest and categorize all the information collected, and develop a summary report that will include a broad set of options for further investigation and a set of criteria or goals for evaluating them.

This is expected to take several months, given the volume of input received.

Bill Egloff, NYSDOT’s project planning manager, credits the Central New York news media for making the community aware of the impact and importance of the project. “News coverage of the workshops was so extensive that we feel confident that citizens with concerns, ideas or strong opinions knew to attend.”

“I think the community discussion has gotten off to a terrific start,” added D’Agostino. “For me, it was gratifying to see the number of young people who came and participated. After all, they represent the future of Syracuse and Central New York, and so they have a large stake in the eventual outcome.” 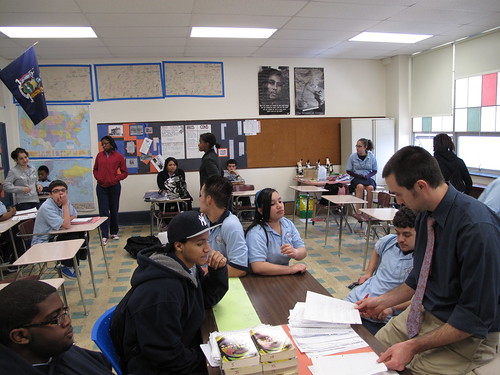 Student's in Nicolas Salibrici's class at Syracuse Academy of Science Charter School attended the I-81 Challenge Wednesday, May 4. -- Photo by Ashley Kang

“An entire class of high school students attended, as did the Onondaga Earth Corps, a local youth group. Some of the kids asked really astute questions,” said D’Agostino.

“People’s evaluation forms indicated that attendees overwhelmingly found the workshops valuable,” said Egloff. “One of the biggest surprises for me was the number of people who came back for two or all three days. All the effort put into conducting these workshops was clearly worthwhile.”

While the final workshops report won’t be completed for a few months, SMTC planners and NYSDOT staff agree they got invaluable input on what people want to see I-81 achieve, regardless of the form it takes. SMTC Principal Planner Mario Colone offered his initial assessment that “From a quick scan of workshop input, people seem to prioritize quality of life most of all, but safety and improving the transportation network are also high on their list.”

According to D’Agostino “numerous people told me they came with preconceived ideas about what they wanted to see happen, but after the workshop, they left more open minded. That fact alone means a lot to the people who staffed the eight information stations, as it shows they did their job of educating very well.”

“I think our report will make interesting reading,” said Colone, “for the wide variety of ideas alone. People didn’t think about I-81 just as it is today. They brought a variety of ideas to the table including more mass transit, tunnels, boulevards, replacement designs… and at least one person offered the idea of building a canal in place of I-81.”

Through the next several months, until the report is finished, SMTC will keep a “virtual workshop” operating live so people can still go online to participate. Already, more than 100 citizens have visited www.thei81challenge.org/virtual. The SMTC and NYSDOT will also conduct small group meetings upon request. The I-81 Challenge is a joint effort between the SMTC and NYSDOT to plan the future of I-81 in Central New York.