“Most of our children don’t even know what a lunch counter is anymore,” Ifill, the managing editor and moderator of Washington Week, told the crowd at the Carrier Dome.

The world has changed, Ifill said: We have a black president, black CEOs, mayors, and governors. “Some of them lack Negro dialects,” Ifill said to murmured laughter.

The comment was an apparent reference to comments made by Nevada Sen. Harry Reid. Reid said that then-Sen. Barack Obama would have a good chance of being elected because he is “light skinned” and because he has “no Negro dialect.”

Though we’ve made strides, we’re not in a post-racial society, Ifill argued.

Early in her career, a colleague left a note for her with a racial slur. She described a society “that seems so hostile to our efforts.”

“Our children should not expect to be inferior,” Ifill said.

The theme of the event was “Continuing the Journey: Where Do We Go From Here?” This year’s theme builds off of last year’s, which was mostly a celebration of the Obama inauguration. 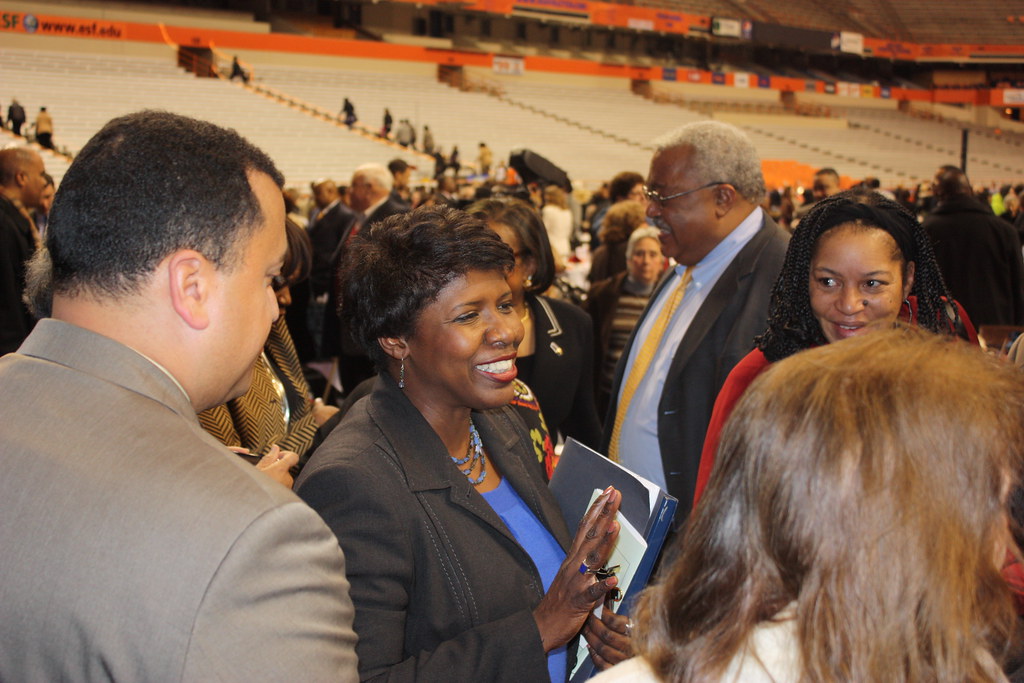 “There’s still a long way to go, and that’s what we want to explore with the theme and her speech,” said Kelly Rodoski, the chair of the celebration committee.

Ifill, who is black, said that she is optimistic about the next generation of black leaders, and said that Obama’s election probably will have a significant effect.

“Black or white, I find that young people are focused on not politics but on social justice, social change, public service, in a way that extends far beyond running for office or getting elected,” she said in an interview before her speech. “I find that more interesting in some ways than someone who’s telling me they’re going to run for office.”

The audience reacted to Ifill’s speech with occasional laughter and cheers, most notably when she said that the university’s event, now in its 25th year, was “the most awesome and overwhelming MLK event I have ever seen anywhere.”

Several audience members said they were in line with Ifill’s opinion and the theme of the night: one election did not solve America’s racial problems.

“You can really take her experience to heart. But it’s not all done,” said SU Chancellor Nancy Cantor in an interview after the speech.

“I thought it was terrific,” Cantor added.

“We have come to the dream somewhat, but not all the way, no,” said Charles Williams, a South Side resident and a tenor in the MLK Community Choir, which performed at the event.

“If he was alive,” Williams added, referring to King, “he would be ecstatic.”

One audience member responded to the theme of the event: Where do we go from here? “To the top,” said Jamie Lodman, a choir member and South Side resident who took occasional breaks between sentences to practice with the rest of her troupe. “Let’s think positive about the future.”

Before the keynote speech, South Side resident Donna Bradford was awarded with the Martin Luther King Jr. Unsung Hero Award for her work in creating a nonprofit dance institute that serves the city’s underprivileged youth.

“I was in awe,” Bradford said in an interview before the event. “I was like, why me? When you work with the kids and in the community, you never look at yourself like that.”