Corcoran High School’s halls hummed on two successive nights last week, as local residents jammed the cafeteria to meet the final two candidates for the job of Syracuse City School Superintendent. The school board may vote as early as Wednesday, March 9, to fill the position from which Dan Lowengard will retire in June. 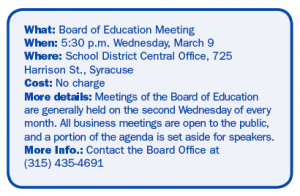 Bernard Taylor Jr., 51, school superintendent in Grand Rapids, Mich., spoke March 1, followed the next evening by Sharon Contreras, 41, chief academic officer in Providence, R.I. In each case, Richard Strong, school board chair, told the Corcoran audiences that each candidate emerged from what he called a long, grueling review process.

“We had over 30 focus groups, telephone and online surveys and a tremendous amount of input that helped us formulate an outline for what an ideal superintendent’s characteristics would be like,” Strong said. “We found a few that were worthy of continuing of the conversation with.” He said the search lasted nearly five months, and that Say Yes to Education and Seattle-based Cascade Consulting helped with the process.

The receptions last week marked a culmination of the intense search that produced two candidates with similarly substantial ambitions, yet differing personalities and approaches. They also provided Taylor and Contreras an opportunity to convey their visions for the district to the very people that will be most affected by their decisions.
From the moment they each stepped behind the podium, Taylor took on more of a preacher-like role, speaking loudly and passionately while Contreras spoke softly, slowly and in a modulated tone.

And although they did so with different methods to communicate with the audience, Taylor and Contreras both said similar things about the audience and the level of commitment that the citizens of Syracuse have given to education.

Contreras nearly echoed those words at the beginning of her speech.

“I want you to know, I am invigorated by the commitment to Syracuse City School District and students, and unwavering commitment is half the battle in education,” Contreras said.

The candidates also mirrored each other in the discussion of their successful turnarounds of low-performing schools, as well as their attraction to the Say Yes to Education program’s interaction with the school district. However, the actual substance of their speeches did not seem to be on the same level. Taylor spent much of his time recalling his own history and applauding those in Syracuse who are dedicated to the educational system, while Contreras used her time to outline structural goals for the district and intercut that with relevant achievements from her past.

That distinction seemed to define the two events on Tuesday and Wednesday, March 1 and 2. On one hand, Taylor was there more to portray himself as someone who can get things done.

On the other hand, Contreras was more interested in portraying herself as someone with a successful structure of ideas but also cares deeply about education.

“I take seriously my moral obligation to defend every child’s right to learn,” Contreras said. “I believe that as a leader, I am responsible for creating the conditions for all students to learn at a high level.” She went on to discuss her three key levers for education, which include quality teachers in every classroom, a guaranteed and viable curriculum and an infrastructure of support for students.

Although audience members acknowledged that the timing of current superintendent Daniel Lowengard’s upcoming retirement could be problematic, partially because of the budgetary and employment issues in schools, they were impressed by both candidates. However, a few parents and district members seemed to join local advocacy group The Alliance Network in endorsing Contreras because of her strategy and experience.

Contreras received almost a full standing ovation from the audience after her speech, while Taylor got the same treatment from two or three people in the crowd.

“I thought they were both really good, but I like her better,” said Ozzie Mocete, a parent of two children who went through the school district. “She seems to have a good plan and a good background to make that plan come across.”

There is a school board meeting Wednesday, March 9, which is the target date to select the next superintendent.