Documenting black history starts with laughter, family and memories from a generation that will always be remembered as an invaluable heart to the city of Syracuse.

With a bus tour that traveled through the old 15th Ward starting at the Dunbar Center on South State Street and ending at Washington Irving Elementary School, The South Side Initiative’s Black Historical Preservation Project revisits all of the places that embody the life, culture and assimilation of the black community to the city of Syracuse. The tour took place from 10 a.m. to 2:30 p.m. Wednesday, Oct. 21.

“The old Dunbar, on Townsend Street, is my favorite memory of the South Side, because it was where I met my future husband,” said Marjorie Carter, the first black female teacher of Syracuse. “This project brings back the landmarks … we get the chance to reminisce on all of the places that are gone.”

The first Dunbar Center, named after Lawrence Dunbar, was “ground-zero” historically to the black community of Syracuse. It was like the YMCA or the Boys and Girls Club today — it was a nursery that offered children health and toys, and a place where teenagers could learn sports, culture and the importance of education. The first Dunbar Center was planned by women who wanted to do something to assist blacks from the south. 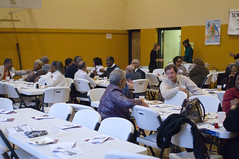 Attendees congregate at the Dunbar Center prior to leaving for the bus tour through the old 15th Ward.

To most, the ‘old’ Dunbar Center was like a second home.

Central High, which was closed in 1975 as Central Tech, was one of the best educated city schools where students had youth programs about alcohol, incredible debate teams, remarkable teaching staffs and historically known sports teams that gave Syracuse icons like Manny Breland, who was the first African-American athlete to receive a scholarship to play basketball at Syracuse University.

It was “extremely satisfactory to see people I grew up with,” Breland said. “To be able to reflect on the places and memories I have throughout my life reminded me that there were a lot of great things I had growing up.”

Central High was the “melting pot” of Syracuse — it was a school of all ethnic backgrounds: Jewish people, African-Americans, Greeks, etc. On top of the fantastic sports and educational programs, Central was one of the few schools to have an amphitheater for students, which held plays, musicals and other big productions. Also, it was separated between boys and girls — students had separate doorways.

Croton Elementary School, now known as Martin Luther King Elementary and located on South State Street, was one of the first predominantly black elementary schools in Syracuse, along with Brighton Elementary. Just down the street from Croton, was the first apartment complex to allow blacks to reside in the building — The Pioneer Homes, 1049 S. State St.

Towards the end of the tour, the bus made a lengthened stop on Cedar Street, where residents joked and smiled about some of the black “after hours” clubs, restaurants and memorable people from the area.

Aunt Edith’s, the first black restaurant in Syracuse, wasn’t as famous as Ben’s Kitchen, but was a place that treated customers like family. The restaurant wouldn’t serve students if they missed school, and the elders watched over the children and helped them if they needed money or anything.

The ‘Onondaga Square Club’ and the ‘Hole in the Wall’ were two late night clubs, that good girls didn’t go to, according to one of the residents on the tour. “Knock Em’ Dead” was a tough guy that you didn’t want to start trouble with, laughed the crowd on the bus. But if you did, you also met his brother “Carry Em’ Out.”

Stories about the South Side add much to the Black Historical Preservation Project.

The Onondaga Historical Association, the South Side Initiative Office, The Dunbar Association, The city of Syracuse’s Office of Multi-Cultural Affairs, South Side residents and local church and political representatives have all joined forces to start the journey towards building a virtual museum of photographs, video and conversation about what the South Side was like starting from the 1940s to present day.

“The Black Historical Preservation Project is to develop a virtual community museum that celebrates the history and heritage for local black people in Syracuse. Projects began in 2008 with a black history exhibit at the Onondaga Historical Association and several community workshops provided by SU faculty,” said Associate Vice President of the SSI Linda Littlejohn.

Gregg Tripole, executive director of the Onondaga Historical Association (OHA), is energetic and excited as a historian to keep this project moving forward. With his efforts and the resources at the OHA, the black community of the South Side will leave so much for future generations.

“The community is so involved with creating a community museum,” Tripole said. “They understand that they are responsible for creating their own history.”