Unsung — But Not for Long

Brenda Muhammad, a Community Correspondent for The Stand, is among those to receive a 2013 Unsung Heroes Award during Syracuse University’s 28th annual Martin Luther King, Jr. Celebration set for Saturday, Jan. 19, in the Carrier Dome.

The evening program’s award presentations and entertainment begins at 5:30 p.m. This event is free and open to the public. However, for those who wish to attend the 4 p.m. dinner, which precedes the program, a $25 ticket purchase is necessary. For ticket information, call Hendricks Chapel at 443-5044.

According to the SU Hendricks Chapel website, the Unsung Heroes Award Committee selects members from “the greater Syracuse community who exemplify the spirit, life and teachings of Martin Luther King Jr., but who are not widely recognized for their efforts.” This year, awards will be presented to:  Brenda Muhammad, Jo Van Collins, Adena Rochelson and Engineers Without Borders. 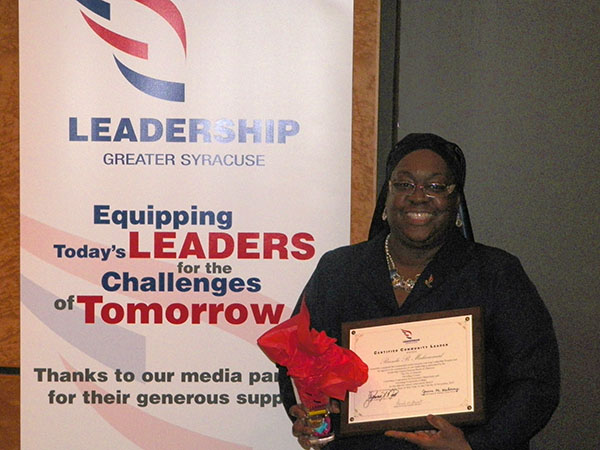 Muhammad embodies the spirit of giving.  She has served two terms as an AmeriCorps VISTA (Volunteers in Service to America), and she also gives her time to the following organizations: Syracuse Habitat for Humanity, the Red Cross, Black Emergency Managers Association, the International League of Muslim Women, Black Syracuse Project and Focusing Our Resources for Community Enlightenment (FORCE).

She is also enrolled in graduate programs at SU and Empire State College. Muhammad is a member of The Leadership Classroom and is a 2012 graduate of CNY Political Leadership Institute and Leadership Greater Syracuse.

Muhammad was nominated by Linda (Tunurah) Barbour, President of the Syracuse Chapter of the International League of Muslim Women. Barbour has often been recruited by Muhammad to volunteer with her at various organizations. According to Barbour, Muhammad was instrumental in raising $30,000 as project coordinator for the Syracuse Habitat for Humanity Women Build. She has hosted Community Conversations and co-hosted a Community Read-Out event at Beauchamp Library during 2012 Banned Books Week.

“Brenda should be named an Unsung Hero because of all the volunteer work that she does,” Barbour said. “She is a kind, caring individual and a joy to be around.”

Thanks to Barbour, Muhammad will soon be an Unsung Hero and as for being unsung — not for long!

— Announcement contributed by Keith Muhammad, Community Correspondent for The Stand