March is set aside as Women’s History Month to show appreciation, love, respect and honor for women and their achievements in areas such as arts, culture, business and politics. Its roots can be traced to the early 1900s when women stood up in solidarity to create a day in which to promote their quest for equal rights. 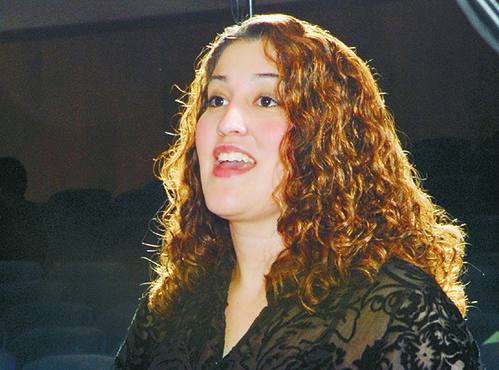 Teacher Andrea Armbruster inspires in the classroom and helps students with practical needs, too. | Photo provided

In recognition of Women’s History Month, I asked my daughter, Maricia Seigler, 23, to select and write about three women for this month’s A Friendly Five column. “Missy Danielle,” as she prefers to be called professionally, earned a bachelor’s in vocal performance from Syracuse University and a master’s in jazz studies from the University of the Arts in Philadelphia.

She has performed at the famed Philadelphia International Records and most recently was selected to be a member of the Praise and Worship Group for national gospel recording artist Tye Tribbet. She lives in Philadelphia, but she is very much connected to the Syracuse community, having been born, raised, educated and inspired here.

In keeping with the spirit of this column, I asked that her choices be women who are local, musically inclined and have been an inspiration for others who are exploring their own musical talents.

During celebratory seasons like Black History Month and Women’s History Month, many focus their attention on well-known figures. Services are held in their honor, monuments are built, books are published and lessons are taught with hopes that students will be inspired to higher achievement. While those legacies are important to remember, few take the time to recognize the (s)heroes they encounter on a daily basis — the teachers, ministers, parents and others who dedicate their lives to the uplifting of other people.

There are countless unsung (s)heroes in Syracuse, but for me three come immediately to mind. They are: Donna Alford, lead singer of the Soft Spoken Band; Andrea Armbruster, former music teacher at Nottingham High School; and Twiggy Eure, co-pastor of The Prom- ise Land Church in East Syracuse. These women were instrumental in my own musical development and have given freely of their time and talents.

For nearly 25 years, Donna Alford has spent the majority of her weekends sharing her voice with audiences across New York state, the surrounding states and the Bahamas. Her heartfelt performances have inspired other singers and musicians and touched the hearts of many listeners.

“I didn’t figure out that I was making an impact until later in life,” she said. “I began to realize after a woman came up to me crying and thanking me for my performance. I was floored. I had no idea that I was making that kind of impact on people’s lives.”

Alford has breathed life into the Syracuse music scene through her performances in countless ways. However, the way that was most inspiring to me was my being able to grow up in her home listening to her sing and receiving her tutelage. You see, Donna is my mother.

Like many teachers, Andrea Armbruster has devoted her career to helping students develop tools that will last a lifetime.

“That could mean teaching students to read music, working with other people or learning things in a different way,” she said. “We want to build the necessary skills so that they can make things happen for themselves in the future.”

For Armbruster that means meeting practical needs first, such as ensuring rides to and from school to maintain steady attendance, providing meals during late rehearsals, staying after hours to teach lessons, transporting students to auditions and concerts in other cities, and setting up private lessons.

“I simply want students to leave my class having gained some knowledge or experience that they couldn’t get somewhere else,” she said. “Something uniquely ascribed to the music room.”

Clearly her extra efforts were successful. Within six years at Nottingham High School, she helped at least a dozen students get into collegiate music programs. A number of others have entered into nonmusic programs. Many of her students have credited Armbruster for their success.

Eveny Parker is one of them. “Ms. A. was the first person to have me consider my character and not my talent,” Parker said. “She allowed me the space to be a leader and helped me with recommendations and scholarships. She gave rides, made sure I was set on a practical level and then an educational level.”

A love of music and a passion to help others succeed are the traits that define Pastor Twiggy Eure.

Pastor Twiggy is a member of numerous organizations that are geared toward serving people, including Delta Sigma Theta Sorority Incorporated, The Promise Land Church and Women of Promise. She also owns her own consulting company, Virtuous Business Solutions. She is the proud mom of four children and the wife of Pastor Erik Eure.

She explains how she manages it all. “I think what drives it is my passion to see other people reach their destiny, being all that they can be. I think that the opportunity to give back what God has freely given me is part of the call on our lives as people.”

Through her ministry work at The Promise Land Church, Pastor Twiggy has inspired countless young women to arise and live victorious lives. She has organized numerous conferences, retreats and seminars — all geared toward empowering women within the Syracuse community.

Pastor Twiggy is also a phenomenal singer and worship leader. Nearly 10 years ago, she started a small music ministry at The Promise Land Church. Through that ministry, she created space for young musicians to develop musically and spiritually.

Some of the world’s greatest (s)heroes will never make it into the history books: Claudette Colvin, the first to resist giving up her seat on a public bus during the civil rights movement; Sarah Elizabeth Ann Griscom, the seamstress who gave Betsy Ross sewing lessons; or Gustavo Dudamel, who revived the Los Angeles Philharmonic and helped to give students the opportunity to make music. However, they are key components in the history of our nation and deserve recognition.

The same is true for people like Donna, Andrea and Twiggy. Their presence and service within the Syracuse community makes a tremendous difference in the lives of residents. It’s important that they be recognized and commended for their hard work.

Have a Friendly Five suggestion? Contact Reggie at reggie@softspokenband.com or (315) 479-9620.