In a sign that South Siders are embracing the idea of good health, exercise and nutritious eating, about 75 people turned out in Kirk Park recently for the neighborhood’s annual fitness walk. 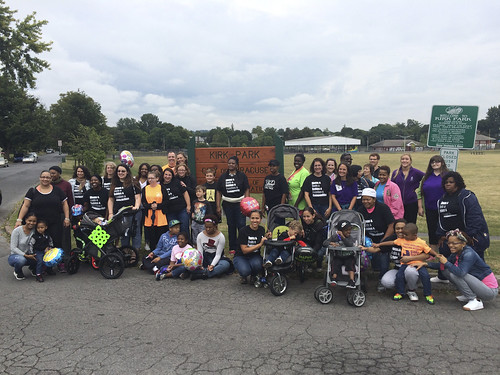 Participants pose for a picture at the end of the fitness walk. The walk lasted about 37 minutes.

Syracuse Healthy Start, a program run by the Onondaga County Health Department to promote healthy pregnancies, launched Syracuse Stroll five years ago. Since then, the walk and health fair have evolved into a local tradition — although one that organizers say has plenty of room to grow.

“My favorite part is seeing the babies,” said Selina Lazarus, Healthy Start’s consortium coordinator. “The moms coming out with their babies — the babies who have reached their first birthdays and the new moms coming out to join us.”

Part of the event’s mission is to increase awareness of infant mortality rates.

For every 1,000 babies born in the U.S., six die during their first year, according to the Centers for Disease Control and Prevention. In Syracuse, African-American infants die at a rate of 12.4 per 1,000 live births compared to 5.8 white babies per 1,000, according to an Onondaga County Health Department press release.

“It’s raising awareness,” said Onondaga County Health Commissioner Dr. Indu Gupta. “In this day and
age, in the United States of America, we shouldn’t be talking about that. There is something at the social level.

What kind of support systems can we provide?”

The health fair, held Sept. 12, started at 10:30 a.m. on the covered basketball courts in the park. A yoga demonstration began, and participants decorated their strollers with balloons and streamers.

Most people in attendance wore black T-shirts that said “Moms & Dads & Babies & Families & Communities” on the front and “We’re all in this together” on the back.

Nine educational tables were set up in the area, representing groups such as: the Onondaga Health
Department: REACH CNY, which stands for Resources, Education, Advocacy and Collaboration for Health Central New York; and Children’s Consortium.

At 11:20 a.m., participants began the roughly 1.4-mile walk around Kirk Park, which lasted about
37 minutes. Chants of “when I say Syracuse, you say stroll” and “when I say healthy, you say start” constantly erupted as the group walked down the road, escorted by two Syracuse Police Department cars.
Passers-by beeped their car horns, and people in their homes came outside to see what was happening.

“I think it’s amazing,” Syracuse resident Tamar Smithers said. “I can’t wait to see it grow in years.” Smithers’ favorite part was “the sense of community.Seeing people speak to people who were in houses and looking.”

When the walk ended, participants returned to the basketball courts to the sound of “We Are the Champions” by Queen playing. 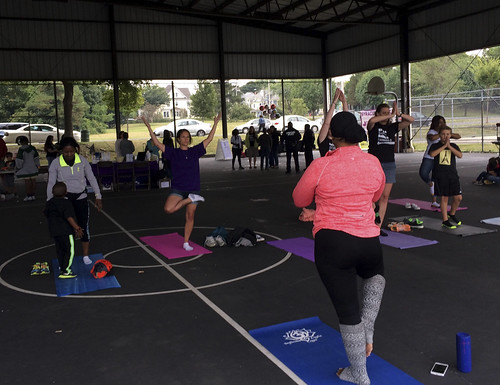 The fifth annual Syracuse Stroll in Kirk Park started with a yoga demonstration.

The walk was followed by lunch and a mental and physical fitness group activity led by H2Fitness. Participants formed a large circle to complete group challenges. H2Fitness has been involved for the past three years.

Since the Syracuse Stroll began in 2010, more activities have been added. Yoga made its debut this year. The trails around Kirk Park have been improved, making the walk safer.

But the Syracuse Stroll struggles to attract the number of people that coordinators would like, said REACH CNY executive director Liz Crockett.

Syracuse Healthy Start’s Lazarus said the organization is considering moving the event to earlier in the summer because while September is Infant Mortality Awareness Month, there’s often poor weather.
Crockett added that the Syracuse Stroll could be combined with a Syracuse Department of Parks and Recreation summer festival in Kirk Park during July or August.

“We just would like 100 more families here and we do struggle to do that,” she said.