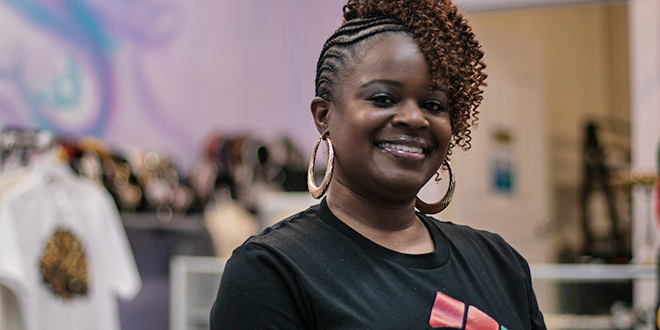 By Kate Minutillo and Gianna Prudente

Black-owned businesses were disproportionately affected by the COVID-19 pandemic, according to the National Bureau of Economic Research, which reported that by mid-April, business dropped by 40%.

For restaurant owner Phyllis Moore of Joe’s to Go, located a few blocks west of downtown Syracuse, her business was cut in half.

“Fortunately, we did not have to close,” she said, noting the primarily takeout shop was already understaffed. “Had we been fully staffed, we would have had to lay off.”

In a local intake survey conducted by the Upstate Minority Economic Alliance (UMEA), 85% of respondents said their businesses were affected by the pandemic.

Even before the pandemic, Black-owned businesses were suffering a lack of access to capital as a result of inherent biases, said Me’Shae Brooks-Rolling, executive director of the UMEA.

“The concept of inherent bias is trying to make all business owners fit into one cookie cutter when you’re looking to disperse capital and making assumptions about those businesses,” she said. “It just creates all types of barriers.”

The pandemic compounded issues for many Black business owners who did not have a relationship with banks prior to the pandemic, Brooks-Rolling said. This made it even more difficult for them to access stimulus payments or Paycheck Protection Program funds.

Of 70% of business owners who applied for assistance during the pandemic, 53.8% received assistance, 38.5% did not and 3.8% did not hear back, according to UMEA’s survey.

“I received money one time, and it was so small because I didn’t have the taxes that showed I was in business because I just opened in January,” said Tiara Love, owner of Experience the Love on South Salina Street. “A lot of the things that were being offered were phenomenal. I just wasn’t able to take advantage of it.”

Love was forced to close her shoe boutique in March of 2020, followed by a three-month shut down during the pandemic.

“I wouldn’t have anticipated two months into this business venture that I would be closed for three months,” said Love, who didn’t open again until June. “I am resilient enough to believe that all these businesses will bounce back or they’ll be very prosperous moving forward.”

The pandemic’s especially hard impact on Black-owned businesses has caused a push nationwide, and here locally, for consumers to show support.

El-Java Abdul-Qadir, director of the South Side Innovation Center, said the effects of the pandemic, like joblessness, and health risks, brought attention to socio-economic inequalities and forced people to be more conscious of how they spend their dollars.

“People have started to educate themselves around unconscious bias and discrimination. Because of that, people have been empowered to make decisions about where they’re spending their money and how they’re supporting businesses owned by people of color,” said Abdul-Qadir, also a Social Science Ph.D. student at Syracuse University studying urban entrepreneurship and economic development.

In recognition of these inequalities, many private companies and industries went on to make commitments to Black-owned businesses as well as consumers.

Following the resurgence of the Black Lives Matter movement this summer, Brooks-Rolling said she received a number of calls from patrons looking for businesses of color they could support.

“I think that was a very pivotal moment,” she said. “It was a good start, but we’re interested in a paradigm shift that motivates or encourages non-minority consumers to support minority businesses on a regular basis.”

Karen Loftin, a Syracuse resident, said it’s important for consumers to be conscious of where their money goes.

“That awareness amongst people makes healthier communities, healthier families, healthier business conscious, economic power,” she said. “It brings a lot of culture to the community as well. It allows people to socialize better because they’re not struggling economically.”

Loftin said because communities need to be able to rely on themselves, she advocates for others to support Black-owned businesses.

“I push it for the same reason that I hope every other Black person pushes it,” she said. “I think it’s a product of the long struggle that our people had to go through, and I think it’s important to always remind ourselves that we’re always going to need each other in the community.”

As a way to boost community support, Indaria Jones, founder and CEO of The Creators Lounge located on Syracuse’s South Side, pioneered Buy Black Saturdays, a local initiative where Black vendors sell their products at pop-up shops located curbside on South Salina Street. Vendors pay no fees and marketing is funded and produced by the lounge.

“It’s just been really great, because it brings back the community part to the South Side,” Jones said.

The lounge is also working to overcome the challenge of buying Black through Black Syracuse, a social directory highlighting Black-owned businesses, events, housing, and food. As another means to directly benefit businesses in the community, The Creators Lounge received $11,000 from the Black Equity and Excellence grant through the Central New York Community Foundation. The fund itself was created this past summer and supports community projects that will help encourage self-sufficiency and improve economic conditions within the Black community.

Initiatives through The Creators Lounge are just one way Black business owners have seen support.

As a local business owner, Moore said she thinks local initiatives have encouraged the community to support Black-owned businesses and that she is “very grateful” for the support she’s received.

“The county executive would have his staff call in orders, and we would take them and drop them off. They did that a couple times,” she said. “We also had some Black fraternities and sororities come and support.”

Love said she hopes to see more support of small and Black-owned businesses from the Syracuse community even after the pandemic.

“The Syracuse community in general needs to support Black businesses, small businesses, period. That is not even a question,” Love said. “It’s just something that needs to be a way of life.”