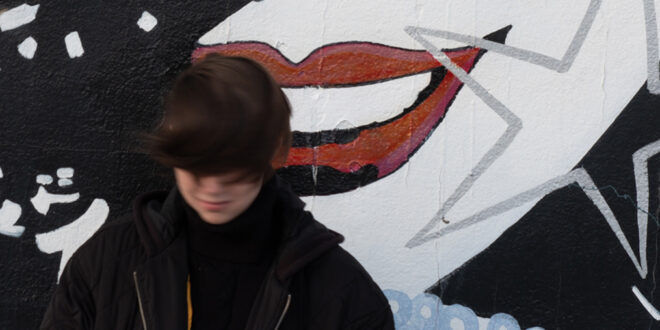 Syracuse teen Evan Kulczynski says growing up nonbinary can be challenging. “A lot of people know that it can create confusion,” he said. “I wish people would ask.” | Em Burris, Staff Photographer

High schoolers share challenges to being acknowledged as trans or nonbinary Evan Kulczynski usually stays quiet when another student calls him by the wrong pronouns.

“I don’t like correcting them and potentially leading to something, like someone saying ‘No you sound like a girl, so you are a girl. I’m going to call you she/her,’” said Kulczynski, a senior at the Institute of Technology at Syracuse Central (ITC).

Kulczynski, 17, realized he was nonbinary four years ago and said luckily his school was accepting — including with changing his former name in the school’s system.

Now he feels more comfortable looking at his grades and school ID, which are no longer painful reminders of the disconnect he felt with his female identity.

ITC social worker Melissa Mendez, who works with about 580 students, helps notify teachers about changes in students’ preferred names and pronouns. “If you’re one of the only students who is using a one-person bathroom, not changing for gym or teachers are constantly getting your pronouns wrong, it can be very isolating to be trans or nonbinary,” Mendez said.

Gender role conflict is defined as the devaluation, restriction or violation of oneself or another person when trying to adhere to rigid gender role expectations, according to Dr. Daniel Miller, a mental health counselor at Dr. Spiegelhoff & Associates in Camillus. Devaluation can be internal — restricting oneself because of societal standards — or external when someone demeans someone else who embraces their gender expression.

“Oftentimes, the early 20s is when we start to figure out a little bit more about who we are,” Miller said. “What I’ve noticed is, with my adolescent clients, they’re much more aware and willing to talk about the gender spectrum and embracing nonbinary and androgynous forms of gender expression and identity.”

A student’s home life can also affect struggles with gender identity — something that Jeffrey Newell, a media communications teacher at ITC, has witnessed.

Newell, who received mandatory district-wide training on LGBT issues, said that he tries to be attentive to language in parent meetings, avoiding gender-specific pronouns because he knows some parents are not accepting of their child’s transition.

Jasper Cotroneo, 16, a student in Newell’s media class began transitioning two years ago during the pandemic. In December, Cotroneo drew a comic on being misgendered.

Little to none of Cotroneo’s school friends are transgender, meaning they don’t face similar obstacles. “It feels kind of lonely,” Cotroneo said.

“Over quarantine, I was able to surround myself with people that were more like me, especially over the internet,” Cotroneo said. “It really opened my eyes; like, I don’t really need to hide myself. If somebody doesn’t accept me for me, then that’s their problem, I guess.”