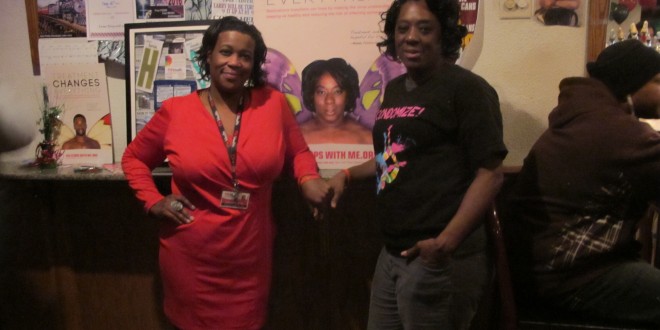 In a new effort to show blacks in Syracuse how to avoid exposing themselves to the dangers of HIV and AIDS, some nonprofit health organizations decided to offer their message as part of an evening of free food and dancing in a South Side bar recently.

“We don’t have a huge following, flooding into HIV awareness events,” said Lanika Mabrey, representing Access Care and Resources Health, one of the participating groups. “However, we do have individuals who are interested in having a good time and partying. We want to meet individuals in that space and match information or resources that they need for HIV awareness.”

The event, “Black Love Matters,” was held Feb. 5 at the B&B Cocktail Lounge at 310 South Ave., and drew a crowd of about 35 people. Attendees munched on a wide selection of foods and then moved to the dance floor.

Despite the festive atmosphere, Mabrey made no effort to play down the seriousness of the challenge facing blacks in containing and eventually defeating the virus. African-Americans accounted for nearly half the new diagnoses of HIV/AIDS in 2014 in America, she said. This statistic is far higher than their share of the population, which is 12 percent, according to the Centers for Disease Control and Prevention.

New York state also has more blacks living with HIV/ AIDS than any other state in the country, Mabrey said. The ACR Health website puts that number at 34,850.

“The goal of this meeting is to introduce the black community to the resources that are solid and available to them so that they are protecting themselves and we end AIDS in our state by 2020,” Mabrey said.

She said she was asked to lead the project after suggesting several creative ideas for how to hold and conduct this event. Mabrey had the assistance of collaborating partners in the FACES program, National Black Leadership Commission on AIDS, HIV Stops With Me and SUNY Upstate University Hospital.

After years of feeling like they have been mistreated by the medical system, many blacks in the communities do not trust the medical system to assist them with the prevention or treatment of HIV/AIDS, Mabrey said. 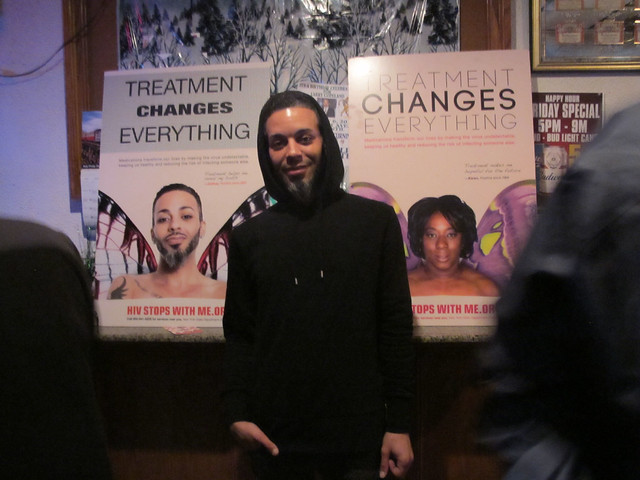 Joshua King, who is HIV positive, poses next to a poster of his face, at left, and Karen Loftin’s face, who also has HIV. The posters urge African-Americans to seek treatment for this preventable disease.

“We are talking about a group of people who historically have not had a good experience in the medical system,” Mabrey said. “And now we know the main line of defense with dealing with this virus is, of course, health insurance, meds, you know talking to your doctor. These are challenges for community of color. That’s one of the barriers.”

Mabrey addressed this issue of awareness with help from others in the community who spoke at the event.

Jennings also discussed a fairly new medicine called PrEP, which stands for pre-exposure prophylaxis. When a person takes the medication daily, it will decrease the chances of that person getting the virus, Jennings said.

“This is groundbreaking,” Jennings said. “This has the potential to change the game as far as HIV prevention goes.”

Other speakers included two local people who have lived with the virus for years.

One of the speakers was Karen Loftin, a native of Syracuse who has had the virus for more than 22 years.

Loftin spoke of how she ignored relevant information and now must live with the virus.

“I am a product of this community,” Loftin said. “I am a product of when you don’t take knowledge that is given to you and apply it to your life because you think it doesn’t apply to you. The information about HIV was out there. I was getting high; I was running the streets. South Avenue is my block. I put bricks in this city right here. This my neighborhood.”

Loftin also said blacks often have been associated with negative attributes, such as violence and drugs, and she stressed to the crowd that it was time for change.

“We don’t just have to accept the things that are given to us,” Loftin said. “Our race is at the top of everything negative: murders, HIV, heart disease.”

Joshua King also spoke to the crowd about his struggles with the virus. King has had the virus for about 15 years. King believes the community needs to unite and band together to fight the virus.