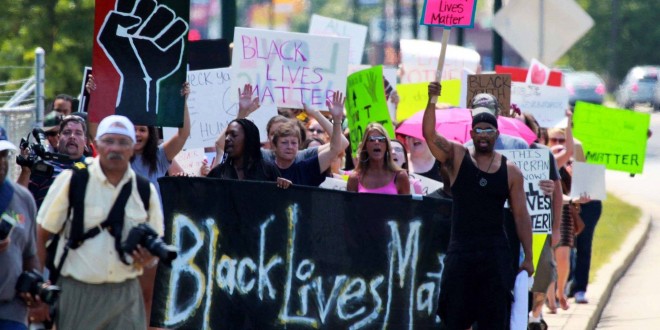 The political activism of the ’60s and the pop culture of new millennium came together in Syracuse at the 33rd Annual Martin Luther King Jr. Memorial Public Affairs Lecture held March 3.

Grammy-Award-winning black singers Beyonce, Janelle Monae and Kendrick Lamar represented the new millennium; Assata Shakur and Fred Hampton, both community organizers for the Black Panther Party, represented the ’60s. Expert blender of the two distinct eras was Treva Lindsey, an Ohio coordinator for the social media hashtags Black Lives Matter and Say Her Name. Lindsey is also a professor at Ohio State University, where she specializes in black feminist theory, popular culture studies and sexual politics, among other topics.

“Former members of the Black Panther Party are now respected elders in the black community in a number of cities,” she said. “They are currently providing the mentoring for the young activists with Black Lives Matter.”

Lindsey delivered this year’s traditional lecture in front of a crowd of about 30 people in the Graham Scholarly Commons. The event was put together by Syracuse University’s Department of African-American Studies.

During her speech, titled “Who Will #SayHerName?: Herstoricizing Contemporary African-American Freedom Struggles,” Lindsey was critical of a prevailing current in the Black Lives Matter movement.

“There is a tendency in Black Lives Matter, linked to racial patriarchy, that doesn’t make black women visible,” she told the audience. “Black Lives Matter should not be only Black Males Matter.”

In order to counter this tendency of “regular erasure of black women in the dominant narratives of racial justice,” the speaker recommended: first, questioning ourselves who is included, who sits at the table, and, then, having conversations where everyone has to be comfortable.

“Radical activists shouldn’t have a singular focus on black men and boys,” she added. “Gender and sexuality affect how we see. We need an inclusive approach.”

Lindsey suggested that the black movement has moved backward in some respects since the ’60s. “Women were the majority in the rank and file of the Black Panther Party. Black women were the vanguard,” she went on to say. “A way out of this backslide of the racial justice movement would be to use social media, including blogs such as Tumblr, to create herstory for black women, to create their own images.”

Linda Carty asked whether or not intersectionality of race, class, gender, sexual orientation, age, etc. would be a useful category to frame the challenges that African-American females face nowadays. Lindsey replied that this segment of the population needs accomplices, allies, to help overcome the notion of masculinity as a confining thing and show how patriarchy makes lives worse.

Herbert Ruffin inquired about the use in Cleveland of the song “Alright” by Lamar, a rapper straight out of Compton, Calif., which Ruffin said has become the anthem of Black Lives Matter.

Lindsey answered that the line “We gonna be alright” in this tune is connected to “blackity-black blackness, a blackness that is more expansive and inclusive.”

Lindsey added: “Black Lives Matter has reappropriated Kendrick Lamar’s song and expanded its lyrics to ‘We gonna be alright if we hold each other’s hands.’ This movement has also reappropriated Panthers Assata Shakur and Fred Hampton’s political messages and made them musical.”

In response to a question by James Gordon Williams, Lindsey praised Monae’s song “Hell You Talmbout,” calling its narrative “overwhelming.”

In regard to Beyonce’s song “Flawless,” which includes a segment of samples titled “We Should All Be Feminists,” Lindsey said that Beyonce wants to sell records and be successful.

“Beyonce is working on her femininity. She is working on moving the needle toward feminism,” Lindsey added, “She is growing due to constant conversations with her audiences in an ebb and flow. She is now one of the biggest providers of bail funds for Black Lives Matter activists.”

Lindsey concluded by trying to dispel a common perception of the civil rights movement, led by Dr. Martin Luther King and others. “Only 12 percent of the black population participated in direct action at the height of the civil rights movement. It was not the majority,” she said. “Not everybody is a leader. Now we need a leader bug to bite people and turn them into leaders.”