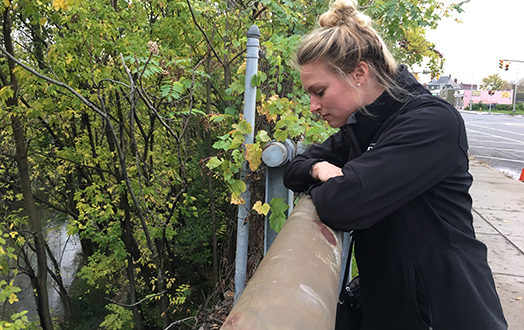 Kate Waltman stands on the bridge near the intersection of South Clinton Street and West Onondaga Street, looking down at where she and Timmy Turner would sometimes meet.

It’s a cloudy Saturday afternoon as Kate Waltman crosses the intersection of South Clinton and West Onondaga streets. She walks under the overpass where the “Lives Change Here” sign is painted and stops at a bridge. Looking down, she points to a spot below. “That’s where Timmy and I would sometimes meet.”

Timothy “Timmy” Turner was a homeless man whom Waltman met a few years ago during a Pedal to Possibilities bike ride. “I remember pulling up next to him,” she said. “He had these stunning blue eyes, and he looked over at me on the bike and said, ‘Hey lady!’”

Waltman says she was a bit nervous about riding with the homeless people, but Turner was the first person who made her feel special about being there.

Every Monday, Wednesday and Friday when Waltman walked into the Brady Faith Center, Turner was sitting there, saving her a seat with a magazine in hand and a cup of coffee poured. She felt like she had made a friend who was from a completely different world. 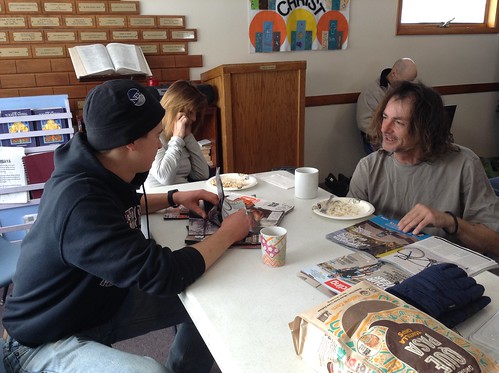 “I was amazed at how much I looked forward to spending time talking to Timmy and how happy it made me,” she said. “And how important I felt my relationship with him was in his life.”

On any given day, there are more than 800 homeless people like Turner living in Onondaga and Oswego counties, according to the Housing & Homeless Coalition of Central New York, and before getting involved with Pedal to Possibilities, Waltman had very little contact with them. But the bicycling program became the bridge for a special relationship and laid the foundation for her passion for helping the homeless, ultimately leading her to start her own nonprofit.

Waltman started to have conversations with Turner about ways she could help him work his way out of issues he had found himself in due to homelessness and drugs.

“We had a couple of really nice sit-down meetings at Café Kubal about some ways that I could find Timmy a job or that we could start a program together that would get Timmy and some other folks in similar situations on their feet working,” she said.

Then one day Waltman read an article in the paper about a body found in the creek not far from where she and Turner did a lot of their bike rides. It took authorities about a week, but they were able to identify the body. It was Turner, who drowned May 9, 2015.

Waltman had not openly wept over the death of someone since the passing of her father around five years ago, but she still holds a vivid memory of sitting down and crying for an hour. She felt like she had failed Turner. And with tears starting to run down her face, Waltman said, “I never really got to express to him how much he had changed me, and so I just put my foot down and said, ‘That’s not going to happen again with anyone else that I know here.’”

It took a few months, but she was motivated to start a program for the homeless and those in poverty.

“One of her greatest strengths besides being an incredibly thoughtful person is her ability to listen and act upon what she hears,” said Andrew Lunetta, founder of Pedal to Possibilities. And act she did.

Waltman started Step Up Moment in January 2016, which brings fitness and healthy lifestyles to the poorest communities in Syracuse. It offers free fitness classes every Wednesday at the Rescue Mission chapel.

On Wednesday nights, classes are on the small side with 12 participants. That compares with 30 participants Waltman averaged during the summer months when she had a $50 healthy groceries initiative in place.

For every five sessions that participants attended, they earned a $50 gift certificate to Nojaim Brothers Supermarket to buy healthy groceries.

The unexpected growth of the program led to a shortfall in funding, which had initially been funded through a GoFundMe campaign. 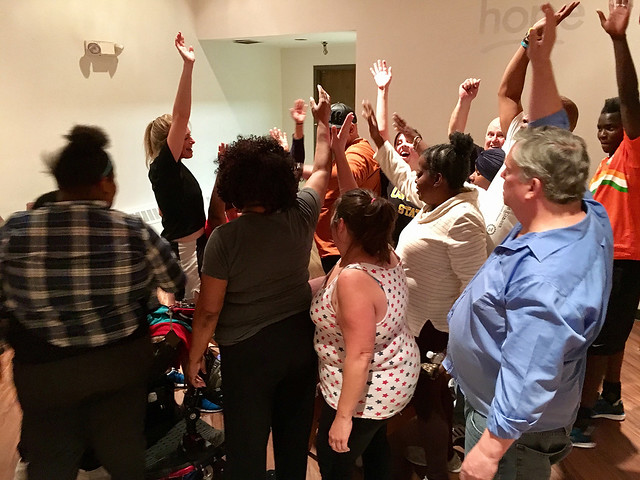 At the end of a Step Up Moment class, participants celebrate their hard work with Kate Waltman. | David Onoue, Staff Photo

“In July the most I gave out in a week was $450, and at that point, we were giving out too much per week to sustain my personal ability to reach out and get more money,” Waltman said.

While Waltman no longer offers the healthy groceries initiative, participants still show up Wednesday nights, an encouraging sign for her.

As a few participants who were late made their way into the Rescue Mission chapel this fall, Waltman enthusiastically called out their names from the stage. She acknowledged them, then ran down and gave each one a huge hug. For many of them, that acknowledgment and genuine care had helped them through their hardships.

In less than a year, Waltman has been able to affect the lives of many individuals through Step Up Moment, including Andres Henriquez.

Geri Corradino, a co-worker at the Central New York Community Foundation and volunteer at Step Up Moment, recalled when Waltman first met Henriquez. Waltman was driving down the road in downtown Syracuse when she saw a man on crutches with one leg, struggling along. She pulled over immediately and asked him if he wanted a ride somewhere.

Corradino asked Waltman if she was afraid to welcome a stranger into her car. And Waltman replied, “No. It looked like he needed help and it was really cold.”

Waltman then took Henriquez out for a cup of coffee. She learned about his life and that he came to Syracuse from Cuba to get fitted for a prosthetic. She invited him to attend Step Up Moment classes, where he met another volunteer, Patrick Smalanskas, who eventually helped him find employment in Massachusetts. Smalanskas’ family is from there. “She didn’t think about anything but just helping this guy with one leg on the street and he’s homeless,” Corradino said.

Waltman and Corradino first met when Waltman became the 2015-2016 Moynihan Accounting Fellow at the foundation, and the two were cubicle mates. Corradino remembers the moment.

Corradino eventually became a volunteer with Step Up Moment, and she considers Waltman to be one of her best friends. “I just love her so much,” she said.

Another believer in Waltman is Jerry Lieber. Lieber is a resident of Crossroads, an affordable permanent housing option on the Rescue Mission campus; he started attending Step Up Moment classes when his primary-care physician told him he needed to exercise.

Since attending the workout sessions, Lieber has been taken off one of his medications for diabetes, and Waltman has seen him come out of his shell, talking and interacting with all the participants.
“I’d be a different person if it weren’t for Kate,” Lieber said. “She’s a kind human being who changes your life when you meet her and talk to her.”

While Waltman may appear happy, she is trying to balance two worlds. Her father wanted her to become a certified public accountant (CPA), and she promised him that she would. They both realized he wouldn’t be alive to see that day.

Lunetta believes Waltman will need to have a heart-to-heart conversation with herself about what she wants to do. “I personally think that she is going to have to decide if she wants to dedicate 100 percent of her time to this, or if getting a job at a prestigious accounting firm is what she wants to do,” he said.

For the time being, Waltman has her heart set on bridging these two communities. “I get so excited by the idea that because I am part of those two worlds, I might be able to be a bridge and help other people,” she said.

A bridge just like the one she crossed with Timmy.