Since being released from the Cayuga Correctional Facility in 2015, Syracuse South Sider Rashawn Sullivan has emerged as a powerful role model to both the youth and the adults of his community.

“Street life is addicting,” Sullivan said, in a recent interview. “I’m now someone who goes into the streets and talks to individuals on the corners about the addictive behavior and how it can blind them from the consequences of being in the streets.” 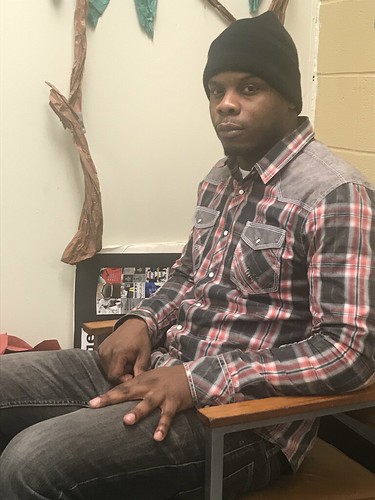 Rashawn Sullivan spent 17 years at correctional facilities, and he has used his past as a learning experience for members of his community.

Sullivan fell victim to that street life in 1997 when he killed Jason Crawford in a drive-by shooting. He spent 17 years at various correctional facilities, but now, he’s making efforts to ensure that teens and young adults in the Syracuse area don’t fall into that same trap.

This spring, Syracuse University provided space at Peck Hall on East Genesee Street for Sullivan to run workshops where people could hear his story firsthand. Local youth, relatives of victims of violence and some of Sullivan’s former inmates attended and listened to him talk about apologizing and forgiveness, while also providing a bridge for professional help.

“Our therapy services are open to anybody, anytime,” said Tracey Reichert Schimpf, the director of clinical services at SU who has been working with Sullivan for about a year.

According to Schimpf, the workshops provide members of the community an opportunity to seek help. If an individual attends one of his workshops and decides that therapy might be helpful, Sullivan is able to connect them with Schimpf and SU’s services.

“He’s been there. His story is real. He gets the pressure,” Schimpf said. “I’m a therapist and I’m associated with academia. Kids aren’t going to listen to me in the same way.”

“He can actually talk to students about what it’s like to be behind bars,” Zoida said. “Not many people are able to do that, and I think it’s good for students who think they’re indestructible because this sort of thing could happen to them.”

Zoida said that anything a police officer, teacher or therapist like Schimpf could say to teens and young adults isn’t going to ring true the way it would coming from Sullivan, someone who has actually lived that reality.

When he was released, Sullivan said his initial plan was to just apologize to the Crawford family. From there, he started his “iApologize” campaign, which encompasses all of his different efforts in the community. He’s written a book, “iApologize,” and he’s working on a second one that will focus on his transformation from behind bars to community activist. He has started visiting local correctional facilities, including a few where he was once incarcerated, to give presentations to the inmates to inspire them to use the time behind bars wisely.

“You can learn from your poor decision while also getting college-like programs under your belt, and then bring that information into society and then apply it, because it works,” Sullivan said. “I’m just a living testimony that it can be done if you take the proper steps.”

This summer, Sullivan will work on two major projects. First, he wants to replace littered liquor bottles at memorial sites for victims of violence with newly planted trees.

“I noticed that through the city of Syracuse, people weren’t really honoring the dead. And it was reflected through the memorial sites,” Sullivan said. Liquor bottles carry a negative connotation because of what alcohol can do to your health and community, and Sullivan said he wants to replace them with young trees, which are symbolic of growth and new life.

“The victim’s family would actually participate in the process of planting the trees and putting whatever other positive object that they want to put down there, whether it’s a teddy bear or flowers, candles, balloons,” Sullivan said. “Anything that represents positivity and life.”

Sullivan has been working in conjunction with the Onondaga Earth Corps to clean up existing memorial sites, to find empty plots of land for new ones, and also to provide the trees.

For his second summer project, Sullivan intends to revamp his iApologize beautification project. Each Saturday, Sullivan, with the help of local community members, will pick an area of town to spruce up and pick up litter.

“It’s all about beautifying the community and when that happens, people tend to have more respect for it,” Sullivan said. “I started doing it two years ago, but other things came up and I kind of had to push with those other ideas. But it’s definitely something that I’m going to get back to this summer.”

Even Sullivan says that he’s blown away by the chances he has had in just three years out of prison to improve his community and make a difference.

“I didn’t think that it would start to expand like this, or these different types of opportunities would come along this fast,” Sullivan said. “Initially I just wanted to clear the air with the Crawford family, but then other things just kept coming from it.”

— Article and photos by Jack Henkels, The Stand Staff reporter