Ministry worker: “We won’t turn our eyes or hearts away from them”

Over the past five years, St. James Roman Catholic Church, on the South Side’s southernmost edge, has developed a special relationship with Syracuse’s homeless population. The church works with other organizations — including such South Side institutions as the Oxford Street Inn — to provide food and basic care to men and women living outdoors.

The parish, 4845 S. Salina St., also provides sandwiches, foot care and haircuts to the Oxford Street Inn, which is a shelter for men at 201 Oxford St. Sheila Austin, Emmaus Ministry coordinator, fills her black Subaru Outback with hot soup, coffee and baked goods, and she travels with a group of other parishioners around to different spots where homeless people congregate on a regular basis.

“We try to be prepared with coats or blankets if people need them because what I have found is if they’re in need, they need the supplies now and not in three more hours,” Austin said.

Austin said she knows she can’t fix the homeless problem entirely. However St. James’ purpose is to do what it can by trying to fill the material, spiritual and emotional needs of the homeless. The Samaritan Center, 310 Montgomery St., in the basement of St. Paul’s Episcopal Cathedral, offers a hot meal to anyone in need, every day of the week. Breakfast is served on weekdays. 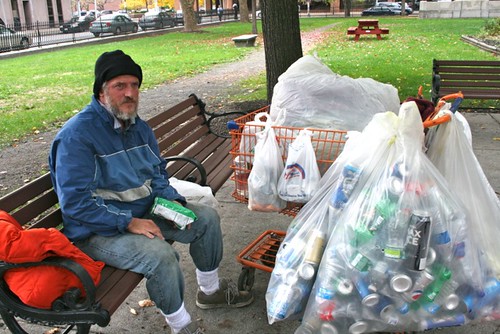 “We are a no-questions-asked organization. If you come in looking for a meal, that’s what you’ll get,” said Julie Gilbert, a Resource and Referral Specialist at the Samaritan Center.

Bob, a homeless man, has been eating at the Samaritan Center for the past four weeks. He said he enjoys this particular center because the food isn’t bad and seconds are available.

“I’ve never felt not welcomed here,” Bob said. “When you’re here you’re like everyone else just wanting a hot plate. The worst stereotype people think of homeless is that they are all lazy and drunk, but the truth is we’re just like everyone else.”

Bob became homeless recently and hopes to be on his feet soon.

“Most people think the homeless are below them and that’s just not right.,” Bob said. “I’ve sat next to you, talked to you, but you’d never know I was homeless.”

Jim Taylor, chairman of the homeless and housing coalition of Syracuse and Onondaga County, said the homeless population includes people who have lived here for a long time and also people passing through looking for work.

“If all the shelters are filled, the county will pay for a hotel room for the homeless, and you can sign up for that at the Civic Center” Taylor said.

After the deaths of Michelle Noce and Tim Wilkin, two homeless people in the area, St. James organized a memorial service for each.

“After Tim died, Father John Manno and I went to the McBride Street camp where he stayed,” said Austin, the Emmaus coordinator, referring to the encampment near McBride Street and Erie Boulevard.

“When we asked his friends if they’d like us to hold a prayer service, across the boards it was a yes,” Austin said. “People who are homeless grieve just like we would. They sat around, laughing and crying as they told stories about Tim and Michelle.”

Austin said the most important thing that one can do is to remember that homeless people are human.

She tries to maintain her relationships with the homeless by dropping by homeless camps two or three times a week just to have a conversation and ask how everyone is doing.

“The impact of a conversation is so great,” Austin said.

“There are people who may have a slew of issues from drug addiction or mental illness to losing a job or family member,” she said. “They’re overwhelmed by negative things and to live on the streets they must adopt an insulated way of living and always be cautious at their vulnerable state.

“But we want them to know we recognize them like anyone else, and we won’t turn our eyes or hearts away from them.”