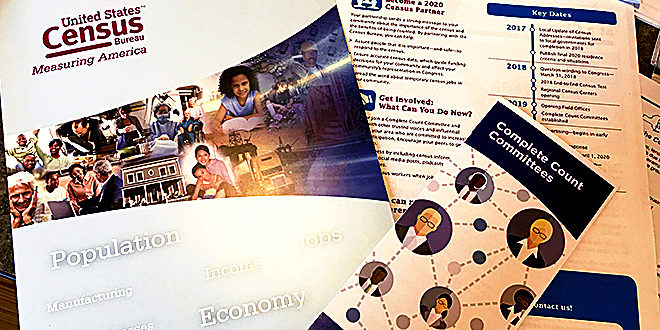 Mayor Ben Walsh and Onondaga County Executive Ryan McMahon have joined forces to encourage neighborhood agencies to become partners in the 2020 Census outreach campaign to ensure no one is missed in the upcoming count.

U.S. Census representatives visited Syracuse Dec. 12 to relay why an accurate count of all New York residents is so crucially important. Elizabeth Burkowski, deputy director of upstate revitalization for New York State Homes and Community Renewal, explained how data from the final 2020 count is used to retain legislative representation and for allotment of $675 billion in federal funding for nonprofit programs and grants. An accurate count is critical to protect New York’s share of that funding — estimated at $53 billion each year, according to the state Department of State.

Deputy Mayor Sharon Owens spoke after the representatives to stress the Census count’s importance. “Our Community Development Block Grant dollars are based on a formula from the census data, so it’s scary to not get an accurate count.”

Representatives visited to discuss strategies for reaching hard to count populations like refugees and non-English speakers, people living in poverty, children under the age of 5 and African-American males between the ages of 18-24.

Ian Hull, deputy regional director of the New York Regional Office, said a test of the census count was conducted earlier this year in Providence County, R.I. Hull noted the most difficult group to get an accurate count of proved to be young, adult black males. Working in partnership with the Urban League, a suggestion was made to place kiosks in barbershops where individuals could complete census forms.

Such creative ideas and partnerships are exactly what the Census Bureau hopes local agencies can help develop here. Efforts are already underway to develop a Complete Count Committee, formed of volunteers brought together by local government and community leaders to increase awareness about the census and motivate residents to respond.

In 2019, a field office will open in Syracuse with advertising and outreach efforts launching in early 2020. From March through July 2020, enumerators will go door to door to nonresponders. The final count is due to the President by Dec. 31, 2020.

Results will be released to the public by April 2021.

Hull said 500,000 new jobs will be offered nation-wide in the next two years in preparation of the Census count, which will be completed April 1. The majority of the job openings will be field positions with a limited number of office support and management positions. Hiring is underway and will continue through Spring of 2020.

The 2020 Census will also be the first time respondents can respond online. Hull noted there are three ways to file: online, by completing the mail-in form and by phone. Information provided is used to compile statistical data at the local, state and national levels. Personal information on individuals will never be shared.

The goal of the census is to count everyone once. “Wherever you are living on April 1,” Hull said, “that is where you are to be counted.”

Visiting representatives shared that some — for example those who are undocumented — are cautious of sharing personal information and may want to abstain from completing the form. In March, the U.S. Commerce Department requested a question about citizenship status be added to the 2020 census. Burkowski said if added to the form, an answer to the question can be left blank. This will allow the census form to still be counted, but she noted this is technically unlawful, as the forms are intended to be completed truthfully and in full. The addition of the question is currently awaiting a decision by the Supreme Court, so Burkowski could not predict if the question will be included or not.

Her concern is having groups underrepresented. “The goal is for everyone to be counted,” Burkowski said. “This will ensure New York has the political power and funding it is supposed to have.”