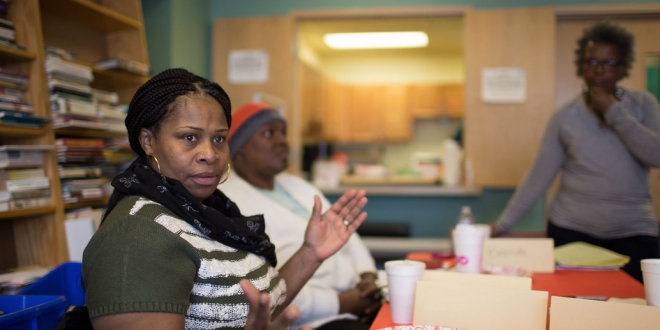 When Brenda Thornton was a teenager, her mom told her she was on her own because her mom was just tired. Thornton has carried pent-up anger at her mom for years, until her son made her realize it’s been affecting her parenting skills.

“One day, my son said to me, ‘mom, you’ve got to turn the page,’” Thornton tearfully told a group of women at the Mary Nelson Youth Center recently.

In January, the center launched a women’s support group to help women balance their personal needs with their other roles. Every Saturday, Women On the Move meets at the center on South Salina Street for discussions about relationships, identity, mental health and whatever else the women need to unburden. 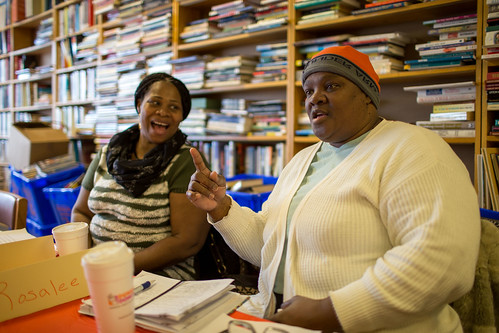 Rosalee Jenkins said that women don’t have an outlet in their everyday life, and wants the women’s chat to be that outlet. | Yu Hua, Staff Photo

“We have a voice, but sometimes we are so many things to everyone else, that we forget about taking care of ourselves,” said Christina Taylor, the director of the group. Taylor said the idea for the group came from Nelson but she has since taken the reins, because empowering women is a passion of hers.

Although the group is still small, with three to six participants at each meeting, Taylor said she hopes that it can grow to be an international sisterhood.

“We believe that when women come from all ethnicities, cultures and backgrounds, that each one can teach one,” Taylor said. “We want to say, ‘hey, you’re my sister, it doesn’t matter where you came from.’ You are important.”

Women On the Move hosted a breakfast fellowship Feb. 13. Women gathered to talk about relationships over breakfast pizza and coffee. Thornton shared details about her relationship with her mother and how that has affected her behavior as an adult and as a parent. 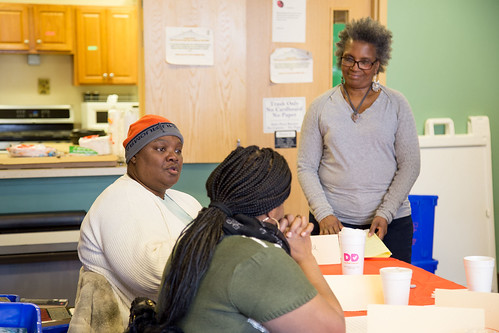 Although she struggled balancing work and classes at Onondaga Community College, Rosalee Jenkins said she will dance with happiness across the graduation stage when she receives her diploma. | Yu Hua, Staff Photo

Thornton, 57, speculated that her mom having her at a later age contributed to their strained relationship. She stressed how women’s relationships with their parents affect not only their relationships with their own children, but also romantic relationships and friendships. Thornton recalled one time when two of her sons fell asleep while she was extensively explaining why they were being disciplined; giving explanations was something her mother never did. She volunteers today as a foster grandparent at Franklin Elementary School.

Taylor’s motivation for helping women comes from her own circumstances as a young woman. Taylor left her home when she was 15, had a child at 16, and endured abusive relationships, a suicide attempt, alcoholism and drug addiction before getting clean in 2000. Taylor said that because of a lack of love from her mother, she deliberately got pregnant at a young age so she could get out of her house and have something to love her back.

“I went a long way around to get where I am, and I just want to not see a young woman struggling to go through what I’ve gone through,” she said.

Taylor isn’t the only one of the group who hopes to use her experiences to lend a hand to other women. Rosalee Jenkins leads a chat session each week for women to discuss specific aspects of their womanhood. 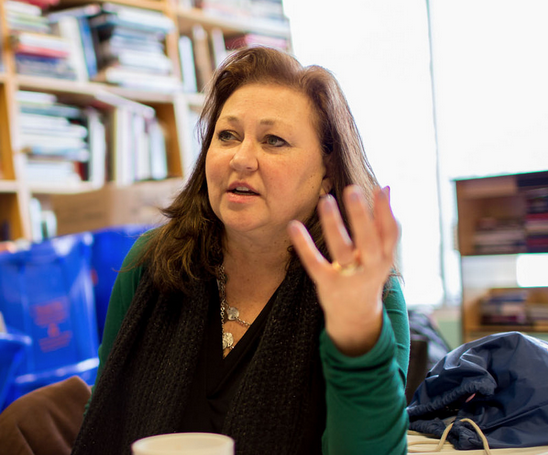 Talking about her grandfather’s alcoholism and its effect on her and her mother, Mary Pagan said it was her children who made her realize where her worrying habits came from. | Yu Hua, Staff Photo

“I want to talk to women about the sacrifices they made,” Jenkins said. “We make sacrifices for our children, our husband, our sister, our cousin, but not ourselves.”

Jenkins references herself when talking about sacrifices, since she made the choice to get a degree in her 50s. She came to Syracuse in 1989 with no education, acquired her GED degree at 50 and is now working toward an associate degree in human services at Onondaga Community College. While working toward her degrees, Jenkins has worked with the Salvation Army’s homeless women’s shelter and currently works with teenage mothers at the Transitional Apartments and Parenting Center.

“It’s valuable to have a relationship with women in the community,” Jenkins said. “It strengthens me as well. Because I can see myself in some of these women.”

Taylor chose identity as the first topic for the first women’s chat session in January. She said it is fundamental for women to establish who they are in order to move forward in life and to find a purpose. Because women are so often taking care of other people, they rarely have time to figure out who they are when not playing those roles, Taylor said. 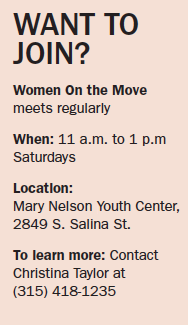 Mary Pagan, a professor at SUNY Oswego, attended the breakfast fellowship and talked about her mother, the child of an alcoholic, and how that affected Pagan’s upbringing and even Pagan’s own parenting. Pagan finds the group essential for bonding with women in the community.

“Women don’t realize where their blessings are, and I’ve been really really pushing these meetings,” she said.

For Taylor, the group’s aim is threefold: to empower, to encourage and to equip. She said that in the future, she hopes that the group can offer more resources, like college and job preparedness, health screenings, and cooking classes. Right now, the group does offer childcare for women with no other options Saturday mornings. To get the word out, the group goes door to door, makes announcements at church and puts up fliers.

Taylor said the biggest barrier to getting the group off the ground is compelling women to accept the help and resources that Women On the Move offers. Often, she said, women are used to balancing everything on their own without any help, and she wants to combat that complex.

“We don’t want people to feel like they have to do this by themselves.”