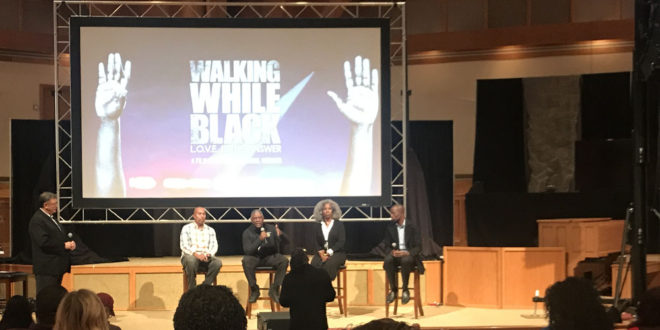 Syracuse Police Chief Frank Fowler speaks during the Q&A panel alongside the creators of the film.

Conference Touts “L.O.V.E. is the answer”

Creator of film “Walking While Black” spoke in Syracuse Oct. 21

A traumatic encounter with police officers sparked one man’s mission to redefine the meaning of love. About six years ago, A.J. Ali was stopped by a young, white police officer while walking in his community of Howard County, M.D.

After exchanging some words, the officer finally told him that he was stopping everyone who didn’t look like they belonged in the community, leading Ali to realize that he was being racially profiled. Though for two and a half years the incident left Ali feeling bitter towards law enforcement, Ali one day decided to finally let the resentment go, partly through the help of his relationship with God.

The incident eventually inspired Ali to create a film that dives deeper into police-community relations through interviews with both sides of the conversation. On Oct. 21, Ali, and producer of the film, Errol Webber, hosted a screening of the film, “Walking While Black: L.O.V.E. is the Answer,” before a small audience at the Gathering Place in North Syracuse. The screening was followed by a question and answer session with Ali and Webber, Syracuse Police Chief Frank Fowler, and retired LAPD Sergeant Cheryl Dorsey, who is also featured in the film.

The movie is mostly made up of interviews with law enforcement officers like former Special Agent Bobby F. Kimbrough, Jr. and Chief Melvin Russell of the Baltimore City Police Department. In addition to examining the issue through interviews, the film also presents a four-part plan to reconciliation between the two sides spelled out in the acronym: L.O.V.E. In practicing L.O.V.E., both law enforcement officers and community members are encouraged to (L) learn about the community and the people in it, (O) open their hearts to the humanity in the community, (V) volunteer to be a part of the solution, and (E) encourage others to do the same.

Before the film, Ali said he hoped the movie would inspire a reaction. “My hope is that after today you’ll pick up on the journey with us and that you’ll tell your own story, you’ll tell this story about the people that you meet today, the experiences that you have, the feelings that you feel. My prayer is that you’ll be moved into action,” Ali said.

Simultaneously, the movie also follows the story of a white cop, Andrew Collins, formerly of the Benton Harbor Police Department, and a black man, Jameel McGee, who was arrested by Collins for a crime he did not commit. Collins tampered with evidence, framing McGee and netting him a 10-year prison sentence, of which he served four years. Collins eventually confessed to his wrongdoing and was sentenced to three years in prison, of which he served 18 months. Years after the incident, Collins and McGee would cross paths several times. After difficult conversations, Collins apologized for what he did, and McGee forgave him. The two even created a bond with each other, today, each looking at the other as a brother.

The case between Collins and McGee carried one of the film’s strongest themes: reconciliation, something Ali tries to demonstrate is necessary to creating better bonds between community and law enforcement. Other themes touched on in the movie include mental health among police officers, racial profiling, the negative nature of police presence within poor neighborhoods and general fear of the police through anecdotes told by many of the featured people in the film.

The themes of the film were further explored in the proceeding question and answer panel.

Community members were invited to the microphone to ask anything and ignite discussion. One man asked whether the panelists believed that the tension between police and community relations stemmed from race, or whether it was a blue versus black issue regardless of race. Frank Fowler responded that though all police departments have extensive hiring processes, some ill-intentioned officers slip through the cracks. 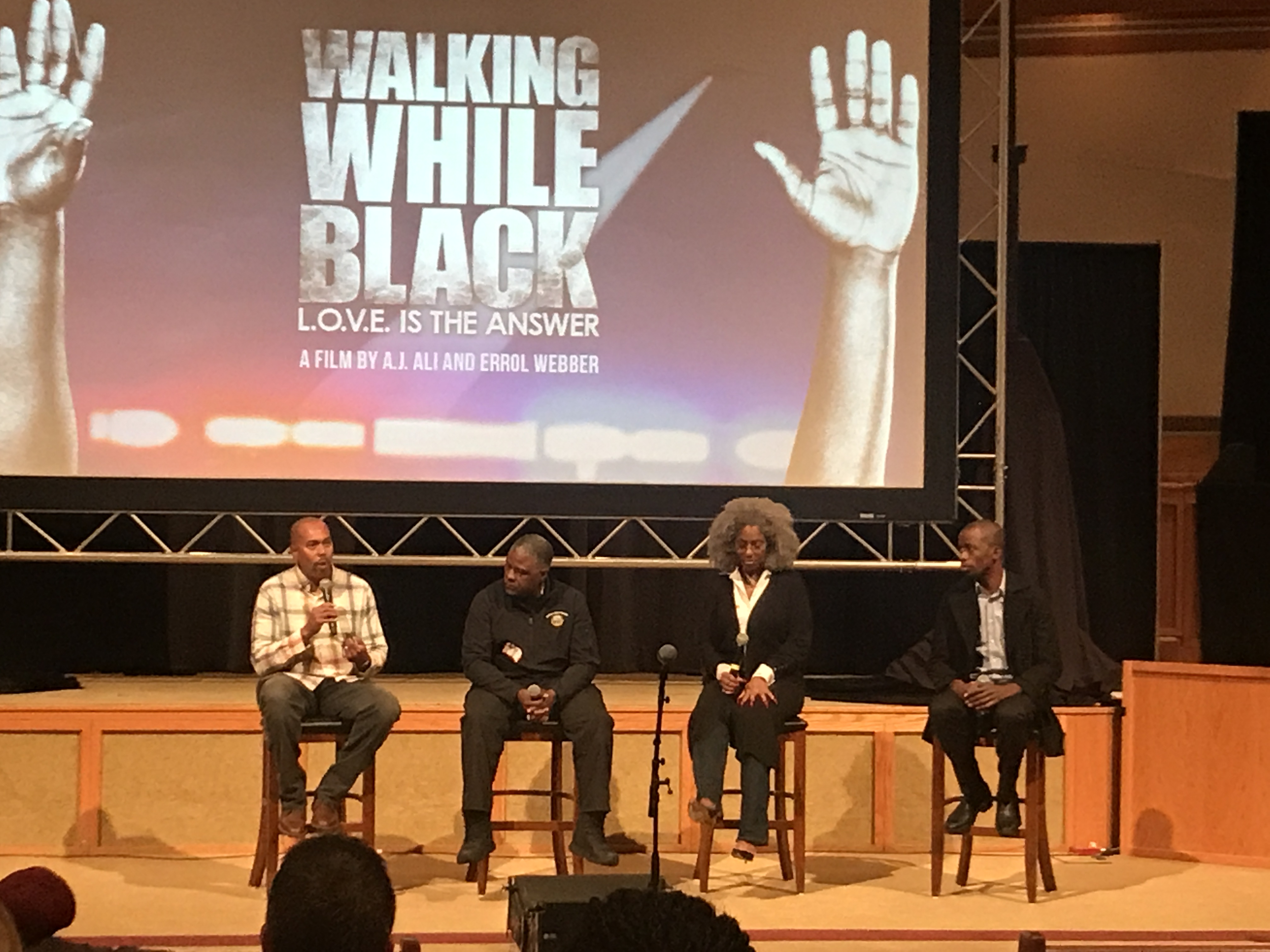 “Police officers are a microcosm of our society, and if we’re honest with each other, there’s a lot of societal ills. Because we hire from our society, we have every right to assume that all of those societal ills exist within the police department to some degree,” Fowler said. “Now if you manage properly, if you supervise properly, if you train properly and if you monitor properly, whatever bias or ills that these police officers show up with, they will be suppressed through professionalism. They will know that that they’re coming into an organization that’s not going to be tolerant of you and your bias beliefs.”

Questions also directed at Chief Fowler inquired whether SPD officers have to meet quotes to which he responded no, but that there are reasonable expectations of officers to provide a professional level of service to the community defined in their rules and regulations.

During the discussion, Fowler also alluded to an incident in Syracuse that he said had the potential to play out on national television, had the situation not have been handled correctly, probably alluding to the June 2016 Father’s Day incident near Syracuse’s Skiddy Park. Following the incident, Fowler said he met with several community groups who were ready to take action, some keen on the idea of coming up with positive solutions together with the SPD and some not. Though Fowler said he eventually abandoned the idea that arose from those meetings, he said he definitely believes it’s necessary for the community and police department to work together on finding solutions to the problems both groups face.

“If we’re going to change this thing, we have to break down those silos, we have to come together and we have to start sharing and communicating with one another if we ever hope to fix this thing once and for all,” Fowler said.

The question and answer panel session was followed by discussions over lunch and workshops throughout the course of the day. Workshops included “Surviving Police Encounters,” and “Public Policy, Race, and the Police,” among others. Ali also announced that the Gathering Place will be a hub for anyone who wants to get trained on the principles of L.O.V.E . He said he hopes the film will catalyze further conversation and influence others to bring the film to their own communities.

— Article and photos by Jasmine Gomez, The Stand staff reporter