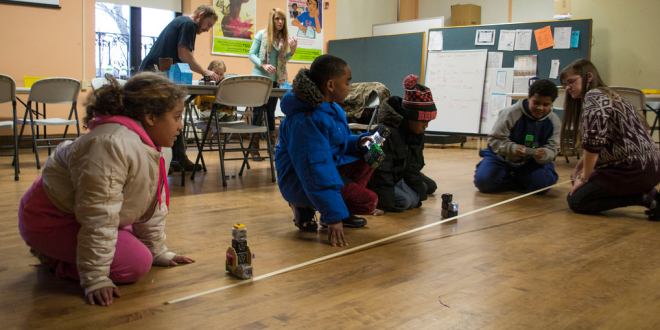 A dozen tiny robots are buzzing throughout the room — flashing, beeping, whirring over tables and rolling across the floor. Their paths are followed by the sounds of children’s laughter and squeaky sneakers on the laminated floor of Beauchamp Branch Library’s miniature auditorium. 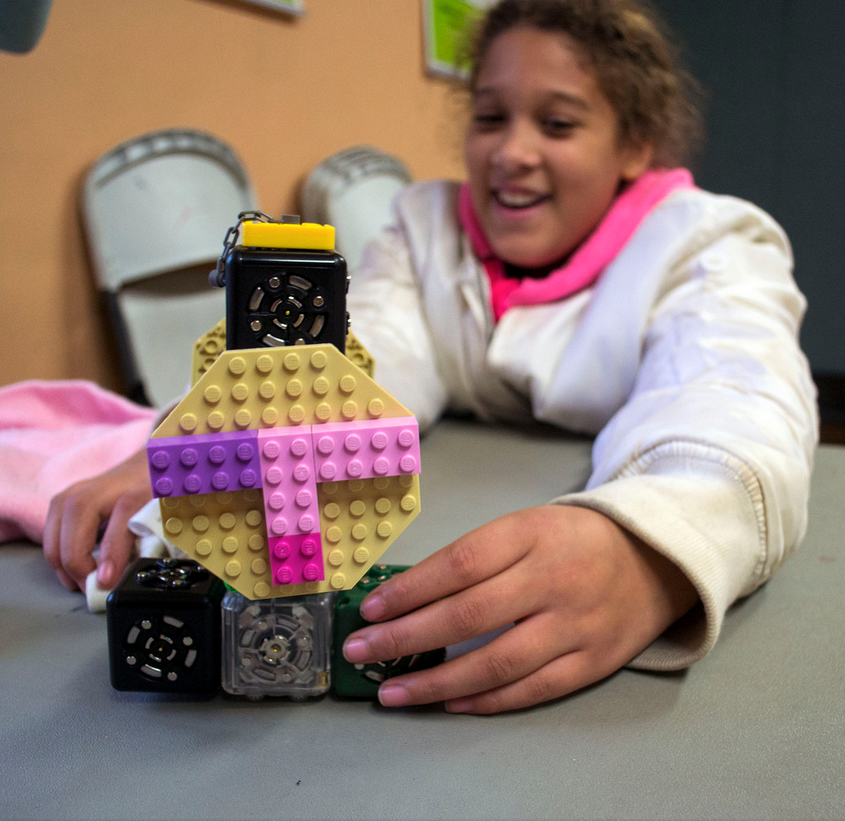 Trinity Chairs, 9, uses Legos to embellish her robot with a capital “T.” Last month, Beauchamp Branch Library had its turn with the Onondaga County Library System’s collection of Cubelets — magnetic create-your-own robots — and about 20 kids showed up to play.

The Beauchamp Branch Library on Syracuse’s South Side made several Cubelets kits available for an event in November. Around two dozen children, ages 6 to 12, played with the robotic blocks and learned how magnets and electricity can combine to create a machine.

Lucas Jenkins came with two of his boys — Thompson, 6, and Huckleberry, 3. He said it’s important that he brings his children to the library often.

“We do any activity we can see. Tommy likes to learn,” Jenkins said. “I try to make sure that they have critical thinking skills.”

Librarian Anne Gregory, who has worked at Beauchamp for the past year and a half, says the library serves as a safe place. At Beauchamp, children 8 years and older can come unaccompanied. Those under 8 need someone at least 13 years old to act as their guardian at the library.

“We really just want to be a safe place for the kids,” Gregory said. “Most of our programs are at 2 o’clock because that’s when we find kids are most active.”

When Gregory opened the doors to the small activity room on the library’s second floor, children ran in, pushing one another, playing with smart phones, and running and jumping off the small stage at the front of the room. Gregory watched and sent out a firm look at those who wouldn’t take a seat.

Patiently, she calls them by name and, after significant effort, gets them to sit. Finally she has their attention.

“What does a robot need?” Gregory asked.

The children light up with answers — a brain, a battery, a mission — and practically beam when Gregory praises them. She hands out sets of Cubelets, which cost about $160 apiece, she says. She visits each table, helping children understand that the blue blocks are the batteries, the black blocks are the sensors, the clear blocks have wheels.

“Yeah, they’re all over the place, and by just working with them, they settle down and become responsible kids,” Gregory said. “Some of these kids don’t get the structure and discipline at home.”

It’s not easy, she said. Some days it’s tiresome, acting as an impromptu babysitter. 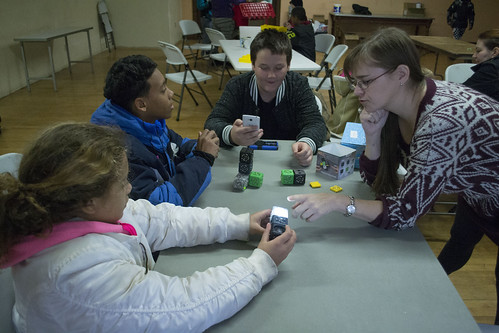 Anne Gregory, right, has been a librarian at Beauchamp Branch Library for the last year and a half. She taught participants what a robot needs to function and how to use the Cubelets to create a working robot.

“When I find myself hitting a wall, I like to say to the kids, ‘Look, I’m having a rough day. You know how to behave. Behave.’ And they respond to that,” Gregory said.

For Trinity Chairs, 9, and her brother Shakur Chairs, 13, Beauchamp is a place where they spend a lot of time. Shakur said Cubelets interested him, partly because he recently attended a robotics camp.

The two got along well, stealing blocks here and there from each other’s robot. They were immersed in creating a robot that could stop rolling and not fall off the table.

“This is so cool,” Trinity said to herself.

After about 90 minutes of building, six children remained at the end of the program to race their robots. Gregory didn’t hesitate to find masking tape and lie on the floor to make different lanes for all of the competitors.

While there was no clear winner — the robots seemed to have minds of their own and a tendency to stray from their lanes — Gregory did the best she could to congratulate everyone.

“It’s absolute fun,” Gregory said. “Seeing them build on those ideas — that’s why I keep doing this.”