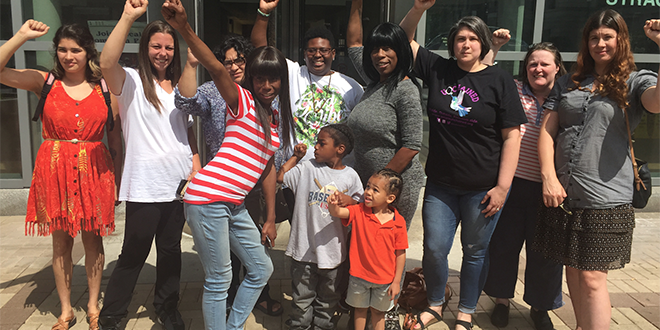 A new Syracuse-based nonprofit is working to reform the prison system and fight injustice.

Unchained was founded in March and aims to use research-based campaigns and input from prisoners and their families to make the bail process more fair, and to make prison programs more focused on rehabilitation rather than punishment, among other initiatives. 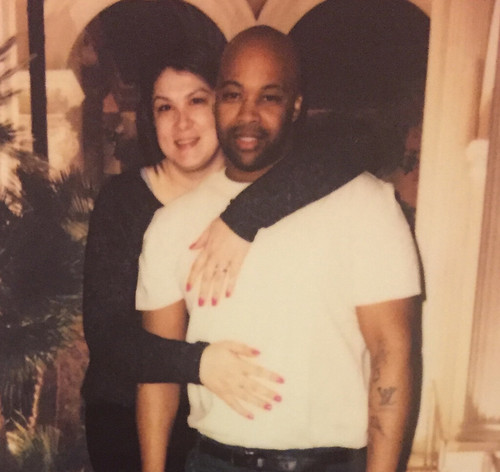 The Singletarys in the Elmira visitor room. The couple were married at the correctional facility in May 2017. | Provided Photo

The organization was founded by Derek Singletary and Emily NaPier Singletary, a married couple who knows the system well. Derek Singletary is serving a 20-year sentence for first-degree manslaughter. He fatally stabbed Darnell Brown in 2010 on the eve of Brown’s 27th birthday.

The Singletarys founded the organization believing that dedicated people can change the toughest parts of society. The goal is to end the system of incarceration and address societal issues such as economic inequality, racism and white supremacy, NaPier Singletary said.

“If you created communities where people’s basic needs were met, and where people felt empowered and were treated with dignity and respect, you wouldn’t have the need for the systems of policing and prisons that we have right now,” she said.

The organization is currently working on a court watching project in partnership with the Alliance of Communities Transforming Syracuse, or ACTS. Their goal is to assess how Onondaga County implements bail, and ultimately to end cash bail. Volunteers with the organizations are attending arraignments and documenting how bail is being applied in Syracuse.

“Bail is supposed to be just assurance that the person will show up to their court dates,” NaPier Singletary said. “It’s not supposed to be tied to the severity of a crime.”

Recently, ACTS worked on a countywide campaign to end youth solitary confinement. A federal judge ruled in 2017 that Onondaga County must stop housing teens in solitary confinement at the Onondaga County Justice Center. They were placed in solitary to keep them out of the general, adult population. The county has since moved the teens to the Hillbrook Juvenile Detention Center.

Nancy Gwin, chair of the ACTS’ criminal justice task force, said an inability to make bail was what landed many of those teens at the justice center in the first place.

The Katal Center for Health Equity and Justice found that nearly 70 percent of those detained in New York state local jails are awaiting trial, so are technically innocent in the eyes of the law.

Christopher White, a member of Unchained’s board, said the members of the organization hope to compel judges to set non-monetary forms of bail, such as promissory notes that people can sign stating that they will attend their court date. Chris White, a member of Unchained’s board, speaks at a court watch training. | Provided Photo

“It’s assumed that everyone is innocent until proven guilty through the court of law,” White said. “If we’re saying people are innocent, why are we penalizing them with cash bail?”

Cash bail is a problem, Gwin said, because it creates a large divide between people who have the means to pay their bail and those who do not, and that bail can be set intentionally high so people will be unable to be released.

“I feel pretty clearly that our mass incarceration system is intentional and designed to lock people up,” Gwin said.

White, who served 10 years in prison for second-degree burglary, said he believes he was discriminated against for his socioeconomic status by receiving a sentence of long-term incarceration, over other forms of punishment.

Thirty-three volunteers attended the first training session in September, where they were taught about bail and how to take notes on forms while sitting in on arraignments, NaPier Singletary said.

“We think that that’s a really big problem that needs to be addressed,” NaPier Singletary said. “Our jails shouldn’t be financed by the people caged inside of them and their loved ones. That’s just ludicrous.”

Derek Singletary, who is currently at the Elmira Correctional Facility, said he helps provide Unchained with the perspective of those who are currently incarcerated.

Gwin, who said she was incarcerated for a period of six months after trespassing during a social justice protest, said she is passionate about prison reform because during her time in prison she saw how the system of incarceration disrupts society and families, and does not always give people access to enough useful resources to re-enter society.

Singletary is currently taking classes in prison offered through Cornell University. Despite telling the judge at his sentencing that he had no intention of changing his ways, Singletary says he has been rehabilitated. He credits his wife and access to higher education as the forces that inspired the change.

The Institute for Higher Education Policy, a nonprofit organization that seeks to increase accessibility of higher education, found that recidivism rates were 46 percent lower amongst incarcerated people who had taken college classes.

Unchained isn’t here to tell the Syracuse community what needs to be changed in the system, because the community already knows, the Singletarys said.