Drums in the Library

The air bends, reflecting the cauldron heat back from dry particulate earth. Following the well-trodden path to a cooled sanctuary, the echoes of long felled fauna are found, a rediscovery. Ancient rhythms, curled and entwined with modern voice are carried gracefully on the slightest breeze. Despite the illusion of a distant country, the heartbeat of drum and dance now emanates from familiar territory. 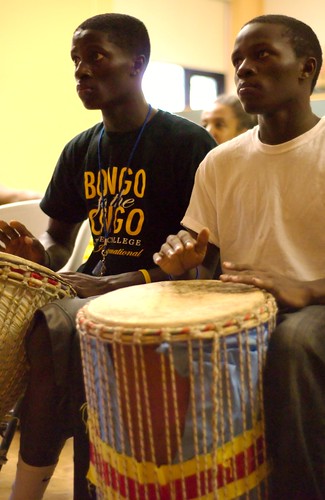 Traditional dance and song were performed on the sweltering summer evening of July 19 by members of the Congolese Community of Syracuse.  The Beauchamp Branch of the Onondaga County Public Library welcomed the celebration of Congolese culture, highlighting positive traditions of a region long torn by the horrors of internal warfare.

Fingers strike bringing twin drums to life, followed swiftly by the ethereal sound of voices in unison.  The performers entered the auditorium of the Beauchamp Library moving sinuously in line, separate elements forming a cohesive unit.  Rhythmic representation of a community, the performers allow the observer a window to the vibrant culture of the Congo.

Charlotte Mihigo, a performer and member of the Congolese Community of Syracuse, stated, “the meaning of the dance is just the joy.  It is to rejoice, to tell the story of our home.” 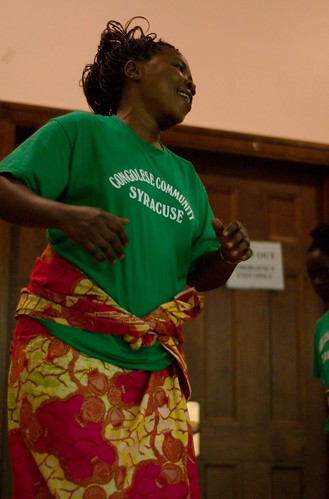 The group, performing since 2002, acts as ambassadors for the Congolese population of this city. They graciously present the performance arts of their culture and deliver information to educate the public about the continued atrocities occurring in the region of the Congo.

In spite of a tumultuous history, the Congolese community promotes a vision of hope.  The heart and soul of the people laid bare in a passionate display of song and dance.

“People may have problems, private problems you may not know. I may not know but they can come and rejoice with dance and celebrate our culture,” were the words from Emanuel Ndeze, a member of the Congolese Community of Syracuse, punctuating the performance and allowing another glance at the strength of the Congolese people.

– Story and photos by Jeremiah Howell