Dunbar Goes to the Fair

A little N’awlins flavor has come to Syracuse by way of the Dunbar Association, Inc. The Dunbar Center is running a booth at The Great New York State Fair selling catfish po’ boys. 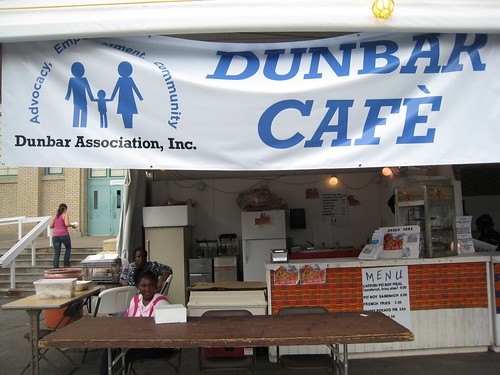 Dunbar Café, as the booth is called, is selling the Creole creations as a fundraiser for the center’s youth program. The café is located within the Pan-African Village area of the fair, near tram stop No. 2.

Estella Sankey, whom fellow Dunbar staff credit as being the brainchild of the po’ boy operation, got the New Orleans recipe from her sister that resides in New Orleans.

Sankey, the Sunrise special needs youth coordinator at the Dunbar Association, said the key to making a po’ boy different from any other submarine sandwich is making sure the bread is toasted and just right.

“When you make it, toast the bread, get your tartar sauce, lettuce, tomato, onion and everything goes on that bun and then you eat it. That’s a po’ boy,” she said. 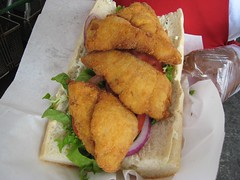 Louella Williams, executive director of the Dunbar Association, said the center brainstormed for new fundraising ideas that would make an impact.

“We wanted to do something different because we knew we had to step out of the box, so we decided to do this,” she said.

As this is Dunbar’s first year with the booth, Williams said at times business has been slow, but it picks up. The center’s youth participated by passing out flyers to promote the booth and Williams said that really helped to generate business.

A po’ boy sandwich sells for $6, and a meal including fries and coleslaw, is $9. One hundred percent of the proceeds from the po’ boy sales will go toward subsidizing the youth program at the center. Each sandwich is made fresh to order, and to each customer’s liking. It’s service with a smile at Dunbar Café. 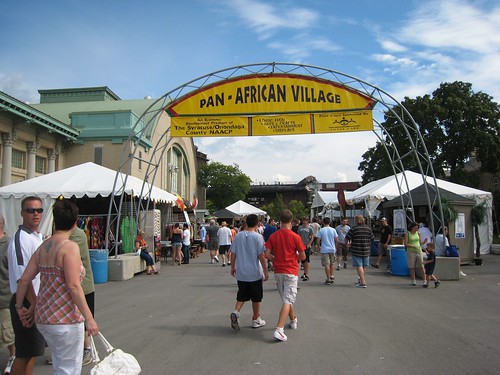 “It’s so fresh, we had to smack it before we ate it!” said customer Tammy Bordinger of Oneonta, N.Y. “If you’re a fish lover, this is the place to come.”

Andrea Lewis, a vendor at nearby booth, Hannah’s, said she has had lunch at the Dunbar Café every day except for the day it rained.

Dunbar Café has already committed to a booth for next year’s state fair and plans to add jambalaya and breakfast options to the existing menu.

Everyone at the Dunbar Café is volunteering his or her time to be there, and with the booth open from 9:30 a.m. to 10 p.m. for the 12 days of the fair, help is often needed.

For those unable to sample the “scrumptious Louisiana Dunbar po’ boys,” as Sankey refers to them, before the fair ends Sept. 5, there is still hope for a taste and an opportunity to donate. Dunbar plans to feature po’ boy lunches at the center for one day during the last week of each month, from 10 a.m. to 2 p.m. Interested tasters and contributors to the center’s youth program can call Dunbar Center at (315) 476-4269 for more information.

Dunbar Café volunteers are working for their youth and having fun doing it.

James Jackson, a volunteer chef for the booth, said, “Don’t talk about it, be about it. Don’t sing it, bring it, and get it done. That’s what we do.”