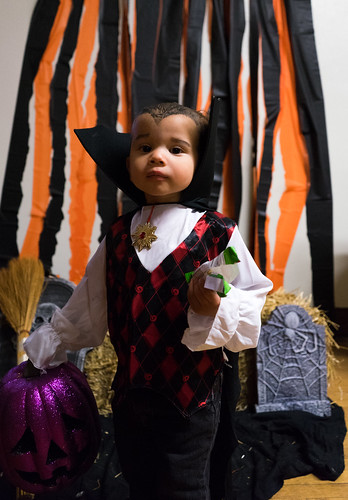 Ruberta Rodriguez brings her son, Darryl Hill, Jr. to Beauchamp every weekend to use the computers, read books and enjoying the events at the library. This was their first time at the Spooktacular. She spent time mingling with other parents and helping Darryl play bingo. He shouted, “I got it,” after winning a game. “He’s enjoying himself and having such a great time and so are the other kids,” she said.

Residents — a total of 194 — from all parts of Syracuse were in attendance on the rainy, cold day; children and adults dressed as princesses, ninjas and birds to name a few. The event also brought out newcomers, oldcomers and everyone in between.

Christine Richie, event coordinator, said it was nice to see that most of the volunteers, who started coming to Beauchamp when they were between 6 to 8 years old, returned as teens to help run the event. She reflected on when the Spooktacular first began with a few kids watching “Goosebumps” movies, eating popcorn and painting pumpkins.

“The whole reason I do this event is to allow the kids to have a safe place to come to celebrate Halloween, without having to worry about going door-to-door to random houses,” Richie said. “We encourage the kids that do come, to participate, and it’s nice to see they are.”

Popular costumes included: Minnie Mouse, Spiderman, Batman, the Hulk and princesses galore. The infamous Twitter bird even made an appearance by Halloween first-timer 15-month-old, Henry with his mother, Zoe Folley, dressed as a bumble bee.

Ann Gregory, the children’s librarian, marked the kids hands with a Boo stamp and gave them a paper bag to collect candy and treats, as they walked through the door. She said she was happy to see so many kids in attendance. 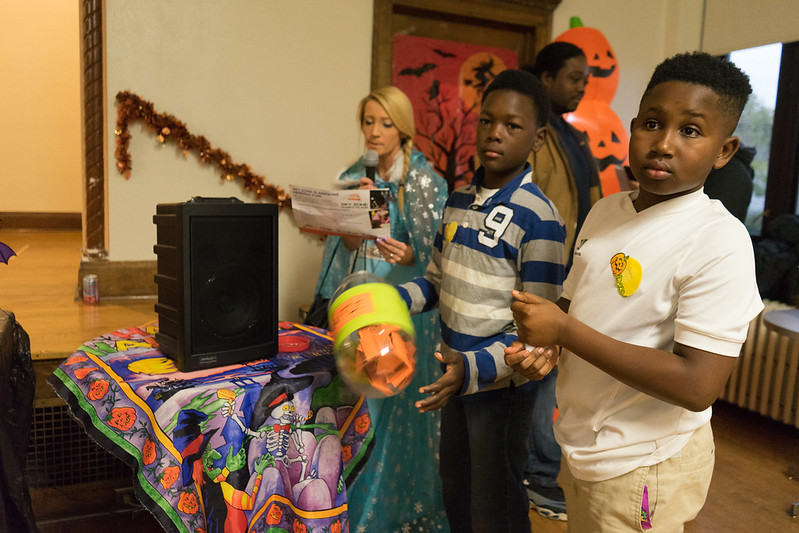 “Events like this bring in kids from the area that we don’t get to see as much, which is an awesome opportunity for them to get to know the library even more,” she said.

Kids stuffed the raffle box, in order to win prizes and participated in Halloween-themed festivities and games such as skeleton Twister, face painting, bean bag tosses, photo booths and a book giveaway. For every game won, children received one to two pieces of candy in their bags. One station, even allowed attendees to explore their creative writing skills by creating “Adjective Pumpkins.” The challenge: pick out a pumpkin and an adjective from the table and match the two through decoration.

Michele Gillette, a South Side resident, came with her two great nieces, Abrionna and Jessica, and her great nephew, Brandon, who got his face painted by volunteer Marqueshia Smith.

Like many parents and residents of Syraucse, Smith was happy the children were in a safe atmosphere. “I love kids, and I’m just happy they are here — safe and not out with those ‘clowns’,” said Smith, referring to the recent clown sightings in Syracuse.

Danielle Duncan, dressed as a vampire, agreed saying that was part of the reason she doesn’t take her daughters, Janelle and Ranelle, trick or treating. Janelle, 9, won the first raffle, which was a free ticket to Skyzone.

This year, Richie and the staff were able to accommodate a much larger group of attendees with cookies, chips and drinks. She was excited to see some youth she hasn’t seen in several month, noting that although some kids move away, they always seem to come back for Halloween. One was Monajsia Adams, 16, who returned as a volunteer for several games.

Adams began coming to Beauchamp when she was 8 years old. Richie said she stopped coming six months ago and randomly showed up and asked to volunteer.

“I came back because I always liked coming here, even from the time I was little,” she said. “And now I can bring my little brother and sister and share Halloween with them.”