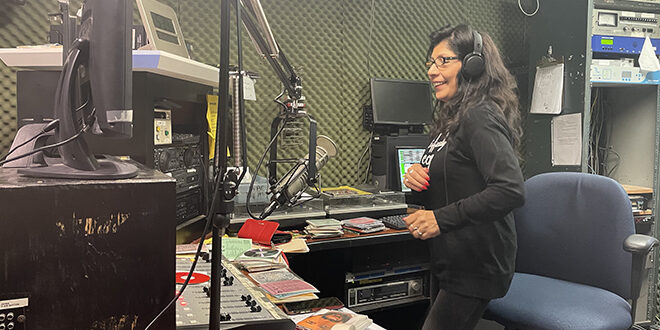 How Fanny Villarreal perseveres to advocate for others

Leaning over to insert a merengue mixtape into the DJ mixer, she makes her way back down to her seat, bringing the built-in microphone within an inch of her lips, then presses a switch that makes a sign above the door in the sound-proof room brightly glow the words On Air in red.

“It’s 39 minutes after 4 p.m. and we are here to bring you a lot of music, a lot of happiness, a lot of positivity and a lot of information,” said Fanny Villarreal, as she cheerfully welcomes her audience.

Villarreal is live on Nosotros Radio, the nonprofit show she co-founded and first introduced to airwaves nearly 27 years ago, not long after arriving in Syracuse from Peru. While she is well known as being the bubbly and eccentric host who hops on air each weekend to speak with her audience, she plays a bigger role in the city as one of the Latinx community’s strongest advocates for social change.

With a smile, she moves closer to the microphone and translates the same message in Spanish, allowing her primarily Spanish-speaking audience to hear what she has to say, before turning up the fast-paced energetic Latin rhythms.

Every weekend, Villareal drives six miles east from the city to a quaint trailer in the middle of a field in East Syracuse, where the WVOA radio station is located. The bilingual show is only a small part of her role as the executive director of Syracuse’s YWCA, a position she’s held since 2013.

Like her radio audience, her coworkers notice Villarreal’s abundance of energy. Nora Putman, the YWCA’s Women’s Residence Supervisor, has worked with Villarreal at different organizations over the past 27 years, including the Spanish Action League and PEACE. After all these years, Putman still sees Villarreal’s passion for advocating and serving the community.

“Fanny never gets tired,” Putman said. “I think she really works for her community. She doesn’t forget where she comes from; she knows who she is and there is no limits. She will continue, always.”

Earlier in the week, Villarreal celebrated the YWCA’s Residency Program for creating new housing on Genesee Street for women who’ve survived domestic violence  — a program she and her team have worked to develop for several months. The prior day, she attended a board meeting, where she had to introduce Mayor Ben Walsh, before running to her youngest son’s trumpet concert.

The following day is no different. Her planner is full; black ink fills nearly every inch of a page, offering little room for breaks.

This is Villarreal’s life.

Despite her chaotic schedule, she’s calm. Sitting in her office where budgets, flyers and other YWCA documents lie scattered, Villarreal listens to an instructor from an online class she’s taking talk about how to manage chronic disease. While she herself doesn’t suffer from a chronic disease, she has family members who do and knows that some within Syracuse’s Hispanic community silently endure such illnesses, due to the language barrier. She plans to share the information she learns with the community — in both English and Spanish — on her radio show.

Keeping hold of a black pen between fingers with manicured nails, she scribbles down notes. Eventually, the meeting comes to a close, and it’s time to join another virtual meeting. This time on marketing.

Both those within her inner circle and new acquaintances quickly take notice of her vibrant personality.

José Miguel Hernández Hurtado, the founder and artistic director of La Joven Guardia del Teatro Latino, is Villarreal’s best friend. Both he and Villarreal have a bond that they say is equivalent to siblings, after knowing each other for 22 years. Jokingly, Hernández Hurtado said that Villarreal is like Margaret Thatcher, the first female British prime minister, not in terms of politics but because she’s an “Iron Woman,” he says.

“I describe her as a very strong woman with very strong character, and on the other side, very vulnerable, fragile and sentimental. She appreciates beauty and has compassion,” he said.

While she says that stress constantly remains on her mind, her body has enough energy to dance. Villarreal loves music, specifically Latin music, her favorite being salsa. She plays music in the office both when she’s stressed and when she is trying to get into the zone, rhythmically pacing through her work to the beat. Like salsa, she can move fast or slow, depending on the task at hand.

Villarreal says she does her best to be a good example and mentor in the community.

Stephany Cruz Pérez, an intern at the YWCA and public health student at Syracuse University, has been one of Villarreal’s mentees since the fall 2021 semester began.

“I would thoroughly say that Fanny is a great example of a woman,” Cruz Pérez said. “She’s very driven and very passionate. She loves her job. She works overtime to fulfill her role … She’s good for the Hispanic community — the minority community.”

Coworkers, friends and members of the Latinx community see Villarreal’s influence in the wider community as well, especially since she supported Walsh during the mayoral election and has worked with him at recent events.

“Fanny working alongside the mayor is a great opportunity,” Cruz Pérez said, “because they both have similar agendas. They both want what’s best for the community, and now with the mayor being reelected and Fanny being part of it, it allows for Fanny to be able to have more interaction within the community … to be able to stand and speak up for the minorities within our community.”

While she may not currently be active in the political arena, she continues to be motivated by her work between the YWCA and Nosotros Radio.

“What keeps me going is that when I’m on the radio, someone will call me and thank me for providing that information,” Villarreal said. “When I do provide information, I feel like I’m doing something good for the community, and that makes me happy.”