In a Sept. 13 community meeting attended by casually dressed local residents, Andrew Maxwell stood out. Dressed in a crisp navy suit, the 27-year-old director of the Bureau of Planning and Sustainability clenched his hands around his knee, listening intently to his City Hall colleague, Katelyn Wright, describe new zoning codes for the city he cares so much about.

“I just love Syracuse,” Maxwell said in an interview two days after the Tomorrow’s Neighborhoods Today meeting, where community members gather to discuss local issues. “I went to school with people from all over the South Side and other parts of the city,” said the 2001 graduate of Corcoran High School. “So I have a real affinity for those neighborhoods.”

That played a major role in why Maxwell, who holds a master’s degree in public administration from Syracuse University, decided to stay in the city when so many of his fellow graduates decamped for New York City and Washington, D.C., he said. He hoped to make a difference in Syracuse. 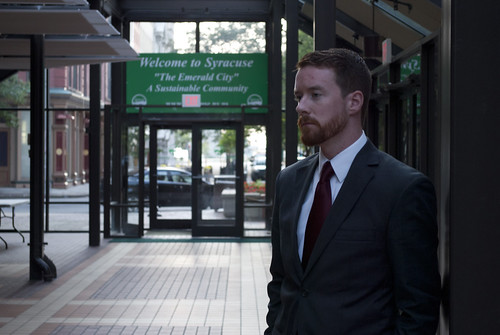 Andrew Maxwell is the director of Syracuse's Bureau of Planning and Sustainability and a South Side native. -- Lena Budd, Staff Photo

Maxwell, whose mother, Patti, was a social worker, has already helped Syracuse by writing the application that won the city a highly competitive $400,000 grant from technology giant IBM to study the problem posed by vacant properties.

This initiative will apply IBM’s analytical expertise in addressing the city’s vacant housing issue, said Maxwell, who grew up in the Strathmore neighborhood on Carlton Road. A team of IBM engineers will spend three weeks in Syracuse working with city officials to devise an information-driven tool that will mix data sets on a range of factors — from crime to trash-collecting patterns in a given neighborhood — to predict the causes of vacant properties, he said.

“IBM wanted applicants to select one main problem to focus on,” Maxwell said. “That’s a very difficult thing to do, just focus on one specific problem. But in thinking about neighborhood health, we decided to focus on vacant properties.” Vacant housing has been a growing trend in Syracuse. 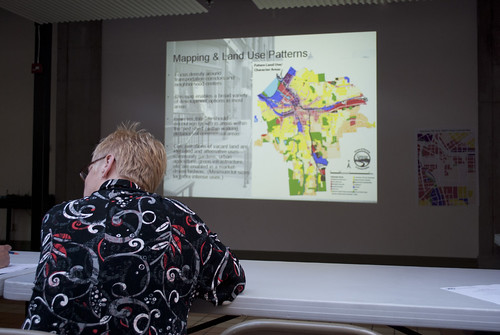 Members of the community view a presentation given by Katelyn Wright, Land Use Planner with the Bureau of Planning & Sustainability, on the Syracuse Land Use & Development Plan 2040 during the Sept. 13 Tomorrow's Neighborhoods Today meeting held at the Institute of Technology at Syracuse Central. -- Lena Budd, Staff Photo

Rich Puchalski, director of Syracuse United Neighbors, a grassroots organization devoted to protecting city neighborhoods, said city officials aren’t delivering on this pressing issue. Close to 45 percent of vacant properties in Syracuse are in the organization’s target area, including the South Side, he said.

“Vacant houses present a lot of problems to nearby neighbors,” said Puchalski, citing trash and crime. “There’s no political will in Syracuse to turn this problem around.”

One government-led initiative to refurbish the city is the Land Use and Development Plan 2040, a comprehensive vision that outlines priorities and goals for city and neighborhood-specific development, according to Maxwell’s colleague, Wright, who is a land use planner.

Paul Driscoll, the commissioner at the Department of Neighborhood and Business Development who is instrumental in implementing the Land Use Plan, said the plan’s goal was not to alleviate the issue of vacant housing. Still, if the plan’s objectives are met, such as creating more walkable streets and interlocking commercial centers, vacant housing could be reduced, he said.

“I wouldn’t say that we’re undertaking this Land Use Plan to address vacant housing,” Driscoll said. “Although the byproduct of it should.”

Ari Fishkind, the public affairs manager at IBM Corporate Affairs and Citizenship Office, said the project is under way but still in its early stage.

“The IBM team is spending this week getting better acquainted with the stakeholders involved,” Fishkind said in a Sept. 15 email. “They’ll be conducting more in-depth analysis of the issues involved next week, then making recommendations to the city by the end of the month. As they are primarily in listening phase right now, they are not in position to offer much feedback — yet. But stay tuned.”

Maxwell said he does not know what the IBM engineers are planning, because he doesn’t “think they know themselves” yet. But, he said if he can eventually bring more people to reach their potential through his public service, then that’s something he wants to attempt.

“Having gone to high school with people that were facing a lot of challenges that I didn’t have to face in my own home or in my own neighborhood, I saw a lot of bright and wonderful people not necessarily go on to their potential, because there were things outside their control,” Maxwell said. “That was something that bothered me a lot.”

His attitude encourages others to work hard for the city, too. Maxwell’s “dedication and energy” are contagious, Wright said in an email. She added that Maxwell, who said his hobby is working, is skilled at building consensus and holding a big-picture perspective on projects.

Wright said, “While he certainly understands the need to deal with the daily ‘nuts and bolts’ of city government, he is really a visionary and adeptly keeps the many pieces of our City Hall team working towards the common long-term goal of revitalization in Syracuse.”