Sometimes having no neighbors makes for the worst kind of neighbors. That’s the case for Khreltz Vest, who lives a couple of blocks east of McKinley-Brighton Elementary School on Pleasant Avenue with her husband, three children and dogs. Both houses next to her home are vacant. 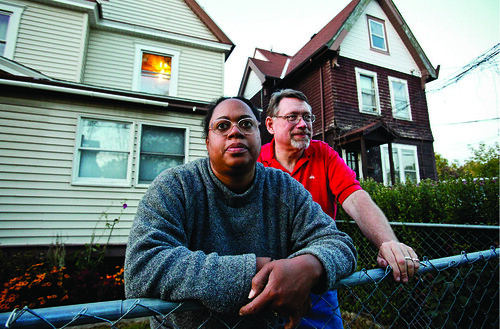 Khreltz Vest and her husband, Gary, live next to two vacant homes on Pleasant Avenue in Syracuse's South Side. -- Mackenzie Reiss, Staff Photo

“These two houses are a hazard. They are a draw for all kinds of vermin,” Vest said, as she explained that she’s seen rats, which have infiltrated the building to the east of her home, scurrying around. The woman two doors east said the rats have overrun her porch before, too. Vest said an elderly lady owns the property but doesn’t live there anymore. The woman’s children, Vest said, pay the taxes, but don’t take care of the place. In their absence rats, squirrels, bats and other wildlife have taken refuge inside.

Kids have snuck into the house to the west of Vest’s home to smoke marijuana; she said she could tell from the smell that wafts over. The city owns the property and has told Vest that it will be torn down, but she’s been waiting for a few years now.

The ramshackle vacancies dramatically depreciate the value of her home, which she and her husband have been renovating themselves since they bought it three years ago. She calls the buildings’ possible demolition “the dream of tearing them down.” 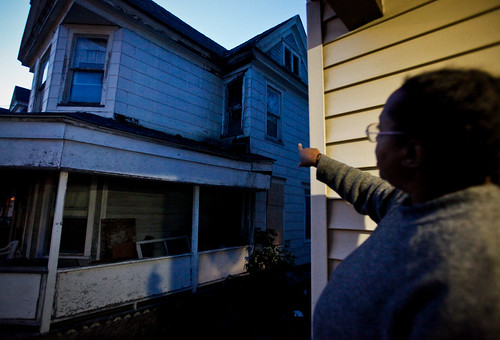 Many South Side residents share the Vests’ problem. There are 1,152 vacant houses on the South Side, the most of any Syracuse city neighborhood, according to the 2010 Syracuse Housing Plan. More than one of every five houses is vacant. Paul Driscoll, commissioner of the city’s department of neighborhood and business development, called it a “city housing epidemic.”

But with federal and state money having mostly dried up, Driscoll said the city will have to try a new strategy for rehabbing blocks of vacant properties, a strategy that could potentially have a lot of upside for South Side residents.

Under a new plan, an agency that’s part city and part corporation will be in charge of the properties, with more flexibility to find owners that will care for them. Driscoll said two changes will allow the agency, called the Syracuse Urban Renewal Agency, find better matches.

First, the agency, unlike the city, will not have to sell the property to the highest bidder. Instead, it will also look at the bidder’s plan to renovate the property, giving well-intended people who may have less money a chance to buy. This means that qualified South Side residents who couldn’t afford the higher prices may still win an auction based on their plan to, for instance, tend and rehab a lawn or build a driveway.

“We can look at each proposal separately and say, ‘What does this person wish to do with this property?’ We can then more properly unload property that is tax-delinquent or code-violated but the city never had the stomach to take it from the owner,” Driscoll said.

The new arrangement will allow the agency to take property back if the new owner doesn’t begin to revitalize it within a certain amount of time — something the city couldn’t do — to ensure properties improve. 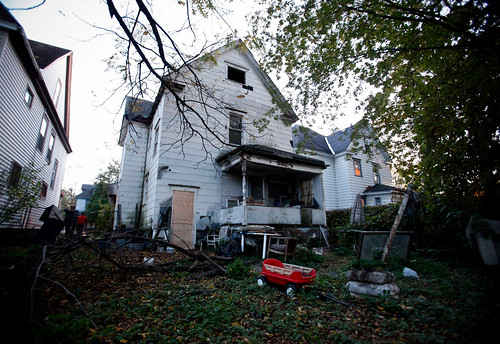 The second big change will be that the agency will use nonprofit neighborhood developers, like Home HeadQuarters or Jubilee Homes, in a new role: to look at the needs of entire neighborhood blocks, house by house, so they can explain to the city exactly what should be done to rehab the entire area.

“That’s what we think these neighborhood groups are best at. Their boards are made up of neighborhood residents, so they should know better than the city what the nuances of a block or area are,” Driscoll said. “If five houses need gut rehabs and two need to come down and one needs to be built and we need to subdivide some land into performing property, that’s what we want to know. We want to know the whole plan.”

This block-level approach will prevent the city from repeating mistakes it has made in the past — in particular, revitalizing individual houses that were next to properties so worn down they greatly reduced the new buildings’ value before anyone even moved in.

“We’ve built a $200,000 house that, before the people even moved in, a bank appraisal put at $50,000 because the housing around it was so dilapidated,” Driscoll explained.

Vest said the old system also made the city seem out of touch.

“The city doesn’t know what’s going on. To them this is just an address on the list,” she said.

In order for this new strategy to take place, the Planning Commission, the Common Council and the agency itself must approve it, since the agency already exists but will be performing a new role. Driscoll anticipated all of that being done soon, so the mayor can give the go-ahead to start seizing properties.

This new system, in broad strokes, is the large-scale approach the city will take to redevelop vacant properties and revitalize neighborhoods. There will also be smaller-scale plans, such as the recently announced partnership between the city and the Syracuse Housing Authority to build 50 single-family homes on the South Side as public housing for low-income families.

Driscoll hesitated to estimate how many properties could be seized and renovated yearly under the new plan, but did venture a guess.

“It could be in the hundreds rather than the tens that we are turning over now.”

The Vests hope that the run-down properties that have surrounded their home for years will be one of those fixed quickly. Khreltz Vest said that if the “dream of tearing them down” became a reality, she’d like to try to buy both lots on each side of her home: one for a driveway, the other for a yard.