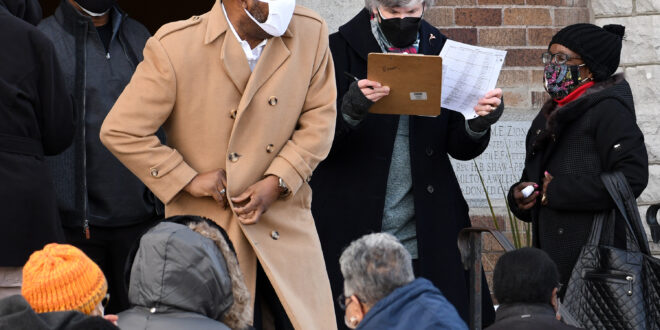 The church is the first pop up point of distribution for the COVID-19 vaccine in Syracuse as part of a New York State initiative to equitably and effectively vaccinate its residents. Gov. Andrew Cuomo sent a message that played during the church’s Sunday service addressing the reason for these pop-up vaccine clinics.

“COVID was low tide in America,” Cuomo said. “It exposed the racism, the discrimination and the injustice that laid on the bottom of America. Blacks died at twice the rate of whites. Hispanics died at one and half times the rate of whites. We now have a vaccine that will save lives, but it will only save lives if we take it.”

According to County Executive Ryan McMahon, the effort was coordinated through credible community members, like pastors and other community leaders. One of whom, undoubtedly, was Jaime.

Jaime announced the church would be a distribution site during his service Jan. 24 before introducing the governor. According to Jaime, the church received notice this past Thursday of the opportunity. They quickly reached out to community groups to connect with seniors and other members of the community who need to be vaccinated. All vaccination slots were filled this way, by directly reaching out to those who were eligible.

“We’re excited because we have an opportunity to be a haven of not just healing, but also hope, and our sanctuary tomorrow will be the place where these vaccinations are taking place,” Jaime said during church service Sunday.

There has been a deep skepticism of the vaccine, especially in the Black community. According to a study by the Pew Research Center, Black Americans are significantly less likely to take the vaccine than any other racial group in the country.

“Hopefully what [skeptics] see and experience through their neighbors and those that have been able to take the vaccine here today will encourage them to get vaccinated,” Jaime said. “Historically, we know there have been some challenges with communities of color and healthcare, and I think that those questions are legitimate. So we’ll allow time for people to get more information and become educated, and prayerfully in the end, become vaccinated.”

In addition to having local leaders like Jaime encourage vaccination, Gov. Cuomo reiterated the vaccine’s safety and said during his virtually delivered message Sunday, that his mother and his daughters were receiving it as well as himself.

The church will open again in three weeks to distribute the second dosage to those who received their first dose today. Jaime also said he’s heard there will be more pop ups across the city in the future.

“It was overwhelming in a great way to see the community be able to be vaccinated,” he said. “Many people did not have access to downtown or to the internet, and they were just ecstatic to be that close and be vaccinated.”