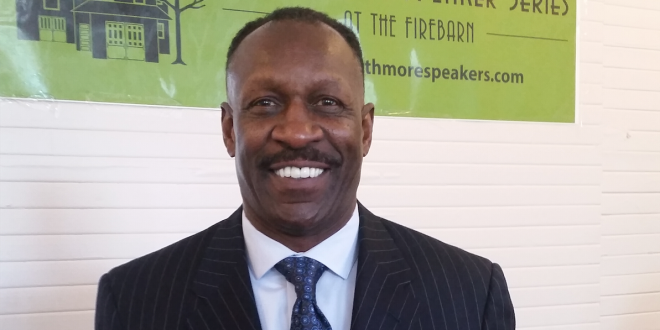 Billy McBride grew up in Public Housing at 110 Weiser Court in Pioneer Homes. He graduated from Central Technical High School in 1974 and went to Tennessee State University (TSU) where he played basketball and football. His basketball team went on to the final four in 1975.

Upon graduating TSU with a Bachelors of Science, Billy was drafted by the San Francisco 49’ers to play football in the NFL; after that he spent a number of years playing professional football in the Canadian Football League.

Currently, he is the assistant athletic director, diversity and inclusion director of club sports and senior coach at the college.

Billy spoke about the hardships of his life growing up in public housing and how he’d almost lost his life due to being stabbed only inches away from his spine. He is thankful that there were people in his life at the time like his Coach Manny Breland, and that there were programs like sports and the Boys Club he was a part of that gave him a choice.

He attributes much of his life’s successes to the trust he placed in his coaches and other good people from those programs and the love they showed him. In fact, Billy still believes that “Trust and Love” are two quality factors of success and hence was a sub-theme of his speech.

Billy also spoke about his three C’s: “confidence, courage and choices.” He believes that those are three things that we all must develop in ourselves.

“We must make the right choices and have the confidence and courage to see them through,” he said.

He also spoke of a fourth “C,” which is character. Billy offered the following definition: “Character is a result of choices made and remade. It is lived and shown in people who have been developed, refined and defined.”

— Article and photos by Reggie Seigler, The Stand board member