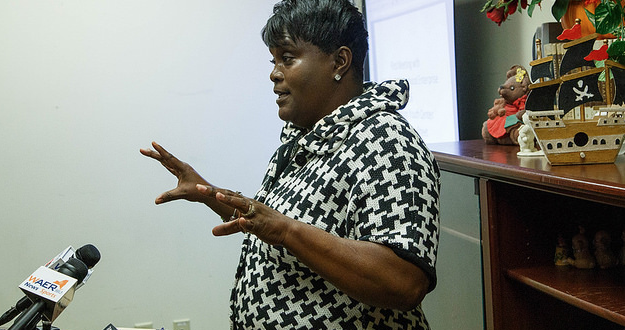 Mary Nelson opened up her center to community members, community leaders and grassroots activists for a forum on ways to help strengthen the anti-poverty efforts in Syracuse May 3. | Michael Santiago, Staff Photo

Community activist Mary Nelson brought together representatives from more than a dozen grassroots and community organizations in Syracuse to address the epidemic of poverty in the city. 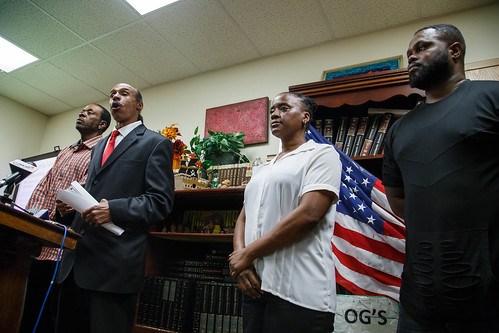 OG’s Against Violence had all its members present at the Forum to Strengthen Anti-Poverty Efforts in Syracuse held May 3 at the Mary Nelson Center. Members spoke on the importance of unity and help from community members in their mission to end gun violence in Syracuse. | Michael Santiago, Staff Photo

Nelson said the goal of the event was to bring together agencies with similar goals to form partnerships with the Mary Nelson Youth Center.

The event grew from a conversation between representative John Katko and Bob Woodson, the president and founder of the Center for Neighborhood Enterprise in Washington, D.C. Woodson was interested in the Syracuse area and contacted Nelson to propose an affiliation with the center.

“[Woodson] contacted [Katko] and said ‘listen here, this is your area. Will you bless it?’ And he blessed it,” Nelson said.

During the forum, representative Katko spoke about some of the roots of poverty in Syracuse and solutions to it. “There’s absolutely a direct correlation between poverty and education,” he said. “You can’t teach kids in the inner city the way you do in the suburbs.” 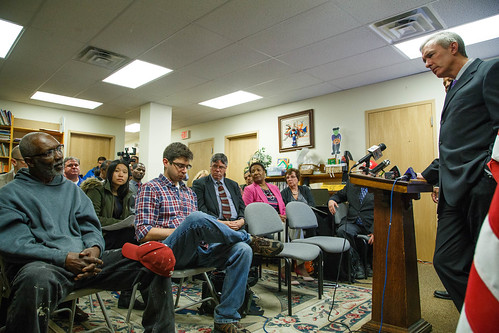 Congressman John Katko listens to the concerns and suggestion of a member of the Syracuse community of what needs to happen to alleviate the poverty issues that have continued to plague the city. | Michael Santiago, Staff Photo

Katko advocated for early literacy, crisis intervention and the importance of nutrition for kids. He also mentioned the tens of thousands of manufacturing jobs Central New York has lost over the past 30 years as a source of economic strife in the area today. Katko implored the community members to attend meetings for the I-81 reconstruction, to ensure that jobs go to local residents.

The highlight of the afternoon was a Skype call with Bob Woodson, whose flight to Syracuse from Washington had been cancelled.

“The key to revitalizing any urban condition is identifying the Mary Nelsons – people in the same zip codes – but they aren’t funded. The money goes to outside organizations,” he said.

Representatives from some of those organizations, like Syracuse University and SUNY Upstate Medical University, were listening. Maxine Thompson, assistant vice president for diversity and inclusion at Upstate, asked what role institutions like hers can play in addressing urban issues in Syracuse.

Woodson suggested that they take some grassroots leaders under their wing and provide them with the resources and train them to then deliver services to the communities.

Nelson said she hopes to be able to connect the families she serves with the grassroots organizations that can help them.

Nelson added that since she doesn’t receive funding to provide support, she wants to partner with organizations that do to point people in the right direction. Her focuses are education, health, career services, violence intervention and mentorship.

“I am giving myself to you. If you like what I’m doing, say ‘I want to partner,’” Nelson said.