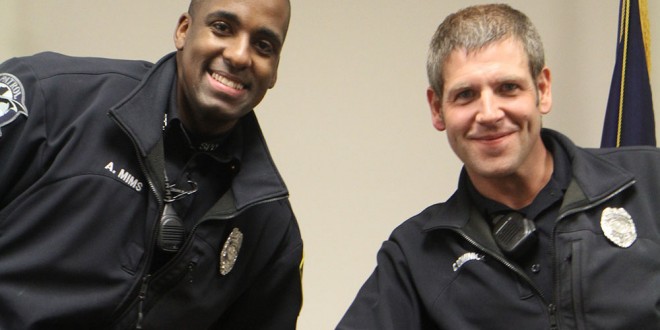 Syracuse police officers sit down for a Q&A 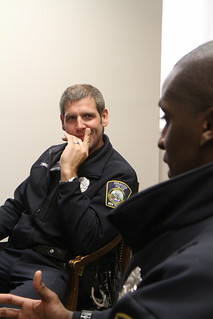 Christopher Dominick, left, and Ahmad Mims share a laugh while answering questions for The Stand about their jobs and patrolling the community. | Steve Davis, Staff Photo

Ahmad Mims, Christopher Dominick talk about their jobs and serving the South Side

The Syracuse Police Department is 93 percent white and 7 percent black, according to Lt. Eric Carr.

In an effort to do more outreach to the African-American community, Syracuse Mayor Stephanie Miner recently announced plans to open a satellite police office in the Southwest Community Center this spring. Carr said the new satellite office on the South Side of Syracuse will be open to the general public.

“The officers will respond to calls and problems in the surrounding community, take complaints from the office and attend neighborhood watch meetings,” Carr said.

Q: There are four new African-American officers in the Syracuse police class. This is something the minority community has been long concerned about and surely will be pleased about. Why do you think it’s been such a struggle to get the numbers up?
A: I talk to a lot of African-American high school kids and even people up to 30 years old, too, and they say they don’t want to be a sellout. They don’t want to have to arrest their friends. Be the bad guy. I think it’s great that we’re trying to get more African-American officers. There are a lot more white officers, but that’s because more white officers are applying for the job. We have to get more African-Americans to want to do this type of job, want to be role models. … I chose this career to reach out to people, white, black, brown, yellow, doesn’t matter your color, just being positive and trying to do the best I can for the community.

Q: From your personal perspective, why do you think it’s so important to have more African-American officers in the Syracuse Police Department?
A: Especially on the South Side, you can drive every block and you’re going to see a bunch of African-American families. I think it’s great there are more African-Americans on the force because maybe they will see them and feel more comfortable and see someone their same culture and maybe they feel more relaxed and they can talk a little better and open up a little more. Maybe they will say more to me as an African-American officer than they would to a white officer, or vice versa. I just think having a presence out there makes the community feel more comfortable.

Q: What do you hear from other African-Americans while you are patrolling your beat?
A: It was difficult at first because they see you and they’re like, “Oh, another African-American officer, you’re a sellout, you’re not really going to help us.” You know, being a black officer I try to get the community out of the mindset that we’re the bad guys. White, black officers, it doesn’t matter. Being able to talk. You have to treat everyone as a human being. A lot of times people say it comes down to color and that’s just a way of them not cooperating and that’s them not cooperating with law enforcement, whether black officer or white officer.

Q: This kind of “community policing,” getting more officers “out there” and getting a higher profile in Syracuse especially with the new addition of the satellite office on the South Side. Essentially, that’s all to build trust. How do you build trust while you’re on the beat?
A: I honestly just try my hardest to make sure whoever I am talking to knows they’re my No. 1 priority in that moment. That builds a comfort level. So then the next time, if they need to call us, they know they will be treated with respect. 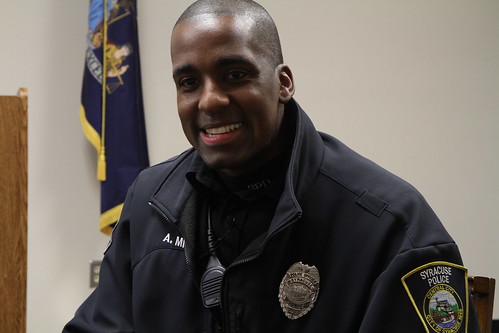 Q: What is your No. 1 wish for the Syracuse community?
A: It’s being able to have that relationship with the community. You know, if they have problems, questions, or concerns, we can help. I think having the new satellite office on the South Side will help that. We’re hoping and praying it does and in the long run it will bring the crime rate down and people will understand why we do what we do as police officers.

Q: What inspired you to become a cop?
A: I didn’t come from a family full of law enforcement, to be honest. I didn’t always want to be a cop. I didn’t decide I wanted to be a cop until I got out of college. But my life took me in a different direction and so I started studying for the police test and why not go to the place you grew up? You know, thinking about other people saying, “Officer Mims, he’s back here! He’s trying to help us out!” That inspired me when I was studying for the exam. I wanted to make a difference and be a positive role model. My father always wanted to be a cop but that never came to fruition. I guess my interest in being a cop started with him, but now I’m glad I’m doing it for me. I love this job. I love helping people. I love being a positive role model in the community. I love trying to make a positive difference.

Q: During your time at State University of New York at Oswego you received First Team All-SUNYAC in the 2005-2006 season and All-SUNYAC Honorable Mention in 2004-2005 for basketball. Has your success in sports helped you patrol the streets of Syracuse?
A: As soon as you answer a call, people size you up a bit. They see you and they’re like, “Oh, you look pretty fit, you play any sports?” And I’m like, “Yeah!” And then we start talking about sports and it relaxes them and eases them into a conversation. Then at least you’re not talking police, you’re talking sports. Younger kids look at me like, “Oh you can’t ball,” and I like to get out of the car and hang out and talk to the youth and play ball. Throw the football around a little bit. But they remember you! The next time they see you they flag you down and they’re like, “Hey! Rematch!”

Q: You’ve been on the force for just over 12 years. How do you build trust with people who call for your help?
A: Every call that I go on and every citizen I come in contact with I try to make it so that citizen says, “Remember Officer Dominick? He did everything he could for us.” I think most of us do that. I don’t think that’s just me. But that’s how I approach every call. This job can get stressful and we get frustrated and we get scared whether or not anyone believes that, but when you get to that point you have to step back and say, “What’s my main objective here?” It’s to build a better relationship with the community and I want people to remember me and think the Syracuse Police Department is a stand-up agency that is here to serve the community.

Q: What is your favorite memory from your time spent as a cop?
A: The thing that sticks with me is when I’m sitting in a parking lot doing a report or I’m going into a business to take a report, random people will come up and thank me. That’s not something that happens every day. Sometimes we, as police officers, forget that people do appreciate what we do. That really makes my whole week when someone says thank you for what you do or people will say, “I pray for you guys every night,” and stuff like that is very uplifting to hear. 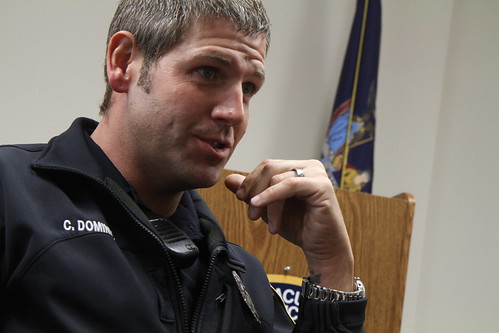 Q: What does it take to be a quality cop in Syracuse?
A: I think you need to be personable and be able to talk to people. Even if officer Mims and I pulled up on a call and people are fighting, I know that most of the police officers that I work with can defuse that situation without laying a hand on anybody. We are here to do a job and I think that’s the biggest part of the job. To let people know that we’re not bullies. We have a job to do. Just to be able to talk to people, that’s the No. 1 thing that a cop should be able to do.

Q: How do you think the new South Side satellite police office will help with community and police relations?
A: It’s going to make police more approachable. I think that a lot people are afraid and intimidated by the police when they don’t need to be. It’s going to be good to have this substation where if you have a problem, you can come talk to us. I’m here. I’ll listen.

Q: What inspired you to become a police officer?
A: It’s a family business. My brother is a police officer and my father is a retired police officer. But that’s not all. You’re probably getting the universal answer of “I wanted to make a difference,” and that’s the truth. Some people aren’t cut out for this job and some were designed for it. I think I was designed for it. I want everybody that I come into contact with to say that Officer Dominick helped to the best of his ability.

Q: What are some of the lessons your father taught you from his time spent with law enforcement?
A: My father was a state trooper and I remember him saying when he saw someone in need, when he came up on a disabled vehicle and it’s a single mom, he’d give her some money to help her out. I didn’t know any cops that did that when I was younger. And in my later years as a police officer and it occurred to me, I have it, why can’t I do something like that? And I have carried that lesson with me. My dad was always there to help people for 34 years when he did this job and he still does. He still wishes he was a cop. He lives vicariously through me now.

Q: You mentioned that playing football is a great way to connect with the youth as a police officer. Can you tell me about one time where you threw around the football with some kids in Syracuse?
A: Over on the Westside, during the football season, I saw a few kids throwing the football around and I said, “Run as fast and as far as you can,” and they caught it!  Man, I hit him. That was like during the playoffs. Those kids will never forget you. Then mom comes out, “You guys need anything to drink?” It’s great to do things like that when you can.