George Lynch has been teaching cursive writing to youth at the Southwest Community Center, training them to write the big, loopy letters normally associated with birthday cards from grandparents. Many kids no longer are taught this art, and Lynch feels that’s a big problem.

“I was telling them, ‘Hey, one day you’re all going to be successful, and people are going to want your autograph, so you need to know how to put that thing together,’” Lynch said. “So I had them sit down and do some cursive, and they really enjoyed it.”

Lynch, 24, is a motivational speaker who works at the Southwest Community Center, located at 401 South Ave. He travels to speak to groups of all ages and recently contributed a chapter to a motivational book. Lynch said he wants to offer advice that wasn’t available to him when he was growing up.

Lynch was born in the Bronx to a single mother. He played basketball throughout high school, using the sport as a vehicle to leave the neighborhood and attend college.

When he didn’t make the cut for the basketball team at Farleigh Dickinson University, he transferred to Tompkins Cortland Community College. There, Lynch played basketball and soccer, while taking classes in entrepreneurship.

After his graduation in 2015, Lynch moved to Syracuse, looking for a different environment. 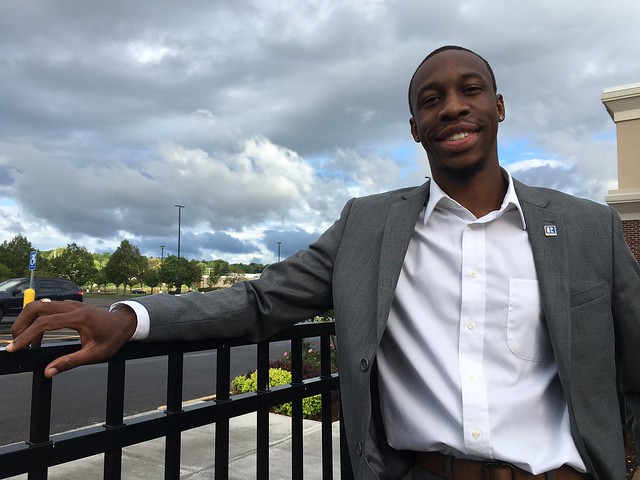 Learn more about George Lynch at his website Seed2Success.

Before figuring out what he wanted to do, Lynch bounced around among various jobs. He described how, when working in retail, he was staring at a pair of jeans when he realized that temporary jobs weren’t going to help him achieve his dreams.

“I told myself, ‘I’m done,’ and from that day forward, I called myself an entrepreneur and have been going ever since,” Lynch said.

He submitted his two-week notice at the retail job and continued working toward his real estate license. Soon, he was working in the field.

Lynch works to help the community in everything he does. Whether he is helping a family find a dream home, inspiring someone to pursue a dream, or helping kids learn to write cursive, Lynch says he pours his full energy into the job.

Dressed in a snappy suit one early weekday morning, Lynch says he works seven days a week, trying to be a positive effect on as many lives as possible. This could be in the form of a casual conversation with a stranger, or an organized presentation to a group of people.

Lynch landed his job at the Southwest Community Center after speaking to a group of kids there.

“We saw that he’s motivated, he’s well put together,” said Halston Canty, a youth counselor and substance abuse specialist for the center, who was so impressed that he offered Lynch a job. “He had a vision, and that’s very important.”

Lynch now works with groups of 15 to 45 at a time. He said a program such as this is vital for the South Side community. He wants to show the kids he works with that their lives don’t need to be dictated by whatever situations they are in right now.

Many of the youth Lynch works with believe the way to success is through being an athlete or a rapper. He wants to show them there are more options, such as becoming a doctor or lawyer.

Russell Robinson III said he has known Lynch for many years and has tried to act as a father figure. Lynch participated in a basketball program run by Robinson that changed Lynch’s life. Robinson said he always knew Lynch was right for public service and that he took the right route in life.

Lynch has “an innate leadership quality in him,” Robinson said.

This year, Lynch teamed up with Robinson to buy and provide more than 50 bookbags and sets of school supplies for children in Lynch’s hometown, the Bronx.

Lynch works tirelessly to improve his home and his adopted community. In Syracuse this fall, Lynch could be spotted smiling and clapping as he welcomed children back to school.

The community aspect of Syracuse is what drew Lynch to the city. He said one of his favorite aspects of the city, which is small in comparison to the Bronx, is how everyone is interconnected. People who attend his speeches often reach out to him, asking for further advice.

That, Lynch said, is his mark on the community.

“It can be enlightening that person or helping them to overcome an obstacle or just sharing some advice with them that will keep them going,” Lynch said. “I don’t want to motivate people for just five minutes. If I can enlighten you or share some gems with you that can help you prepare yourself for life, that’s the best thing in the world.”