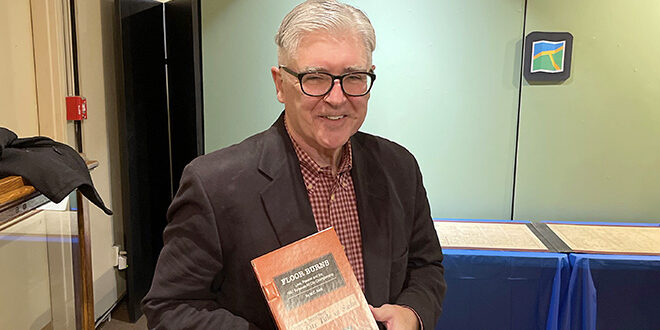 M.C. Antil’s non-fiction account centers on a high school championship game where an all-white team from a tiny Polish school is pitted against the racially mixed team from Corcoran High School, making it also the story of a small working-class city, its people and the turbulent times they shared. | Jeff Kramer

Author M.C. Antil had a problem. He set out to write a local basketball history on the long-defunct Syracuse Parochial League, the colorful 10-team affiliation of Catholic high schools and its outsized contributions to the game. But what happens when — after hundreds of interviews — you come to understand that the most important player was the construction of a 1.4-mile viaduct that was cleaving the town in two? And what if that epiphany leads to hundreds of additional interviews and a whopping 1,600-page manuscript?

The conventions of book publishing typically demand tough creative choices to trim so much material, but Antil is no conventional writer. He and his editor, Pete Alson, a relative of Norman Mailer, demolished expectations and produced a behemoth of their own, a five-volume set that uses a single high school basketball game as a lens to tell the larger story of how Interstate 81 decimated one of America’s most eclectic and successful urban neighborhoods.

“That was our city,” Antil said emphatically during a recent book signing at the Onondaga Historical Society. “It’s my soul on these pages.”

The Chicago-based freelance writer grew up in Westvale and attended Christian Brothers Academy. He began his project in 2003, got bogged down, abandoned it for eight years, got cancer in 2014 — and then got serious. He dove in again, this time  releasing excerpts online as he worked. The tactic generated interest, feedback, free fact-checking, more angles and, most importantly, motivation to keep going.

“At some point this was no longer writing a book,” said the 67-year-old author, now fully recovered. “It was a spiritual journey.”

If you wish to experience Antil’s spiritual journey beyond the five free chapters posted online at floorburnsbook.com, you’ll have to pay for the privilege. The book — “Floor Burns: Love, Passion and the 1967 Syracuse All-City Championship” — sells on that site for $89.95, plus shipping. It’s also available in the Historical Society’s gift shop, the DeWitt Barnes & Noble and at Doyle’s Books, an independent bookseller in Fayetteville.

It’s a price that so far 250 Syracusans, most of whom came of age in the heyday of the Parochial League, seem happy to pay. Assemblyman William Magnarelli bought a set at the signing.

“Those were good years,” Magnarelli told The Stand, concisely capturing the nostalgic vibe of the crowd of approximately 45 people.

Better for some than others. Dolores Brulé, 91, lived in the 15th Ward as the bridge went up. The Nob Hill woman was the first Black student to attend a Catholic High School in Syracuse — Cathedral — until she was told by the Mother Superior she’d be better off  “with your own kind.”

Brulé, who is in the book and was the only African-American at the talk, said she sees the 81 overpass as the consequence of pre-existing racism more than the cause of racism in Syracuse. That said, the bridge has provided handy justification to make subsequent race-based planning decisions. She cited the closing of Central Tech High School and replacing it with Fowler, a windowless, doomed-from-the-start institution erected in a waste field, as an example.

“The racism is what allows (81) to exist so governments can make (similar) decisions — because who’s going to care?” she questioned.

Of course, the ravages of “urban renewal” in the post-war era are not unique to Syracuse, but that’s a point Antil embraces. He hopes the universal aspects of the story, particularly in the Rust Belt, will lead to a miniseries. An audiobook is in the works.

Antil describes his book as a mosaic of stories, all building toward the epic 1967 All-City Championship between Corcoran High — a big, new and racially-mixed city school — versus the Parochial League champion Sacred Heart, a neighborhood fixture with 19 boys in its graduating class. Some have compared the book to “Friday Night Lights,” which used a small town high school football team in Texas as a backdrop to explore larger issues in American culture, including racism and economic hardship.

Still, at its core, the history is a tender ode to a bygone Syracuse and a tragic chronicle of its transformation into a less cohesive city, all hastened by an ugly overpass. Focusing on the basketball game works as both “an explanation point on Syracuse’s Golden Age” and a metaphor for wrenching change — change that was especially destructive to African-Americans and their descendants uprooted and isolated by the span.

Antil writes in  the forward:  “…into that void would step a new generation of working poor, many of them African-American, whose own unique and vibrant neighborhood had been plowed under in the name of progress, and whose quest for a small piece of the American Dream was going to be far more complicated than the people they displaced.”

It’s a happy accident that the tome arrives just as plans are being finalized to most likely raze the viaduct and replace it with a manicured boulevard. While Syracuse can never bring back the overlapping neighborhoods and parishes — Polish, Jewish, African-American, German and others that encircled downtown —  it does give Antil’s work a relevance beyond pre-viaduct nostalgia.

As Brulé reflected after the talk: “I was there when they built it, and I might live long enough to see it come down.”

Jeff Kramer is a reporter and columnist for The Stand. He has contributed to newspapers for many, many years in Syracuse and elsewhere. To contact him with story ideas, call (315) 420-2619 or email jeffmkramer@gmail.com