As an obstetrician, Dr. Kris Kratzert typically cuts umbilical cords, giving life and freedom to newborns. But on a hot morning in July, she stood before a large crowd and initiated a different kind of freedom.

“Today by cutting this ribbon, we give new life to men in our community,” said Kratzert, who served as master of ceremonies for a ribbon-cutting event to welcome Syracuse’s first tiny home for homeless veterans.

The two-unit tiny home was built by A Tiny Home for Good, a local organization on which Kratzert serves as board chair. The nonprofit aims to provide affordable, quality, dignified housing for homeless veterans.

Andrew Lunetta, the 26-year-old executive director, founded the organization two years ago with a mission to abolish homelessness in the city. 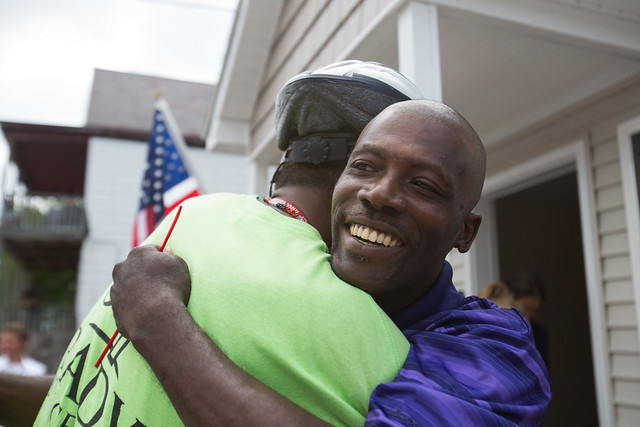 Dolphus Johnson embraces a friend after cutting the ribbon on his new tiny home on Rose Avenue.  | Dominique Hildebrand

The organization’s first tiny home, located at 112 Rose Ave., is now a permanent home for homeless veteran Dolphus T. Johnson and another veteran, who requested his name not be published.

Pastor Phyllis Lee, from the Heavenly Vision Apostle Church across the street, provided the morning’s blessing and said she was proud to be a neighbor to the tiny home and its inhabitants.

“We will be a spiritual light to them,” she said. “We are blessed to have a tiny home as our neighbor.”

Lunetta spoke next, thanking first and foremost Eloise Curry for selling him the property. For nearly two years, he worked to identify lots and secure properties to build sets of tiny home units. Due to pushback from residents, construction at several sites was delayed. But now that the Rose Avenue home is up, a second location will soon be completed at the corner of South Salina Street and East Glen Avenue, a property acquired through a donation.

Rev, who goes only by a first name, has served as the bike leader for Pedal for Possibilities for the past three years — another initiative started by Lunetta, to promote healthy living through bike rides around the community. Rev is slated to move into one of the next units and is excited to soon have a home.

“Me and Gazelle (the name he’s given his bike) hope to move in before the winter,” Rev said during the July ribbon-cutting ceremony. 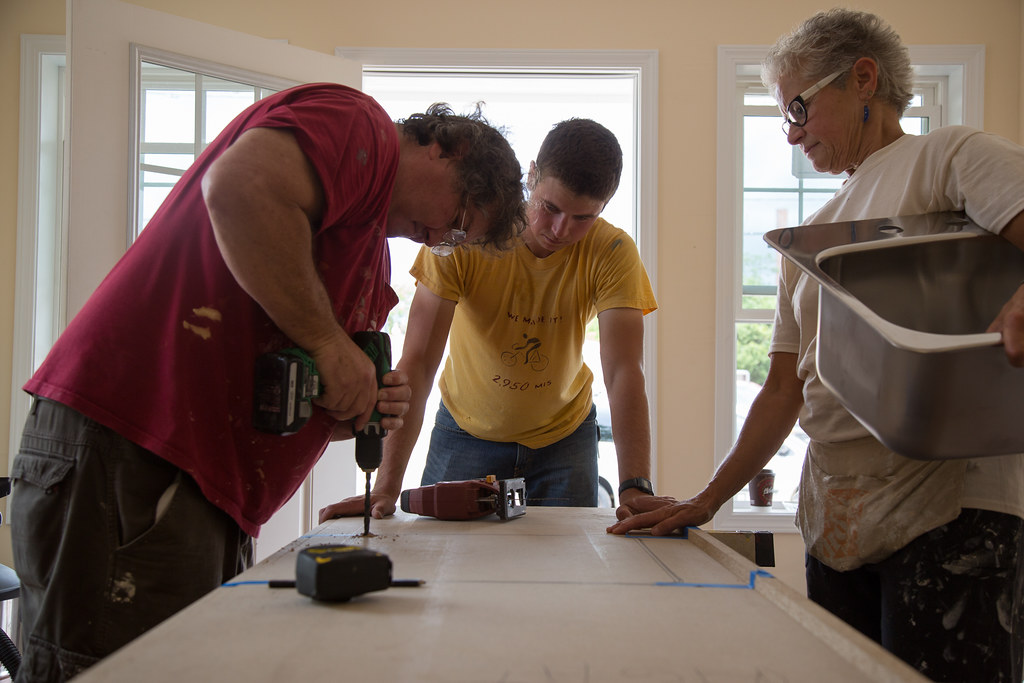 Andrew Lunetta, center, with Sean Redmond and Teresa Doherty install a sink into the counter top of A Tiny Home For Good’s first property the week before the ribbon cutting ceremony. | Aubrey Moore

Lunetta plans to have five houses completed and ready for rent by the end of 2016.

“It’s somewhere where someone will want to live for a long time,” Lunetta said.

Mayor Stephanie Miner said she was humbled to be present at the ceremony and noted that this is a time of tremendous soul-searching for the nation, with homelessness being a chronic issue.

“Local government can be a part of the solution to end homelessness,” she said, recognizing that Lunetta’s tiny homes provide an option for quality and affordable housing.

In terms of rent, residents who receive Social Security Income or Social Security Disability benefits will pay 30 percent of their monthly income, and those who work or have another form of income will pay $300 a month, Lunetta said.

Each house will measure roughly 250 square feet and will include a bedroom, kitchen and bathroom. While the houses aren’t large, Lunetta said they are much nicer than most homes people move into after initially leaving shelters.

“Guys move out of the shelter and end up in just these bottom-of-the-barrel apartments,” Lunetta said. “Drug-infested, prostitution, bed bugs — you name it. And they end up back in the shelter just a couple months after leaving.”