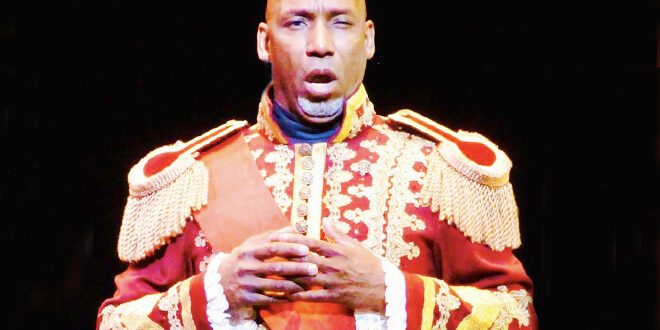 Gregory Sheppard, who grew up on Syracuse’s South Side, began his opera career nearly 30 years, debuting with the Syracuse Opera. | Provided Photo

How Gregory Sheppard challenges norms and diversifies the genre

If you ask most people what a bass is, they might tell you that it’s a stringed instrument that holds down the low end in popular music. Of course, if the question was written on paper some might say it’s a fish. But since this is a music column, we won’t consider that answer, unless of course they’re talking about “Big Mouth Billy Bass,” the singing fish. Then we’ll give them partial credit.

There is another kind of bass, too. It is the lowest singing (and speaking) range of the human voice. Upon hearing it, many will immediately think of singers like Melvin Franklin of the Temptations, Barry White or maybe even Alvin Chea of the vocal group Take Six. Since very few people can vocalize in that range, the sound is unique and easily distinguishable.

Gregory Sheppard is a bass singer, however, he has another uniqueness about him. He is a professional opera singer.

But Greg quickly ran off the names of eight or 10 Black opera singers to me. Some I had even heard of before. The list included Paul Robeson, Robert McFerrin, William Warfield and Todd Duncan. And there were women, too, like Leontyne Price, Marian Anderson, Jessye Norman and Audra McDonald. Most came from much humbler beginnings than the Central Village Housing Projects.

I have many memories of Greg growing up, as he and I both spent our pre-teen years living two doors apart. He attended the Tucker Missionary Baptist Church and began singing in the choir and taking piano lessons. He knew at an early age that he liked singing but also realized that his voice was not especially suited for the typical popular music of the day.

Greg eventually gravitated towards opera. He sings in multiple languages, including French, Italian, Russian, German and English. He was encouraged to pursue it professionally by his instructor Patti Thompson at Syracuse University. He has performed at operas and concert halls across the United States and in Europe, including but not limited to, the Syracuse Opera, Glimmerglass Opera, Central City Opera House in Colorado and the New York City Opera.

But how does a Baptist church singer gravitate towards opera? What similarities do both have, if any? What is the draw?

“The opera is very dramatic,” he said. “It has a lot of very good singing. The Baptist church is very similar in that way.”

“It’s about suspension of beliefs,” he said.

And that’s all he said, leaving the rest up to me to ponder.

It hasn’t been all glitz and glamour, Greg added. Over the years, he’s lived a lifestyle similar to many professional artists, sometimes working day jobs between gigs and doing what was necessary to persevere. He once taught himself to type and landed a job as an administrative assistant at a law firm. He says it was nice because the job allowed him take time off when he needed to perform. But it eventually reached a point where he had to choose between paying the rent or paying for professional coaching or voice lessons.

“Most of the time, I sacrificed the rent,” he said.

As time moved forward, he began to balance his singing career by teaching in his private studio and at New York University and Columbia University. He currently teaches at John Jay University.

Recently, Greg was asked by the Syracuse Opera to become a member of its board. His official title is the director of community outreach and engagement. The role is important as the field of opera seeks to re-organize and build diversity in all areas. Additionally, Syracuse Opera wants to develop a more diverse audience, so it will be trying some new and innovative things to attract attention to the genre.

Although he lives in NYC and his family has all moved from Syracuse to other places, he still comes home to visit his childhood church and to sing with the Syracuse Opera. He has done this regularly while maintaining a residence in the city since he moved there in 1986. So, accepting the appointment to the board of the Syracuse Opera was a perfect fit for him.

The questions I had for Greg were many, but several answers came from just one of his statements: “It’s about suspension of beliefs.” In other words, if I can suspend my belief that a Black child from the projects could never grow up to be an opera singer, then I just might.