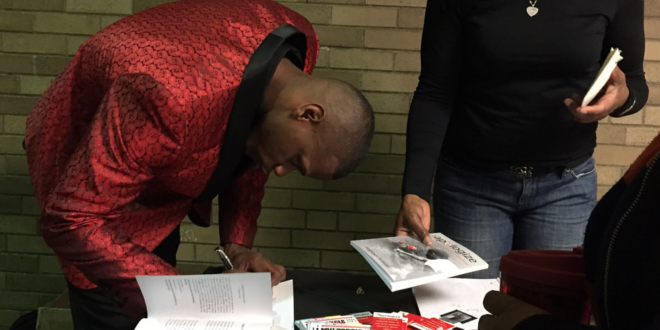 Rashawn Sullivan pauses while addressing the crowd at his Jan. 6 book-signing event. After a deep breath he says, “These are tears of joy. I went to prison at age 17, and now I’m here.”

Sullivan was released from prison in 2015 for committing a drive-by shooting in his youth that took the life of Jason Crawford. It took nearly half of his 17-year prison sentence for him to feel regret.

He shared that he grew up in and out of juvenile detention centers, had a mother and family addicted to drugs, and received guidance only from the young men he associated with in the neighborhood. Those factors, he said, led him to make such a rash decision based on ignorance. In prison, he found a higher power and worked to make changes.

Once released, Sullivan made a public apology to the Crawford family and vowed to inspire others. One effort he shared is that the money from his first book, “iApologize,” will be used to help establish a college fund for Crawford’s nieces.

“This is the time for us to reclaim our community,” Sullivan concluded. “It’s time to go to the next level to save lives.”

Sullivan organized the event not only to share his book, but also to unite the community. About 75 people attended to show their support, snap selfies with the author and read through a display of apology letters submitted by people in the community. 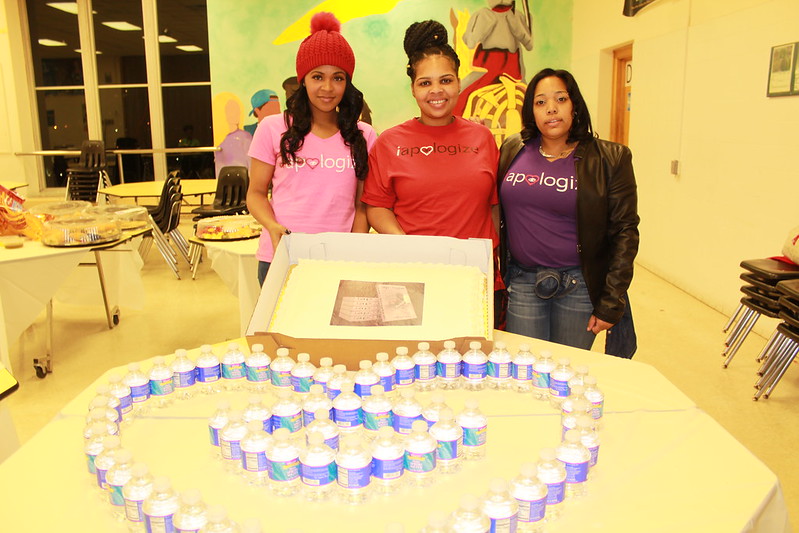 The letters — all focusing on a personal apology — were addressed to someone who had been wronged. Apologies were made to mothers, families or children, community members and even to the apology writers themselves.

Apologies were written for things such as: selling drugs, hitting a teacher, stripping and sleeping with men for money, being a bad mother, sleeping with someone else’s husband, smoking crack, stealing from their children and more.

One read: “I apologize for selling my kidz Christmas toys to buy drugs.”

But other apologies were written directly to themselves, apologizing for not achieving their own dreams.

“I apologize to my career for not following through,” stated one of them.

Clifford Ryans is with OGs Against Violence and is a strong supporter of Sullivan and his iApologize campaign. He contributed a letter apologizing to the community for retreating after his son’s murder in 1999.

“I turned my back on my community after his death,” Ryans said. “I think back on it and think of the difference I could have made sooner if I wouldn’t have waited nearly a decade to speak out and take action.” 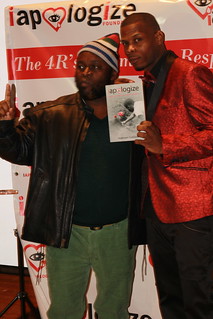 The letters played a powerful role in the event.

One local woman wrote a letter to the family of the man her husband murdered and apologized for her role in hindering prosecution by destroying evidence.

“The thought of losing him (her husband) to life in prison or the death penalty was unbearable … the day the police took him, I was pregnant,” her letter stated.

She also apologized to her children for losing custody of them because of her role.

“I spent most of your lives fighting to try and get you back.” She concluded that she wished she could go back and do everything differently, avoid the street life and put her children first.

Letters also were important in the creation of Sullivan’s iApologize organization.

“At the tail end of his prison term, we had a lot of letters back and forth,” said Timothy “Noble” Jennings-Bey, who runs the Trauma Response Team and works with Sullivan. The letters were a way for the two to discuss Sullivan’s vision.

“It takes a special individual to step across the line and make an apology,” Jennings-Bey said. “There’s not many that can do this.”