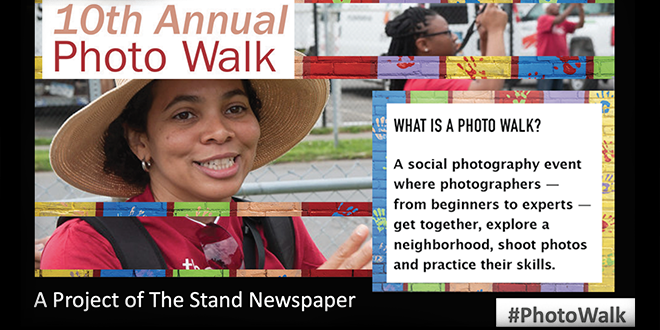 Mayor Ben Walsh read an official proclamation to a crowd of over 50 Photo Walk participants July 27 before the start of The Stand Newspaper’s 10th Annual Photo Walk.

On that bright, sunny Saturday four groups prepared for themed walks to capture the South Side neighborhood in photos. Over the past nine years, The Stand has organized a community photo walk each July starting on South Salina Street cutting through neighborhood side streets and into Kirk Park. This year, in honor of reaching a decade of documenting the South Side in photos, three additional walks were planned.

David Hass, creator of the Syracuse History Instagram, severed as lead volunteer of a Historic Photo Walk that visited seven historic sites along South Salina Street, including a tour inside the South Presbyterian Church currently for sale by the Greater Syracuse Land Bank.

Bob Gates, president of the Syracuse Camera Club, and Mike Greenlar, a photographer with Syracuse.com, led a walk around the I-81 Viaduct to capture the area and its residents before construction begins. Photographers stopped by Toomey Abbott Towers, Pioneer Homes and Wilson Park.

Nine members of the mentoring group Pretty Girls Rock also participated by covering the Get the Lead Out Block Party under the guidance of volunteers Annilese Perry, Marilu Lopez Fretts and Greg Munno. The girls followed their photography practice with one on literacy by drafting a short news story on the second annual Block Party organized by Tomorrow’s Neighborhoods Today Southside’s Housing Task Force.

Images from the walk are shared online, and some of the best are featured in each September’s print issue, which will hit newsstands this year on Sept. 7.

Participants in the 10th Annual South Side Photo Walk included: