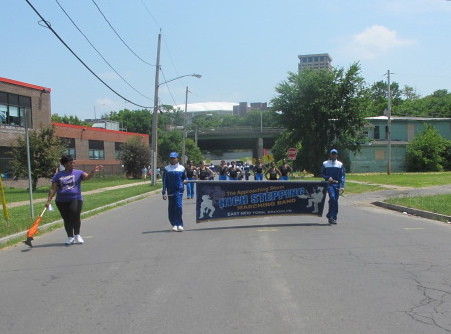 It was the trademark sound of the Approaching Storm High Stepping Marching Band, which had come all the way from Brooklyn to help celebrate Juneteenth on the South Side and in downtown by marching in the Visions of Victory parade on June 18, 2011.

Paula Gooden didn’t have to travel that far to commemorate Juneteenth. She just took a short ride with her fellow parishioners from Promise Land Church, located on 100 Eisenhower Ave. in East Syracuse. Gooden heard about the parade from her pastor, who encouraged all church members to attend.

The parade started at Dr. King Magnet Elementary School at noon and culminated approximately an hour later at Clinton Square in downtown.

The parade was led by Grand Marshalls Bea Gonzales and Ed Mitchell Sr. and, in addition to the Approaching Storm Marching Band, it included several local groups such as the Syracuse Peace Council, the Southwest Community Center and the Firefighters of Color United in Syracuse. Recent immigrants to Syracuse from Ghana, Congo and Somalia also participated enthusiastically in the parade both as marchers and as spectators.

This was Gooden’s first year watching the parade. “I enjoyed the marching band the best,” she said. “I’d definitely come back in upcoming years.”

Friends and families poured into Clinton Square Saturday afternoon, June 18, 2011, to celebrate the historic Juneteenth Festival by cheering on the work of their family members who participate in organizations and their work to improve their community.

“I think it’s very positive [what dad does] with the Elks Lodge. He’s teaching kids how to march, play on the drum line and it’s just something positive to teach and do,” said Yolanda Seegars, of her father Kevin Williams as she looked on with her sisters and family.

Chepaul Hye, 17, Quintin McKinney, 18, Jahcin Ingram, 19, and Kareeb Howard, 18, each were awarded $250 in scholarships from the Firefighters of Color United in Syracuse. Fireman Tyrone Sims told the audience how important it was for F.O.C.U.S to recognize the four young men who plan to attend college. Kareeb Howard and Chepaul Hye are already scheduled to attend SUNY Canton.

Andre Bullock looked on with his 6-year-old son Deandre Bullock in hopes that his son would take away more from Juneteenth than it being a nice day out for family. “I feel I need to show him something positive and people who are positive since the negatives are all everyone sees,” he said. 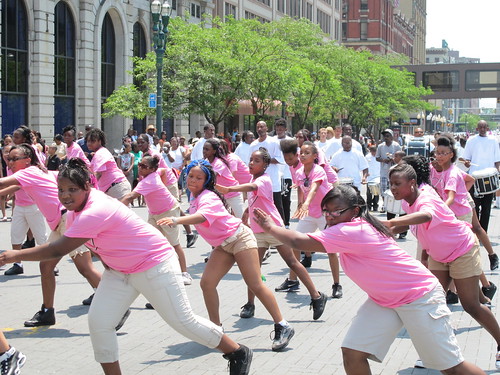 This was also an opportunity for start-up organization, Pretty Girls Rock, to show the strength of their mentoring group as the army of pink “pretty girls” and “baby girls” rocked the parade with dance numbers.

“It was awesome to see our girls out there rockin’ it,” said Carolyn Evans-Dean of her organization and daughters. The girls of Pretty Girl Rock go through a process to prove that they want mentorship as opposed to their parents wanting it for them, Evans-Dean explained.

Master of Ceremonies Dr. Rick Wright says every year he just can’t wait ’till Juneteenth. “I feel the spirit of our ancestors in this spot,” he said speaking of the historic monuments in Clinton Square.

Michelle Jones-Galvin and Joyce Jones, who point out their families ancestry to Harriet Tubman, watched and danced on as they repeated how comforting it was to be at the festival together with new and old faces.

James Williams Jr., a member of the Juneteenth committee, stood by to survey the crowd interaction. “It feels good to see a lot of people respond to this event. It gives me hope,” he said.