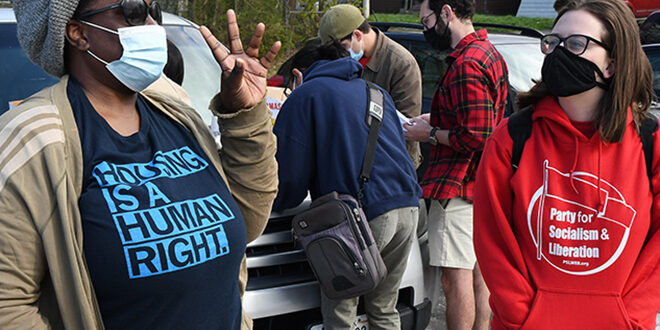 This weekend, the Party for Socialism and Liberation, alongside the Democratic Socialists of America, took our fight for housing justice to the New York State Fair, protesting the corporate-led attacks against the right to housing — brought to a recent head by the Supreme Court’s decision to end eviction moratoriums.

This decision, made to appease corporate real estate lobbies, brought a violent end to the final form of protection provided to those hit hardest by the pandemic. It is the latest chapter in a story of profits over people, and part of a merciless capitalist campaign forcing poor families into starvation wages to afford ever-increasing rents.

But while private interests tighten their grip, the people fight back. Our protestors, sharing personal stories of housing insecurity and government failures, brought a clear message to thousands of fairgoers: Stop the evictions and cancel the rents.

Institutional housing violence is policy choice inflicted upon us by the same capitalists that stole our eviction protections. As a path to seize back our rights and end this violence, we introduced our list of demands — a platform to achieve housing justice in Syracuse and positions that local officials must acknowledge as superior to profit:

We are encouraged by New York’s decision to extend its moratorium into 2022. Their actions are a testament to the power of the people making their voices heard. However, a moratorium cannot resolve the crisis, only delay it. Eventually, moratoriums will end and the eviction crisis will begin. The only resolution lies in the recognition of housing as a human right.