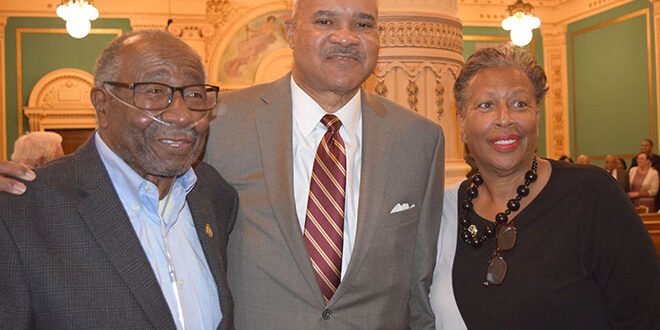 Van Robinson, left, joined other local leaders in 2019 to posthumously admit William Herbert Johnson, Syracuse University College of Law’s first Black graduate, to the New York State Bar. This was one of many longstanding injustices he has been a part of correcting. He stands with attorney Henry H. Melchor and wife Linda Brown-Robinson. | File Photo

Van Robinson has served the Syracuse community for nearly 45 years

These are all questions a young Van Robinson asked himself after moving from the Bronx to a new city in 1968. Robinson, who at that time had been asked by his company, Group Health Insurance, to open an office in Syracuse, decided to inquire about the city’s National Association for the Advancement of Colored People (NAACP) branch.

“Normally if you find someone there, they would know what’s going on in the community,” he said. But he soon came to realize that the city branch was inactive.

Several, including Robinson, petitioned national headquarters to reinstate the Syracuse branch, and 11 years after his arrival, the NAACP became active once again, offering local resources and addressing issues in the community, including housing, banking, education and policing.

Last October, Robinson was honored by Focus Greater Syracuse, a community-based organization that fosters citizen engagement, for his achievements, some of the most notable being the NAACP and his foresight on Interstate 81.

His former colleagues refer to him as a trailblazer, paving the way for milestones in public service; he was involved in the formation of the Citizen Review Board and helped strengthen the Minority and Women-Owned Business Enterprises (M/WBE) Program, which assists minority and female entrepreneurs in securing government contracts and grow their businesses.

The 84-year-old former Common Council president explained that the NAACP branch started with three interested citizens who wanted a city advocacy group, the ability to form allies and develop a branch to work through issues.

Now the branch has around 300 members, including several life members — the highest level of membership status. And although the chapter is named Syracuse-Onondaga, Robinson explained that the NAACP’s work extends to neighboring counties as well.

“We have made our attempt to be felt throughout the entire central region,” he said.

Since, Robinson has served as both vice president and president of the Syracuse NAACP chapter. Those visiting the New York State Fairgrounds can see his name in the Pan-African Village, renamed by former Gov. Andrew Cuomo in Robinson’s honor in 2018.

“He thought big about the community, about big change that would affect especially the minority or vulnerable community. And so now, folks who pick up that torch that Van started, they have that big dream too,” said city deputy clerk Patricia McBride.

Throughout his career, Robinson has been vocal about his opposition to Interstate 81 remaining in place due to its impact on the Black community. A 2020 report by the New York Civil Liberties (NYCLU) found that Black residents in Syracuse have higher rates of lead exposure and asthma than white residents. Robinson was the first elected official to ask that the interstate be torn down.

“I think when he started talking about 81, people were dismissive. They didn’t think it was real. They didn’t think it was going to happen,” said city clerk John Copanas, who began working on campaigns with Robinson in the ’80s. “Every time he saw the governor, the governor knew he was going to talk about 81. Every time he saw state representatives, he talked about it. So, he kept it in the forefront. (I think) if he hadn’t done that, we (wouldn’t) be where we are today. I don’t think anybody else could have made that happen.”

Besides Robinson’s achievements, those who have worked closely with him can speak to his kind spirit and flair. “Anything that the president could do to help you, he was there, and he always had a smile,” said Carmalita Sapp-Walker, administrator officer to the common council president, who met Robinson in ’99 when he became councilor at-large. “And they say Steve Harvey was a dresser. Nah, President Van Robinson was a dresser.”