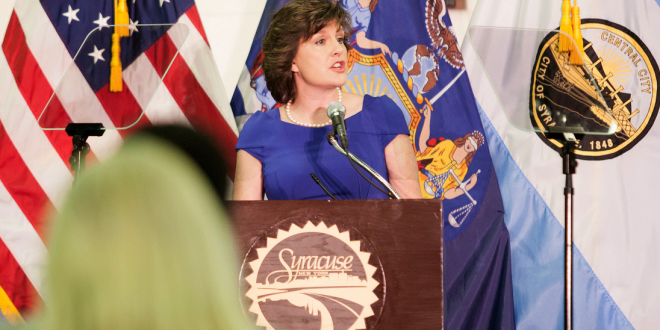 Mayor Holds 2016 State of the City Address in South Side

South Side resident Joe Niles has been driving his maroon Subaru Outback station wagon through Baldwin Avenue every day since buying it last summer. A single-block road, Baldwin Avenue looks like a lunar landscape. It is pockmarked with 33 potholes. If Niles drives from Baldwin Avenue across West Newell Street his vehicle has to go through the road on the 800 block of Kirk Park Drive, which is in a worse condition than Baldwin’s.

“There is a giant pothole on Baldwin, which is hard to avoid,” Niles said. “It damaged the bearings at the spindles of my vehicle’s wheel hubs and this affected my vehicle’s suspension.”

Syracuse Mayor Stephanie Miner wants to make it easier for Niles to report on his daily ordeal. On Jan. 28 she unveiled a new reporting system for potholes. “You can still reach City Line by calling 448-CITY, but starting today you can also submit service requests using our improved, easy-to-use webpage – cityline.syrgov.net. This new webpage allows you to submit requests for service for things like sewer backups, trash removal, and pothole filling and then track the status of your service request 24-hours-a-day online, or by phone during business hours.”

Miner made this announcement at her 2016 State of the City Address, the seventh of her tenure at the helm of Syracuse. She was introduced by Sharon Owens, chief executive officer of the Syracuse Model Neighborhood Facility.

Then the CEO described the center as a 26,000 square-feet facility, which opened in 1974. “It is an example of the government and the neighbors coming together to do something good,” she added.

“This public service agency is not a program. It is not an initiative but a movement.”

A common theme among several speakers in the program was that of poverty. The Rev. Regina Reese-Young, pastor of Hopps Memorial Christian Methodist Episcopal Church, on the South Side, mentioned the “costly poverty” afflicting Syracuse whereas Sue Boyle, Common Councilor for the 3rd District, stressed the connection between poverty and homelessness. She said that the city of Syracuse ended veteran homelessness in 2015. “Our programs have healed and changed lives. We have put names to the homeless,” she added. “We sleep better at night knowing that there are no more homeless veterans.”

Miner clarified this issue after asking the question, “Does this mean that there will be no more homeless veterans in this community?” She answered her own question in the negative. Before assuring that the veterans will “not be forced to dwell in homeless shelters in perpetuity,” she said that it will take a minimum of a month and a half to get permanent housing for them.

With respect to non-veteran homelessness, Miner praised the Housing First model by saying that it “has been extremely successful here in Syracuse.” The Housing First model primary goal is to provide homeless individuals or families with stable housing and then help them tackle additional goals that they may have, such as finding solutions for alcoholism, drug use, health issues, nutritional needs, unemployment, lack of transportation means, etc.

Among the crowd gathered in the SWCC’s gym to listen to the mayoral address was a delegation from the Brady Faith Center, a Catholic outreach ministry located just across the street from it. The delegation was composed of Mark Cass, president of the Board of Directors; Father John Schopfer, pastoral director, and; Kevin Frank, executive director. Frank met Niles while both were participating in the Pedal to Possibilities bicycle program sponsored by the ministry.

Frank coincided with Niles regarding the pothole problem on the South Side. “In our bike rides three times a week we struggle to avoid potholes,” Frank said. “I am waiting for the city to fix them sometime soon.”