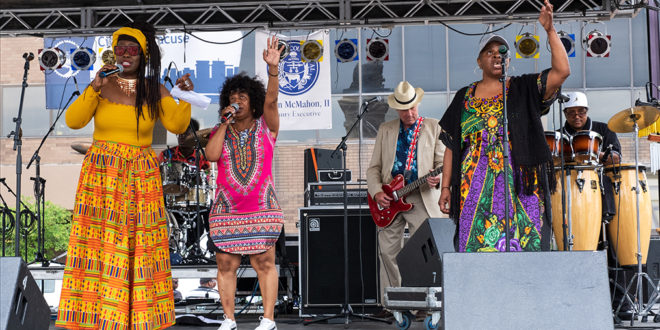 On his first visit to Syracuse’s annual celebration, our columnist puts locals’ loyalty to the test

This was my first Junetheenth festival, so shame on me. I’ve been missing out on a lot of great food, music and people-watching. My plan is to keep going back every year until I’m named Grand Marshal, but meanwhile I’ll need your patience as I perfect my Juneteenth groove.

Alas, there were a few awkward moments this past Saturday in Clinton Square. For starters, I spotted Lanessa Chaplin,  I-81 project counsel for the New York Civil Liberties Union, and promptly called her “Vanessa” by mistake. That didn’t sound right even to me … so I tried Larissa.

Finally we got it right. As faux pas go, it’s wasn’t on the same level as, say, soliciting campaign dirt on political opponents from foreign nations — more on that shortly—but I’ll need to do better if this Grand Marshal thing is ever going to happen.

Another weird  moment occurred as I was talking to Mary Cunningham of Onondaga Votes! She was distributing a flyer explaining that people with felony records are generally allowed to vote.

“That means I can vote!”  I exclaimed, expecting Mary to burst out laughing.

“Yes it does,” she confirmed.

So we need to clear that up. I’ve only been arrested twice, never for a felony.  The first time was when I was 15 years old and I got caught shoplifting a 5th Avenue bar, a vastly superior Butterfinger rival. If you wish to try one, they’re available at OldTimeCandy.com and at select retailers.

My other arrest was for failing a field sobriety test in 1988 despite being sober. I was handcuffed and driven to the State Police barracks, but they let me go after I blew a 0.00 into the Breathalyzer three times.

“Suspect is guilty only of being an incredible doofus,” the police report stated.

I wasn’t feeling much more graceful at Juneteenth, especially when I started broaching the subject of Donald Trump — perhaps not the best icebreaker at a celebration of African-American pride. See, I was still digesting news of Trump openly proclaiming his willingness to accept intelligence on political rivals from foreign nations, and I needed a reality check. Was it really such a bad thing for a U.S. politician to work with foreign governments to win an election?

Happily, there’s never a shortage of politicians at community festivals, so I started with Twiggy Billue, running for the Syracuse school board. I asked her what she’d do if Russian President Vladimir Putin called to talk campaign strategy.

“I’d probably hang up the phone,” she said. Then she re-considered and concluded she might not even let it get that far. “The moment I saw ‘Russia’ on the phone, I might let it go to voice mail.”

Mary Kuhn, running for the 7th County Legislative District, offered much the same, telling me she’d have no use for Putin, North Korea or any foreign agent trying to help her win her Democratic Primary on June 25.

“No one from another country is going to tell me anything about Joey Chiarenza that I don’t already know,” she said.

You hear that, Putin? Joey Chiarenza’s our business.

So it was with Vernon M. Williams Jr. Would he take dirt from a foreign power that would enable him to bury funeral director Charles E. Garland in the 16th District primary? Nope.

“Whatever information you have, you hold that. You keep that. That’s not what elections are all about. I want to win the right way.”

Even festival goers not running for office got nervous at the mere suggestion of seeking foreign help in their affairs.

I asked Yusef Abdul-Qadir, director the CNY chapter of the New York Civil Liberties Union, if he’d accept outside intelligence on what’s left of the pro-viaduct Save 81 crowd. Yusef said he’d call the FBI.

“It’s a national security issue,” he asserted. “I don’t collude with foreign adversaries.”

I asked Terry Spears-Bellamy at her jewelry booth if she’d seek dirt from the House of Saud or other jewelry stands if it would mean more sales for her. Not her style.

“Once people start doing things that aren’t right, eventually they’re going to sink themselves,” she said.

I asked David MacDonald, a retired Syracuse University art professor and founding member of the Community Folk Art Center, if he’d consult with foreign governments about sinking the Godzilla of the Syracuse art scene, The Everson and its world-class -but-temptingly fragile ceramics collection.

“We’re not trying to be The Everson,” he said. “The Everson would be safe.”

Only Darren Chavis, running his Creole Soul food stand, gave himself some leeway regarding foreign interference in selections. Darren told me he sometimes serves alligator sausages but not steaks because the meat tends to be tough. OK, then — would he listen to Russian intermediaries offering a marinade or some other trick to turn alligator steak into something sublime? Maybe.

“The day I stop learning is the day I quit,” Chavis said.

He stressed, however, that he’d refuse foreign help on his collard greens.

“I got that one covered.” he said.